WARREN CLEMENTS
Special to The Globe and Mail
Published September 30, 2011 Updated May 8, 2018

Pity the average used-car dealer. He tries to make a decent living selling previously owned cars and is painted in popular allusion after popular allusion as an underhanded, untrustworthy, conscience-free crook.

Now along comes the dark Canadian sitcom Call Me Fitz, in which the anti-hero, a used-car dealer, is an underhanded, untrustworthy crook. The difference is that Richard Fitzpatrick (Jason Priestley, once of Beverly Hills, 90210) has a conscience. Sort of. Despite his best efforts.

In the opening episode, Fitz swerves to avoid a rabbit and drives his car and a prospective customer over a cliff. As he regains consciousness, and before he shifts the customer into the driver's seat so he can pretend she was driving, he sees a man in a rabbit suit (Ernie Grunwald) peering down at him. Much later, the man (minus the costume) introduces himself as Fitz's conscience, unwanted within and therefore made flesh without.

Given the rabbit suit at the scene of an accident caused by a rabbit, the viewer is left to assume that his conscience deliberately drove Fitz off a cliff in order to teach him the error of his ways. The collateral damage – passenger in a coma, passenger's daughter intent on suing Fitz, possible charge of manslaughter hanging over him – seems a bit extreme, but then Fitz is nothing if not extreme.

In this amusing, cringe-inducing, adults-only black comedy, which airs on HBO Canada and will be released by next week on the DVD Call Me Fitz: The Complete First Season, there is no bad behaviour to which Fitz will not stoop if it can enrich him or get him out of a bind. His mother tongue is falsehoods. He steals from his employees. He uses sex to sell cars. He utters the 1960s Rat Pack phrase "ring-a-ding" a lot, while crooner Matt Dusk sings Vegas tunes on the soundtrack.

His conscience, by now using the name Larry, insinuates himself into Fitz's dealership, outsells Fitz on the lot and buys partial control of Fitzpatrick Motors. Slightly resembling the nervous character of weak brother Byron (Tony Hale) in the series Arrested Development, Larry acts boldly but looks most of the time as if he's expecting a hard slap. Grunwald won a Gemini in September for playing Larry, as did Tracy Dawson for playing Meghan Fitzpatrick, Fitz's sister.

The show, shot in Nova Scotia's Annapolis Valley with Priestley as producer and occasional director as well as actor, is full of quotable lines. Well, sort of. Quite a few of them aren't quotable in the pages of a daily newspaper.

Fitz's father is a holy terror. Fitz's mother, who deserted the family a long time ago, reappears briefly to turn everyone's life upside down. As played by Joanna Cassidy, she is even tougher than the replicant Cassidy played in Blade Runner, and is one of the few who can out-Fitz Fitz, to whom she says at one point, "All right, you botched abortion." Yes, it's all sweetness and light in the Fitzpatrick universe.

And Priestley has to be up for everything, including dancing around in his underwear. "The writers and I tried our damnedest to embarrass Jason during the shoot," the show's creator, Sheri Elwood, told The Globe and Mail earlier this year, "but nothing fazes him." Richard Fitzpatrick wouldn't have it any other way. 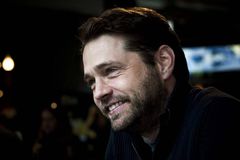 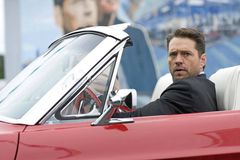 Jason Priestley is still a teenager after all these years
November 29, 2016
Follow us on Twitter @globearts Opens in a new window
Report an error Editorial code of conduct
Due to technical reasons, we have temporarily removed commenting from our articles. We hope to have this fixed soon. Thank you for your patience. If you are looking to give feedback on our new site, please send it along to feedback@globeandmail.com. If you want to write a letter to the editor, please forward to letters@globeandmail.com.
Comments