I was a bit taken aback by a detail in the opening chapter of Alix Ohlin's first novel, The Missing Person. Ohlin is the new chair of the Creative Writing Program at the University of British Columbia, which has been making headlines because of the suspension and firing of its former chair, novelist Steven Galloway. Galloway has said that he had been having an affair with a student – the main complainant in the case. She has said that her complaint was not about a consensual relationship.

If you could construct the ideal candidate to take over the program after a frankly ugly time, you might come up with someone fairly similar to Ohlin: Canadian, but educated internationally; respected and well-reviewed, with a CV that includes publication in The New Yorker and The Best American Short Stories – in addition to her own short-story collections and novels. Further, Ohlin has been living and teaching outside the country and therefore removed from the CanLit meltdown that followed Galloway's controversial firing. And bonus: Ohlin is a woman.

She began at UBC officially in January, and when we sat down to lunch, she was busy holding a flurry of meetings, getting up to speed.

There has been no shortage of media coverage of the program since Galloway was suspended in November, 2015, and fired in June, 2016. The case has sparked deep divisions in the Canadian literary community, particularly as a result of the "UBC Accountable" open letter calling for due process for Galloway, which was signed by many in the CanLit establishment (some of whom have since unsigned the letter). There have been divisions within the program as well.

Given this fraught recent history, I asked Ohlin whether she had any concerns about accepting the job.

"When I was thinking about it, I asked a lot of people for advice because that's how I tend to work," she told me. "And everyone said I should take it. … A couple of people who are alumni of the program, they spoke so warmly of it. They said: 'This is such a special place. Yes, it's had a hard time the past couple of years, but it has phenomenal teachers and people and you will be good for them and they'll be good for you.' It was just amazing actually that 100 per cent of the people I polled said they thought it would be a good match."

Ohlin, 45, was born and raised in Montreal, in a home filled with books; her father was an English professor at McGill University and her mother had been a teacher. Ohlin was an early, enthusiastic reader, pulling books from the shelves that were not necessarily age-appropriate – John Updike, for instance – and she started writing stories from an early age.

Her first teaching job was at a boarding school in Rhode Island, run by Benedictine monks.

"We had a book club, me and the monks," says Ohlin, who is not Catholic. "They were huge readers – these four elderly monks and the secretary. We would meet once a month and talk about books. That's the great thing about the arts. It creates a conversation and a container for common ground."

There, in her stark little apartment in the boys' dormitory, she wrote her first book, The Missing Person.

The protagonist, Lynn, is a grad student who has been sleeping with her professor.

"He was my adviser. He was married. We'd flirted my first year in grad school, slept together my second, broken up my third. It was something he did; I knew this now," she writes in the first chapter of the book, which was published in 2005. "All professors sleep with students, and then with other ones, and nobody is surprised."

I asked her whether that particular passage came up in any of her interviews for the UBC job.

"No, fortunately not," she said with a laugh. "That would have been very awkward."

Her collection Babylon and Other Stories was published the following year. Signs and Wonders: Short Stories and her second novel, Inside, were released on the same day in 2012. Inside was shortlisted for the Scotiabank Giller Prize and Rogers Writers' Trust Fiction Prize.

In 2004, Ohlin became an associate professor at Lafayette College in Easton, Pa. She has also taught elsewhere, including at McGill, where she was the Mordecai Richler Writer-in-Residence for 2016-17. (She has written reviews for Globe Books as well.)

When UBC began looking for a new creative-writing chair, it seemed like a good fit.

"I thought, well what could I do to support this program? What could I, as someone coming in from the outside, bring? And I thought, you know it really does make sense. I'm bringing this fresh perspective. I am Canadian but I've been living in the United States. And I can hopefully come in and support these people and help them move forward and see the glass is not just half-full here. The glass is actually a wonderful glass."

UBC boasts the largest and oldest creative-writing program in the country, with a long list of successful alumni, but even the biggest booster would agree it has been through a rough time, beginning with the November, 2015, announcement of Galloway's suspension for "serious allegations," as the announcement put it.

"All progress stopped. All writing stopped. Everything stopped," MFA student Elaine Corden told The Globe and Mail in an interview a year later.

"Obviously we are confused and we're trying to deal with everything that's happening right now and we're having to deal with informing a lot of people, obviously – our faculty and our students. So it's a hard time right now," Lyon told The Globe at the time. (Both have declined to be interviewed since.)

The faculty had to deal with an investigation into their chair – who was, for many, a friend – and, at the most basic and practical level, a sudden staff shortage. Professors found themselves with an extra load; Rhea Tregebov, for instance, an associate professor in poetry, took on an undergrad fiction class the following term.

"In addition to more work, obviously, there were all the external stresses that everyone knows about. So it was definitely not the ideal situation to be working in. … But I think we kept our eye on the ball," says Tregebov, who is now an associate professor emerita.

While the case continued to make headlines, classes became something of a refuge. "For the most part it's been kept out of the classrooms I've been in," says MFA student Meghan Bell, who specified that she was speaking about her own personal experience. "I think many UBC professors tried their best to not allow the scandal to impact students and their work, but of course it did. It was always kind of there."

There was a significant turnover in adjunct professors; some have alleged this was related to the Galloway case. While the number of applications for the graduate program dropped for the 2016 academic year from 2015, the number of applicants has bounced back and is higher now than it was before the controversy.

The addition of two new faculty members in January, 2017, Emily Pohl-Weary and Ian Williams, felt like a huge shot in the arm, says Tregebov, one of two faculty members who retired in this period (Andreas Schroeder was the other).

But there was still the matter of hiring a chair. Both Lyon and Svendsen declined to be considered. There was no shortage of applicants from outside. Last March, the short list was announced: Thalia Field from Brown University in Rhode Island, Brian Leung from Purdue University in Indiana, and Ohlin.

"It was an embarrassment of riches," says Tregebov, who was pleased with the outcome – including the fact that a woman was selected; about 74 per cent of the students in the program currently are female.

"I love [Ohlin's] work and it is also a bull's-eye for the kind of work that many, many, many of our prose students are doing. So seeing her as a teacher in the future as well as a chair, she's a huge asset."

Bell, who had read Inside and liked it very much, was also happy with the choice. "It was kind of exciting that it was a woman, especially after that history. And she seems really, really nice. I know it's a softball compliment, but it actually feels like one of the most important things right now is that the chair seems like a very kind person and somebody who will support students. And that was the impression I got from her and that I get from her."

Tregebov predicts Ohlin will be a popular thesis adviser. "I have a feeling that nine-tenths of the students are going to ask for her. I had one student tell me: 'Oh, everybody wants to work with Alix.' "

In the next few weeks, the program will hold two reading showcases – one celebrating new books published by faculty members Amber Dawn, Kevin Chong, Maureen Medved and Timothy Taylor; and another featuring three award-winning Indigenous alumni, Eden Robinson, Katherena Vermette and Jordan Abel. To be moderated by Ohlin, that event is called Writing the Future.

And that's what she is focusing on – the future. "I know it was an incredibly stressful time," Ohlin says. "Alumni are continuing to be affected, but I also think there's a real capacity for rebuilding. And I think this program in particular is more than just the sum of these past few years. It does have a long tradition of fostering talent. It has great alumni, it has the ability to recover that and to rebuild and find itself again."

Writing the Future will be held March 19 at the Robert H. Lee Alumni Centre at UBC, at 6:30 p.m. (creativewriting.ubc.ca/alumni). Writers in the Rereading Room with UBC faculty members will be held at the university's Belkin Art Gallery April 3 at 4 p.m. (belkin.ubc.ca/events). 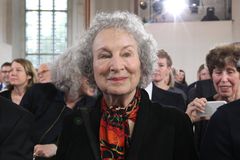 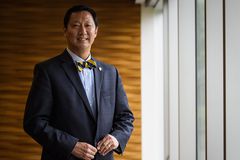