"Where there is danger, some salvation grows there too." – Johann Christian Friedrich Hölderlin

During the catastrophic siege of Sarajevo – launched 20 years ago this week – New York architect Lebbeus Woods risked his life to enter the blockaded city and, armed with his provocative renderings of jagged, deformed appendages crawling out of damaged buildings, stood on the steps of the burned-out Olympic Museum, fully exposed to Serbian snipers and artillery gunners.

"I am an architect, a constructor of worlds, a sensualist who worships the flesh, the melody, a silhouette against the darkening sky," he declared, holding his "scab architecture" up to the gathered crowd, knowing that Bosnians were being systematically cut down and that a strategy of urbanicide had begun. The National Library of 1896 had also succumbed to mortar attack, burning for two days and turning more than one million books to ash. Woods remained, like the local architects who surrounded him, unfazed. "Tomorrow," he said, "we begin together the construction of a city."

Two decades later, Woods's exhilarating manifesto and his portfolio of War and Architecture drawings, published by Princeton Architectural Press, still matter. Back then, I was the editor of an architecture-and-design magazine called Insite when I published the colour renderings on our cover. They presented distorted growths crawling like parasites up and over scarred buildings. Even while the apartments and civic institutions of Sarajevo crushed people living inside, the drawings affirmed architecture as a powerful agent of collective memory and vessel of consciousness.

They suggested, too, a form of healing, by applying – like a poultice – new interventions to old structures, a principle of rebuilding that applies to cities devastated by war or natural disaster as much as it does for cities in China, Brazil or India (and, yes, Canada, too) undergoing rapid urbanization. Importantly, as historic buildings continue to come down all around us, including mid-century classics of modernism, Woods has placed his faith in a sensitive, aesthetic collage of historic and new.

Depending on who is doing the parsing, his advice is either embraced or rejected. After being crippled by a 1995 earthquake, Kobe, Japan preferred a sterilized version of urbanity, replacing a tight, historic grid and intimate back lanes with suburban-scaled roads to allow fire trucks to move swiftly to residents in the case of another disaster. Though we know that a plasticized remake of neighbourhoods saps citizens of a collective memory, the Meiji-style wooden housing in Kobe was knocked down rather than repaired, then replaced with aluminum-clad prefab houses. Faced with displacement and disoriented by the loss of their traditional homes, the elderly suffered dramatically increased rates of suicide.

Since the 1960s, practitioners and philosophers have seriously questioned the broad assumptions of sterilized urban forms. French critic Roland Barthes asserted that the city speaks to its inhabitants and that they speak back. But let's face it: All too often, city-building is about brutal, unfettered demolition – even after a natural or man-made disaster.

After suffering a massive earthquake in 1963, ancient Skopje, Macedonia, organized a worldwide competition to rethink its historic centre, with substantial backing from the International Union of Architects and the United Nations. Some of the city's cultural monuments were preserved, but the winning architect, Japanese modernist Kenzo Tange, launched an assault on the finely grained city, imposing high-rise towers conceived as "city walls" on low-scale residential neighbourhoods – despite strong opposition from the local population.

"Such people," it was reported, "could be re-educated to accept high-rise and medium-rise living." Much of Tange's linear city was built, although a local team of architects managed, fortunately, to protect some of the city's riverside marketplace districts.

In Cologne, Germany, tragically flattened during the Second World War, a different kind of reconstruction has taken place. Postwar, its intimate medieval street pattern was rebuilt while urban motorways around the edge of the city were constructed.

And at the city centre, rising from the bombed ruins of the once-magnificent gothic St. Columba church, a jewel of sensitive, life-affirming reconstruction has been accomplished. In order to house its collection of art spanning a millennium, the Roman Catholic Archdiocese organized a design competition, and in 2003 ultimately awarded the commission for an art museum to the acclaimed Swiss architect Peter Zumthor, a master of sensory, carefully crafted buildings.

As if weaving a tapestry of time, Zumthor created new volumes of exhibition spaces and courtyards by building walls of soft-grey brick, perforated to allow shards of light into the interiors while preserving the half-destroyed walls of the Gothic church, as well as fragments dating back to the medieval period. In different hands, without patience or equanimity, the holy Columba might have been simply reduced to rubble. "There is no difference between old art and new art," Zumthor quietly pronounced at the Kolumba Diocesan Museum's opening in 2010. "Only, I suppose, between good art and bad."

In recent years, Woods has clarified that his War and Architecture drawings, provoked not only by Sarajevo but also the crippled cities of Baghdad, Kabul and Tripoli, were never intended to rob local architects of managing the necessary rebuilding. Occasionally, Woods's disturbed, parasitical forms have been misread as aestheticizing violence. To me, they contribute importantly to an ongoing and still-unfinished story about how to rebuild the postwar city.

This summer, in Chengdu, China – one of those megacities undergoing constant waves of demolition and rebuilding – Woods shifts from paper to practice. His Light Pavilion – a forest of illuminated steel columns encased within polycarbonate sleeves – is carved within the volume of an office tower by American Steven Holl Architects, giving the building an open, beating heart.

As the world remembers the siege of Sarajevo, I can't help but think of the way architecture pumps blood to citizens. It shelters and, yes, it also destroys. But, its reconstruction, when sensitively accomplished, nearly always helps resuscitate the human spirit. That's something to count on when the bombs and wreckers' balls come crashing down.

For more on architecture and design from around the world, follow Lisa Rochon's blog, chasinghome.org. 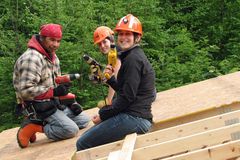 At the United Nations, updating a modernist icon
May 8, 2018 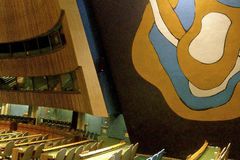 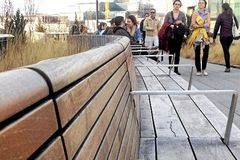 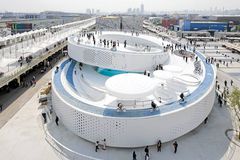 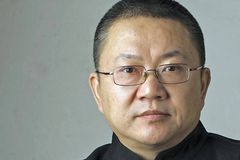