These days, any viral Instagram photo can show up on a million screens in an hour. Still, there remains an old-school thrill to having your photo reproduced on a postage stamp.

Seven Canadian photographers have joined the small club of those chosen to adorn our postage, in Canada Post’s latest batch of issues honouring the country’s robust art photography. As with the first seven-stamp issue in 2013, images for the new stamps were chosen after deliberations by an independent panel of seven curators and visual arts mavens.

The list includes century-old studio images by William Notman and C. D. Hoy, street photographs by Michel Lambeth, Fred Herzog and Louis-Prudent Vallée, a landscape shot by Edward Burtynsky, and an interior image by Lynne Cohen, who died last May.

Only two of the photographers honoured – Burtynsky and Herzog – are alive to savour the moment.

Burtynsky, known worldwide for his large colour photos of altered landscapes, was unavailable to comment on the experience of seeing his Rail Cuts: #1, 1985 shrunk to postage-stamp size.

Herzog also noted that stamps and stamp collectors aren’t what they used to be. His efforts to pass on his late wife’s stamp collection found no takers.

The idea of seeing his work in miniature is not new to the 83-year-old photographer, who once planned to exhibit 1,000 contact-sheet images of sunsets. He has no complaints about the image quality on his stamp.

“It’s terrific,” Herzog said. “I’m going to photograph it with a macro lens, blow it up, and hang it on the wall.”

Here are five new photography stamps you can write home about: 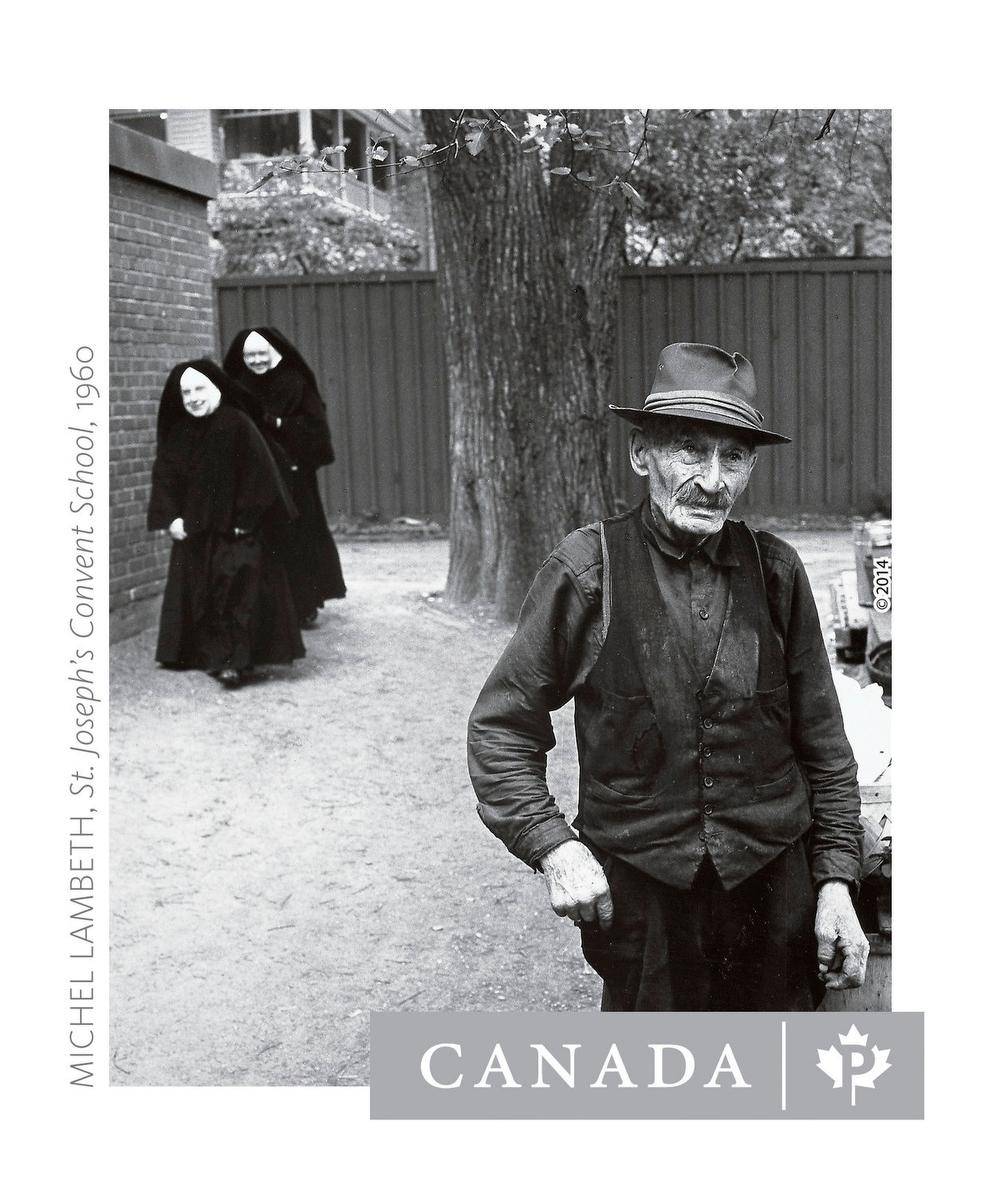 Lambeth’s main subject was the vibrant street life of mid-century Toronto, especially Kensington Market. This unusually enigmatic image focuses on the creased hat and face of the old man in the foreground, while two laughing nuns slip past in the background. A current member of the Sisters of St. Joseph of Toronto has identified the man as Archie, a retiree who did light chores for the Sisters, a once-robust order that founded several schools as well as the Daily Bread Food Bank. 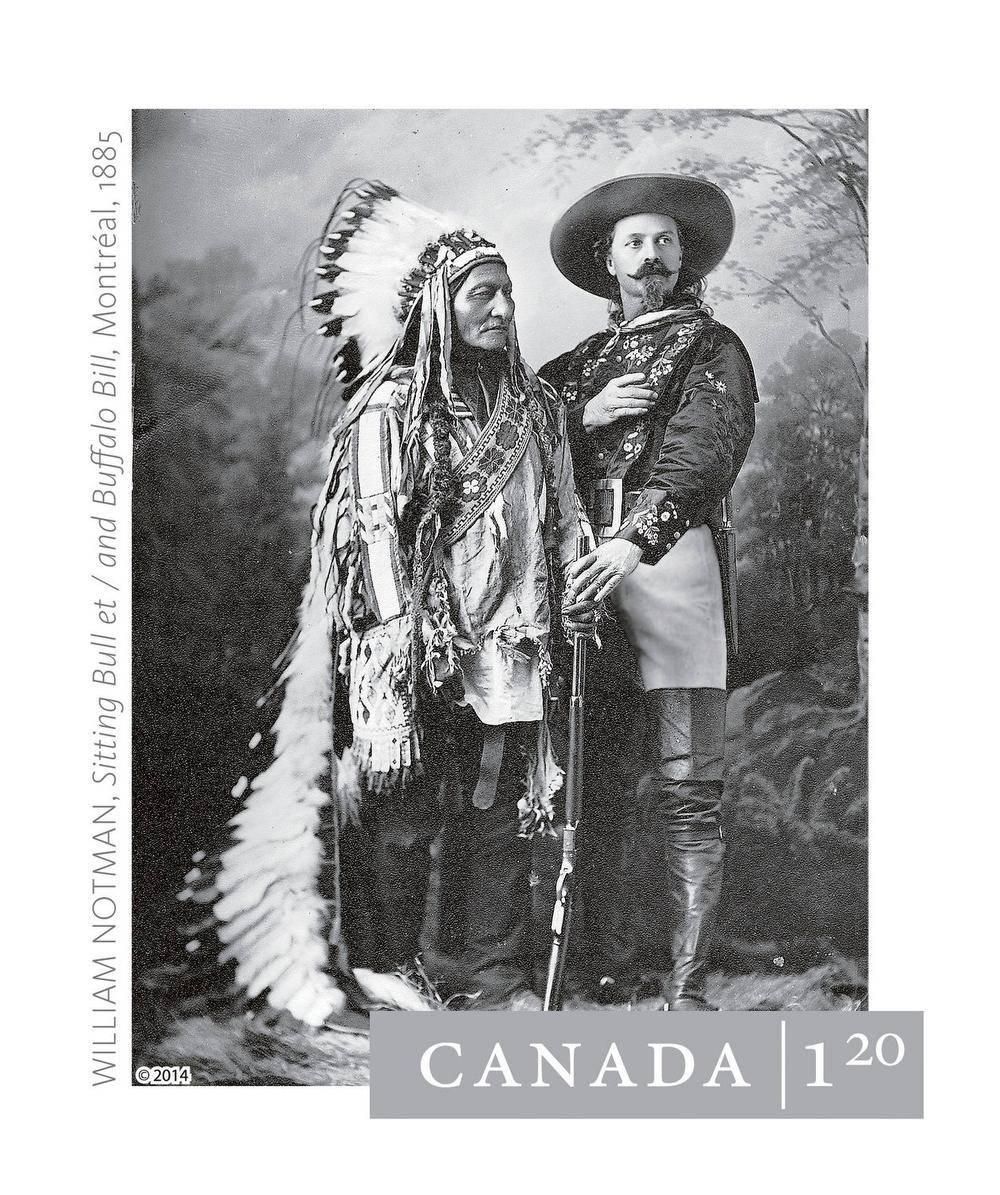 William “Buffalo Bill” Cody was visiting Montreal with his Wild West show when Notman snapped him with one of his star attractions, Lakota Sioux chief Ta-tanka Yotanka (Sitting Bull). Cody’s foppish romantic posturing and the chief’s granitic presence strike a contrast that York University art historian Sarah Parsons rightly calls “decidedly awkward.” Unless colonial dissonance was the point of its selection, Canada Post might better have chosen one of Notman’s striking portraits of the chief alone. 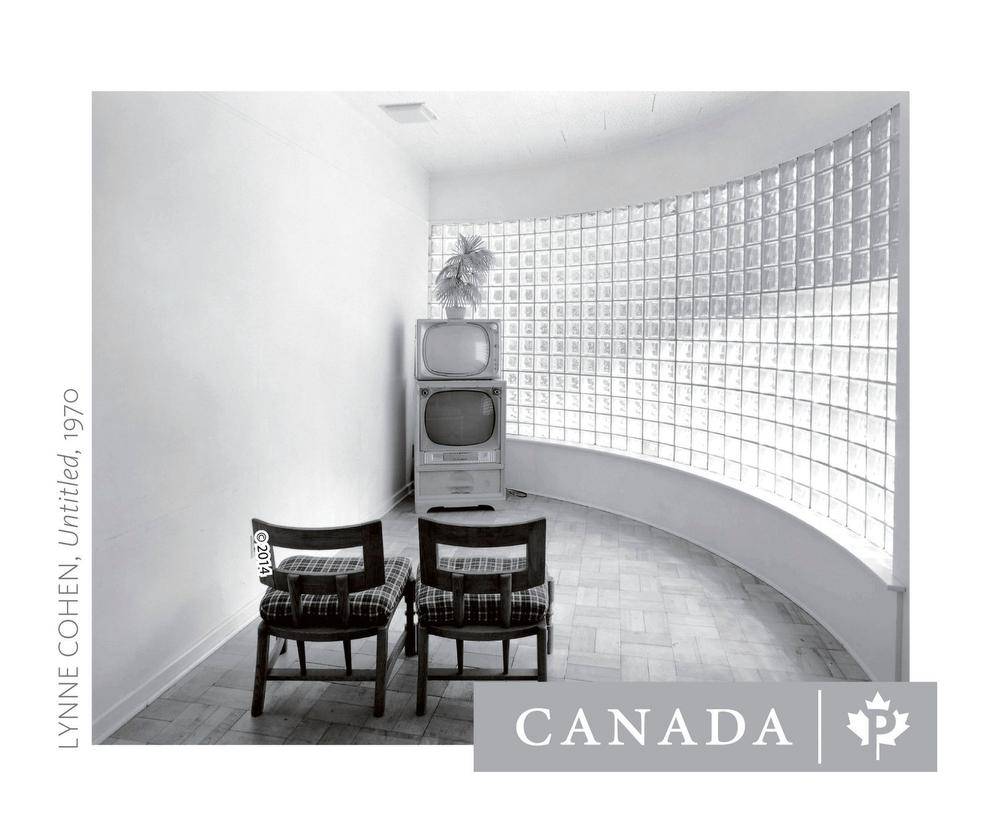 Cohen’s witty image of retro chairs and TVs looks like a photo of an art installation, though she famously did not build the eerie environments she captured with her camera. The photo is both a formalist symphony of rectangles and an homage to a tidy corner of obsolescent life. The cut-outs in the chair backs, like the blank TV screens, offer a way of seeing where there is nothing to see but the means of looking. 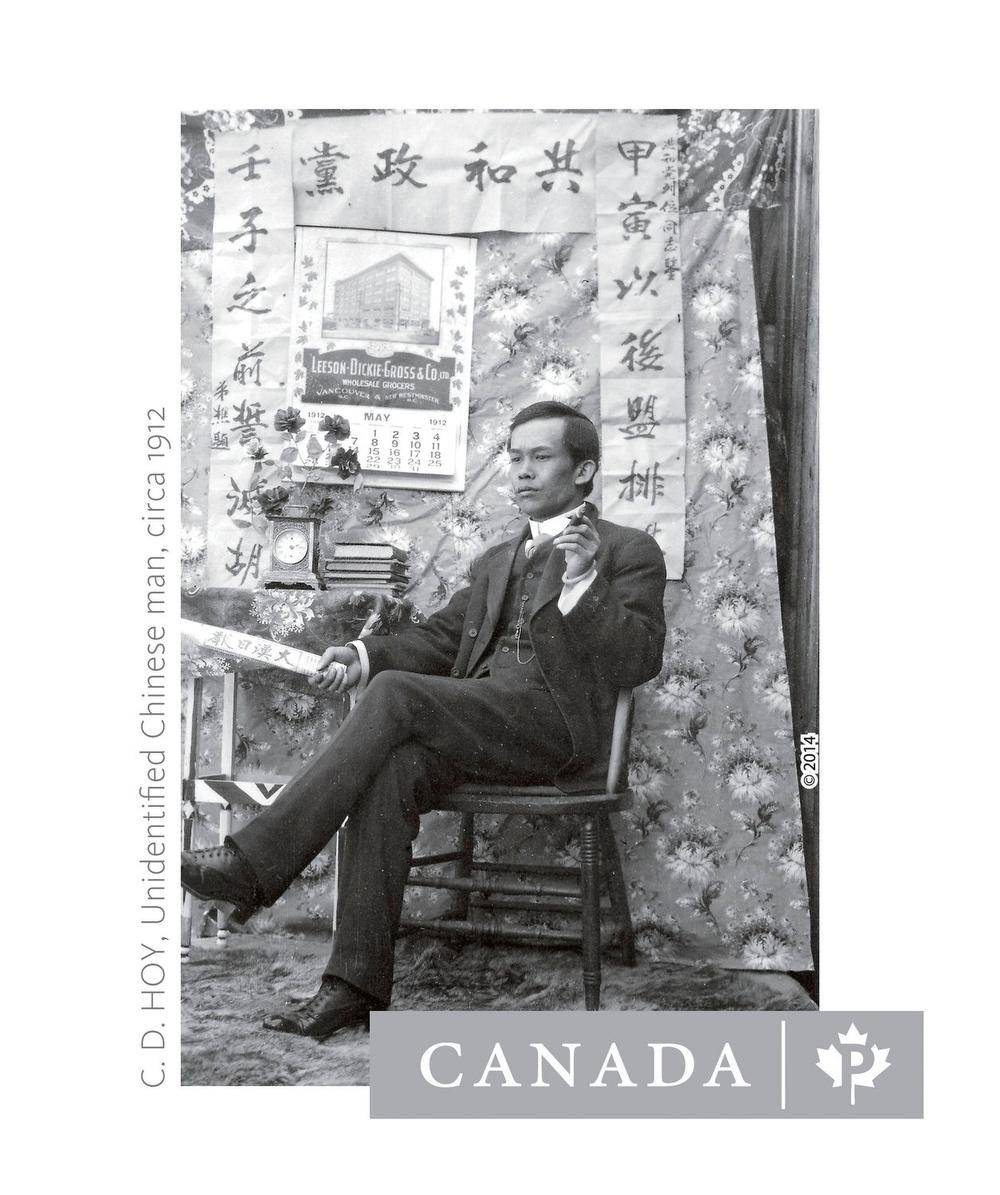 The natty Vancouver gent smoking a cigar in his three-piece suit has a natural, contemplative air that’s rare in vintage studio photography. The banners behind him may offer a clue to his thoughts: The Chinese characters hail “comrades of the Republican Party” established by Sun Yat’sen in 1905 with the goal of overturning China’s Qing Dynasty. The left banner also refers to the party’s vow to “defeat the foreign invaders” – an intriguingly political slogan to find on a Canada Post stamp.

With a file from Yu Mei. 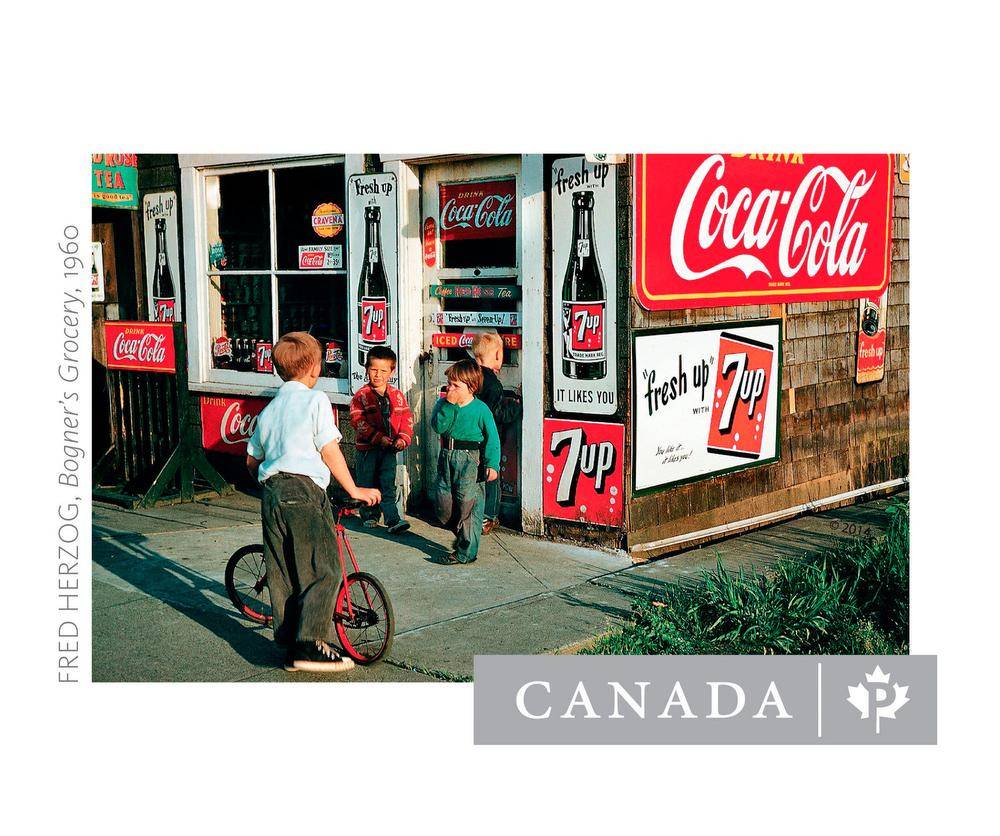 Coke and 7-Up duke it out for mastery of the colour red, in this dynamic image of daily life amid a blizzard of commercial imagery. Herzog had a fixation for signage like this, which he calls the “casual art” of North American street life. His very slow Kodachrome film (ISO 10) demanded a fast camera and a nimble shutter finger to capture the boys’ implied narrative (and red bicycle) in a Vancouver grocer’s doorway.