All that's missing are the frankincense and a Gesualdo motet on the sound system. But visitors to Patti Smith: Camera Solo, opening Saturday at the Art Gallery of Ontario, won't have any trouble conjuring up that aroma and that music as they wander among the 75 or so photographs, sketches, assorted objets and one video installation that make up this much-anticipated exhibition.

Smith may have declared in 1975, in her famous recasting of Van Morrison's Gloria, that "Jesus died for somebody's sins/Not mine." But lapsed Catholic though the 66-year-old may be, the sensibility on display here – and Camera Solo is nothing if not an exhibition of sensibility – is so profoundly religious that the viewer is transfigured into a sort of supplicant, the AGO into a sepulcher and the memorabilia and photos – spectral black-and-white silver gelatin prints, 8.5 cm by 10.8, that Smith first shot as Polaroids – into relics imbued with the legendary poet/musician's own veneration. It's clear that over her peripatetic 40-year career, Smith has travelled as much as pilgrim as touring musician. And if art galleries truly are the new churches of our secular age, then the Smith show, overseen by Sophie Hackett, the AGO's assistant curator of photography, is nothing less than a feat of reconsecration – a point most forcefully driven home by the three suites of five images on the south wall of the main exhibition space, each arranged like the Christian cross.

At a time when notions of "beauty" and "the hero" are if not thoroughly discredited then severely bruised, it's something of a shock to come across a show that so unabashedly and worshipfully subscribes to them as virtues. Allen Ginsberg proclaimed more than a half-century ago: "Everything is holy! Everybody is holy! Everywhere is holy!" And damned if that catholic embrace, the eminence of the immanent, informs all aspects of Camera Solo – from the displays of the cup that Smith gave her father to mark the centennial of Dickens' death, to a large rock the artist plucked from the shores of the River Ouse where Virginia Woolf drowned in 1941, to the embroidered slippers of Pope Benedict XV, to photographs of Hermann Hesse's typewriter, Walt Whitman's tomb, the headstone of William Blake, the spoon and fork used by Arthur Rimbaud.

Images and mementos of Rimbaud, in fact, along with those of Smith's former co-vivant/soulmate, the late photographer Robert Mapplethorpe, loom large in the exhibition. Indeed, the largest artifact in what is otherwise an intimate show is a full-scale reconstruction of the litter that carried a gangrenous Rimbaud up and down the mountains of Ethiopia in the late 1880s. Smith commissioned the replica in 2009 and inscribed some of the doomed poet's last words on one of its shafts. At the AGO the dark litter is like a bier or Charon's boat to the underworld, shrouded in netting and mounted on a large white plinth near the centre of the main exhibition space.

Like Rimbaud, Mapplethorpe gets his own vitrine here and it includes a cross the photographer owned, a mixed-media totem to Rolling Stones' founder Brian Jones made by Smith and Mapplethorpe in 1969 in the Chelsea Hotel and old photo-booth shots, among other artifacts. It's Mapplethorpe, in fact, who provides Camera Solo's sexiest moment – a small photograph he took of Smith in her 20s, the artist crouching on a stool, in high heels, legs bared, calves flexed, staring forthrightly into his lens. Lent by two Toronto collectors, Patti Smith (with Thunderbolt Tattoo) delivers a heady hit of eros in a show otherwise heavy on thanatos.

An iteration of Patti Smith: Camera Solo was first mounted in fall 2011 at the Wadsworth Atheneum Museum of Art in Hartford, Conn., then moved to the Detroit Institute of Art last spring. The AGO's Hackett didn't see either of those exhibitions but did meet with Smith last August in New York to discuss her ideas for the AGO presentation. Since then they've had "a long-distance collaboration but a really wonderful collaboration nevertheless," notes Hackett. Smith will, in fact, see what has been wrought March 7 when she performs two evening shows of song and poetry at the AGO.

The artist likely will be pleased. Unlike the Hartford show, which "had groups of photographs organized according to types – here are writers, here are family pictures, here's where she went to Scotland," Hackett's show has the pictures hung chronologically, although not slavishly so. As a result, there's "a sense of walking into her world," of connections being made among art, life, enthusiasms, living family and dead friends. It's a modest show but rich in its austere elegance, the photographs and mementos potent emblems of the unceasing intensity of Patti Smith.

Patti Smith: Camera Solo is at the Art Gallery of Ontario, Toronto Feb. 9 through May 19. (www.ago.net) 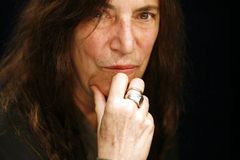 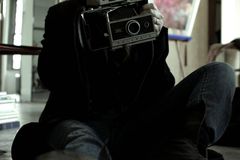 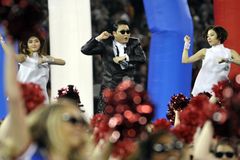