The Art Gallery of Ontario has plucked the head of a low-profile museum in Hawaii for its top job, concluding a seven-month search with an announcement Wednesday that Stephan Jost will become its new director and CEO in the middle of April.

Mr. Jost is the director of the Honolulu Museum of Art (HoMA), an institution that, while much smaller in scope and ambition than the AGO, has enjoyed significant growth and stabilized finances under his leadership over the past five years.

He replaces Matthew Teitelbaum, an AGO veteran who served as director and CEO of the Toronto institution for 17 years and shepherded a $276-million renovation designed by Frank Gehry that won international acclaim. Last June, Mr. Teitelbaum, who previously served as the AGO's chief curator from September, 1993, to July, 1998, left to become director of the Museum of Fine Arts in Boston.

"Toronto is an amazing city. It's going through huge demographic changes, it's extraordinarily prosperous, and relative to almost any other city this size, it's very well run," Mr. Jost said in an interview with The Globe and Mail. "The AGO is a central cultural player and it's pretty exciting for the chance to lead an institution that has really done all the foundational work: They've got a great staff, they've got a great building, they're in a great city. How do we use this, to frame global cultural conversations that are important, through the art?

"I feel strongly that cultural institutions need to be active parts of civic conversation." He added that engaging newer citizens is one of his priorities. "Honolulu is basically 50 years ahead, demographically, and that's a pretty exciting thing to, in some ways, jump into a city that's in the midst of that transition."

Under Mr. Jost's leadership, HoMA introduced a $25 annual membership for individuals that helped boost membership to a record of more than 13,000. Its budget in 2014 was about $13-million (U.S.). The AGO has slightly more than 100,000 members, with a $45 student membership and a $110 individual membership. Its annual budget is about $60-million (Canadian).

Born in Michigan to Swiss parents, Mr. Jost, 47, previously served as director of the Shelburne Museum in Vermont and of the Mills College Art Museum in Oakland, Calif., as well as in a number of curatorial positions at the Allen Memorial Art Museum of Oberlin College in Ohio. Ten years ago, he married Will Scott, a Toronto-born academic with a PhD in history, in Toronto. They have a five-year-old daughter, Monique, whom Mr. Jost said would become "the Eloise of the museum."

He cited the 2013 Ai Weiwei show, last year's Picturing the Americas painting exhibition and the recent AIMIA Photography Prize show at the AGO as some of his recent favourites.

Mr. Jost acknowledged that some quarters of the Canadian cultural community will not be cheered by news of an American taking over one of the country's largest museums, especially one built on a strong collection of Canadian art.

"I've got a lot to learn," he said. "I know there are real [cultural] differences, and some of those differences are deep, world-view differences. I'm going to have to depend on my staff to help translate."

Still, he noted that, as a transplant to Honolulu five years ago, he faced similar challenges. "When you go to Hawaii, there are some pretty huge cultural differences there, too. So a little bit of humility goes a long way."

Hiring a Canadian "was a priority," Maxine Granovsky Gluskin, the president of the AGO board of trustees and chair of the board search committee, noted in an interview. "But Stephan was the best candidate, he was head and shoulders above everyone else."

She added: "The art world is so international, and the outlook has to be international. And remember, Toronto is a city that has people from all over the world, and the AGO is, I think, one of the great treasures of Canada. I think Stephan will very quickly embrace everything that's so wonderful about the AGO and about being part of Canadian society."

In an interview, Mr. Teitelbaum praised the choice of Mr. Jost. "The [AGO's] best days are ahead of it. He'll be the guy who can get it to the next level." 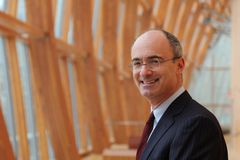