There used to be this widespread, near-mystical belief that to help build a healthy national identity and patriotic fervour in this country you needed to be exposed to a lot of Group of Seven paintings.

Here, the argument went, was an invigorating Canadian art: pure, untainted by foreign influence, wrested raw from the land and sky and delivered directly to canvas and beaverboard by men bearing sturdy Anglo-Saxon surnames like Jackson and Varley. It didn’t matter what your generation was or country of origin or religion. You could be a Vietnamese boat person, a refugee from Biafra, a farmer who first tilled the Saskatchewan soil in 1925. All you had to do was behold Night, Pine Island; or Stormy Weather, Georgian Bay, and voilà! Your Canuck bona fides would get a tune-up even if you’d been around since birth. And if you hadn’t, well, the exposure would get the citizenship alchemy a-burbling for sure. Not only were Group paintings good, they were good for you, the vitamins of nation-building, supplements for the northern soul.

One of the best places for pilgrims to experience the Group fresh and in the flesh, so to speak, was the Art Gallery of Ontario in Toronto. Previously known as the Art Gallery of Toronto, it had acquired paintings by the Group and its progenitor Tom Thomson early and often. Indeed, the Group’s first show was held at what is now the AGO in May, 1920. To this day, the Toronto venue remains one in the trinity of sacred sites of Groupism, the others being the National Gallery of Canada in Ottawa and the McMichael Collection in Kleinburg, Ont. 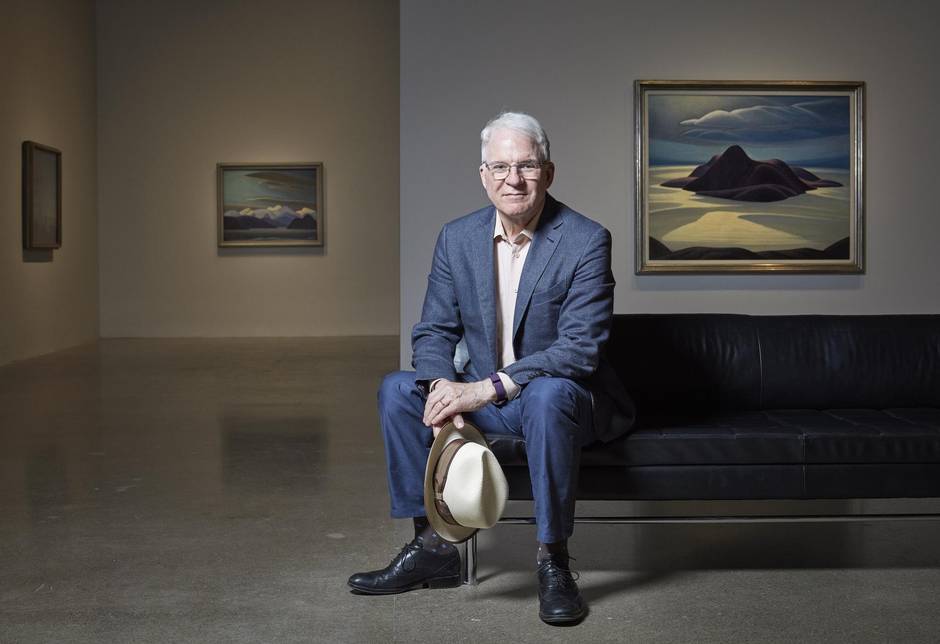 It’s therefore entirely apt that, beginning this weekend, the AGO is hosting an exhibition of selected works by Group founder/éminence grise Lawren Harris that at once celebrates and complicates his legacy and, by extension, that of the Group. Called The Idea of North, it’s a rather peculiar, ungainly beast and all the more interesting for that. As many of you no doubt know, iterations of the show already have played the Hammer Museum in Los Angeles and the Museum of Fine Arts in Boston. This has been courtesy of the power and influence of American actor and writer Steve Martin, a long-time Harris devotee who, deeming Harris a talent deserving wider recognition in the United States, agreed three years ago to serve as lead curator for a touring exhibition.

It’s Martin’s thesis that Harris is less a regional artist than an internationalist, “an important modernist painter of the Americas” who deserves to be spoken of in the same breath as Georgia O’Keeffe, Edward Hopper and Marsden Hartley. And for Martin the work that best embodies this, that most transcends issues of national identity and nation-building, are the richly metaphysical paintings he did of the Rocky Mountains, the shores of Lake Superior and the Arctic between roughly 1921 and 1934. To this end, working with the AGO curator of Canadian art Andrew Hunter and Hammer deputy director Cynthia Burlingham, Martin proceeded to secure 31 top-notch loans, more than 70 per cent of them from the AGO, McMichael and NGC collections.

As a tight-focus introduction of the Harris oeuvre to U.S. audiences, The Idea of North seems to have been a success. Reviews were uniformly respectful and attendance strong. But Andrew Hunter knew what worked in Beantown wouldn’t necessarily work in Hogtown, even with the celebrity imprimatur of Martin and the fact that the loans, in several instances, had never been shown together before. Beloved as Harris is, especially in Toronto, he is – almost a half-century after his death at 85 – very much a known commodity. So Hunter, in consultation with Martin and Burlingham, hit upon the idea of doing an expanded presentation at the AGO, one that would put Martin’s selections at its heart but bracket these with other work – by Harris, by a photographer, by fellow Group member J.E.H. MacDonald, by American contemporaries of Harris like Charles Burchfield and Rockwell Kent and by present-day Toronto artists. 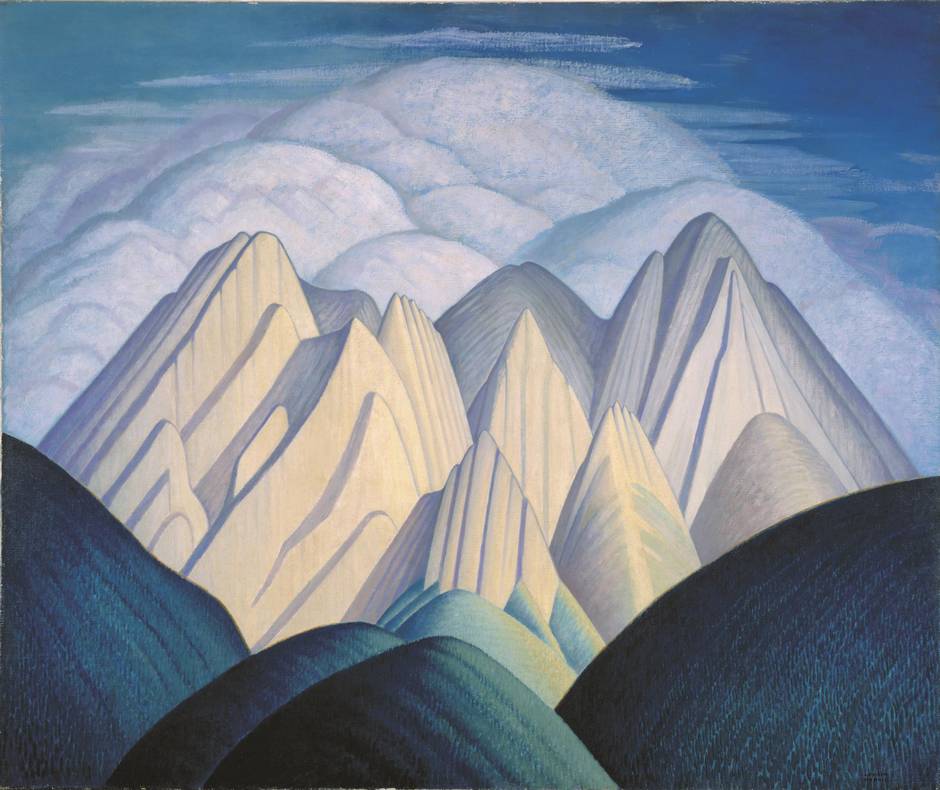 Pace Martin, the plan was to “really situate Harris as a Toronto artist,” says Hunter. Indeed, Hunter’s variation on the theme of The Idea of North argues that Harris’s bold, sculptural depictions of mountains, icebergs and rocks, rendered in icy blues and emerald greens, pristine whites, russets and purples, were “a response to and a rejection of the conditions of the modern city.” In particular, Harris was deeply disturbed by the slum conditions of the Ward, a tightly packed neighbourhood of poor Jews, Chinese, blacks and other Toronto newcomers, located mere minutes away from the Ontario legislature, the University of Toronto – and Harris’s own mansion on Queen’s Park Crescent where he lived with wife Trixie and their three children.

Harris regularly visited the Ward to sketch its rooming houses, factories and shacks, backstreets, warehouses and storefronts, often working the drawings up into paintings. Hunter includes at least 30 Harris building scenes (not all of them are from the Ward; some are from Northern Ontario; Halifax; Hamilton; Glace Bay, N.S.) in his presentation. The overall effect, though, is less one of revulsion, rage or even sadness than something approaching the picturesque, perhaps because Harris includes “no huddled masses yearning to breathe free,” only the occasional human being. The paintings as a result often read more like charming exercises in colour, light and form than social commentary or depictions of “sickly sin in a callow soul” (to quote a [bad] Harris poem from 1922). Much better at conveying the miseries of the Ward are the handful of photographs Hunter has included by Arthur Goss (1881-1940), Toronto’s first official photographer. Much more effective, too, at conveying the vaporous funk and clatter of industrial Toronto is MacDonald’s Tracks and Traffic from 1912.

The human figure is utterly absent in the mountain, Canadian Shield and Arctic paintings that fill the next two rooms. They’re the so-called “core” section of the exhibition, titled The Idealized North, and the ones most directly associated with Steve Martin. Yes, there are two canvases with evidence of human presence, Ice House, Coldwell, Lake Superior (1923) and Eskimo Tent, Pangnirtung, Baffin Island (1930) – but as exceptions they only prove the ruling aesthetic. It’s not that Harris and painter pal A.Y. Jackson didn’t encounter any people when they took the S.S. Beothuk to Baffin Island in 1930. They encountered quite a few, in fact – Inuit mostly – whom Harris duly photographed. But when it came time to paint, he would have none of them. It’s as if Harris’s spiritual quest, his search for ever-more refined, pure and exalted states, could be practised only by erasure, by “an ignoring of the wider social context,” as Hunter puts it. Smartly, Hunter restores the human figure to the scene by including some of Harris’s Arctic photos. 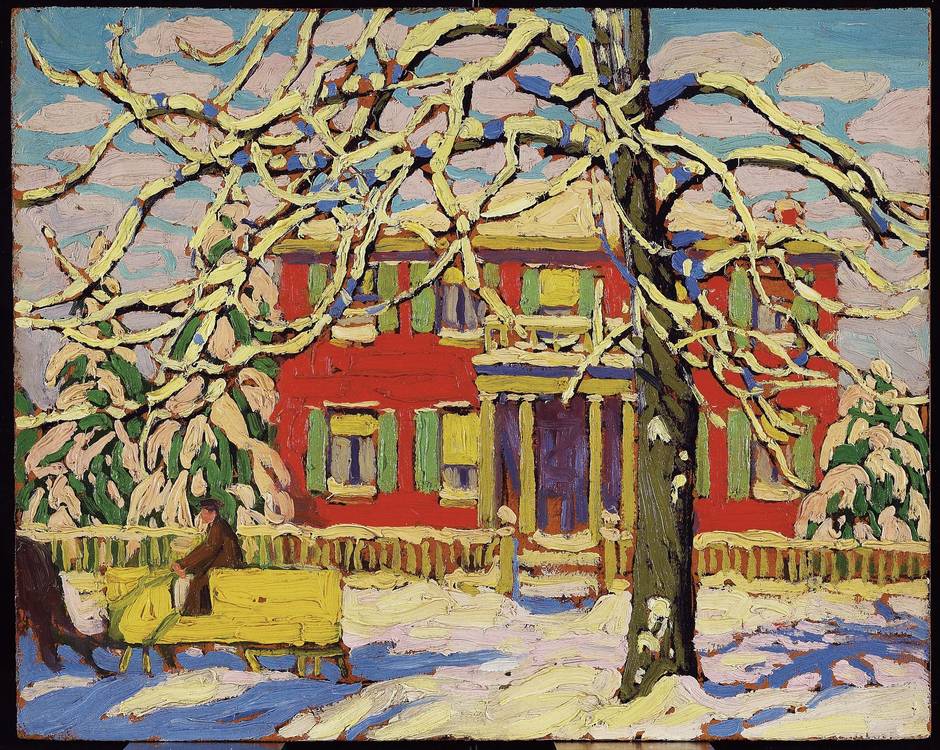 Hunter effects another return in the exhibition’s last section, a return to the Ward – but the Ward of the postwar era when the neighbourhood was largely levelled (erased!) to make way for the construction of the now-famous ultra-modern Toronto City Hall and surrounding plaza designed by Finnish architect Viljo Revell (1910-64). Hunter includes photos of the site being excavated and mounts one of Harris’s strongest abstract paintings, Poise (Composition 4), a 1936 canvas whose clean, fluid, space-age forms seem to represent both spiritual and material renewal in the city while uncannily anticipating the curves and swerves Revell would bring to his design decades later. Of course, there are no humans or even humanoid shapes. And, of course, it’s entirely a work of the imagination as Harris had forsaken Toronto in 1930 in the wake of a messy divorce, never to return to live here.

Believing that “historical art needs to be appreciated from a contemporary perspective,” Hunter commissioned four Toronto artists to do original work for The Idea of North. The individual results are all intriguing – and not one of the projects is a painting.

Anique Jordan, who is African-Caribbean, presents two photo-based colour works, 94 Chestnut at the Crossroads and Mas’ at 94 Chestnut, both dealing with a key black institution, the British Methodist Episcopal Church, that Harris never seems to have gotten around to recording in his strolls through the Ward. Ice Forms, American Falls, Niagara by Jennifer Baichwal and Nick de Pencier is just that: a hypnotic looped video still of the mighty cataract. Dante’s The Divine Comedy informs the last two projects. The Observer, by graphic novelist Nina Bunjevac, consists of three large laminated illustrated allegories, one of a homeless man sleeping underground at the Dundas subway stop (the eastern border of what used to be the Ward), another of shoppers ascending a staircase à la Oscar Schlemmer’s Bauhaus Stairway and the last of skaters on the rink outside Toronto City Hall. Seven Sermons of the Dead: A Guide to Lawren Harris’s Dream, by the Tin Can Forest collective (Pat Shewchuk and Marek Colek), is a witty sequence of images and mystical iconography contrasting the purgatory of the Ward with the paradisiacal sublime of the imaginary North. 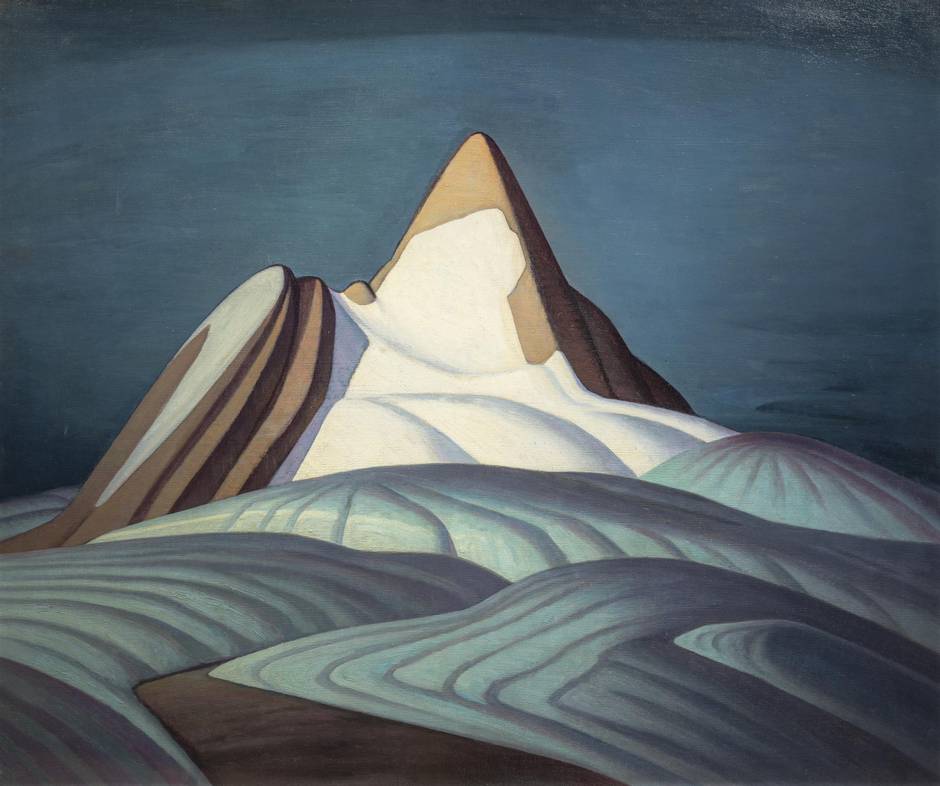 Will The Idea of North make you a better Canadian, or stir you to an even greater investment in true patriot love? Probably not. What it does, instead, is offer a complex and sophisticated reintroduction to Harris, bringing the man, his art and the movement he founded into a more 21st-century framework with all the messiness that entails.