A batch of out-there public art projects recently announced in Vancouver poses an exciting threat to the ocean-and-mountains supremacy. These projects, such as a soaring mesh sculpture that passersby can program, illustrate public art's power to not only animate urban spaces, but to harness the latent energy of a city, and bring people together in a new way. Marsha Lederman gives us this view from the West. 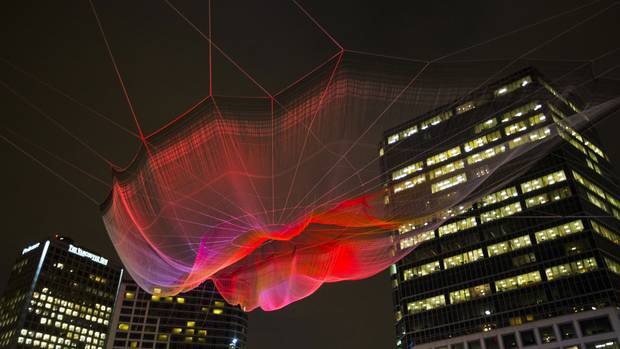 Sculpture by Janet Echelman, interactive art by Aaron Koblin
Commissioned to create a work for TED’s 30th anniversary, public-art veteran Janet Echelman “wanted to use this opportunity to push the envelope in terms of the idea of what art can be in a city,” she says. Inspired by the textile canopy which once hung over Rome’s Colosseum, she has created an enormous work: a 745-foot aerial sculpture made of fishing-net-type fibre, suspended between a waterfront hotel and the convention centre – which transforms into a canvas at night. Aaron Koblin, whom Echelman met at TED three years ago, has created a social element designed to illuminate the sculpture – and spark interaction. Hundreds of people will be able to simultaneously connect with the sculpture with their smartphones, and, using physical gestures, virtually paint it, the results projected onto the 3,500-pound mesh “screen” by five projectors “stitched together,” says Koblin, and driven by an underground server. The work will be unveiled Saturday night, and will remain in Vancouver through the TED Conference until next weekend. It will eventually travel to other cities. 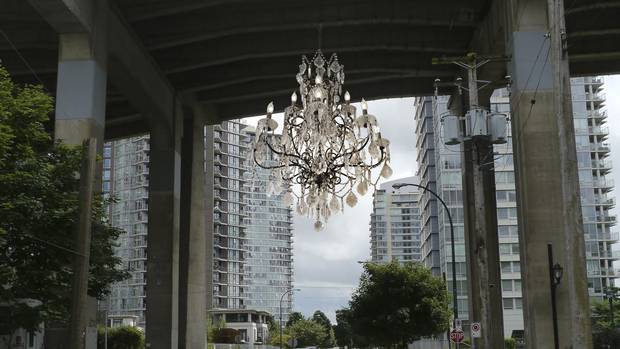 Rodney Graham
This proposed work by celebrated local artist Rodney Graham would see a giant, faux-crystal spinning chandelier installed under the Granville Street Bridge. “I struggled with the idea of how to deal with that space,” Graham explains. “There’s really nothing you can do about the rather harsh context except propose a rather extreme contrast.” Here, he revisits his 2005 film Torqued Chandelier Release, where he used a high-speed 35-mm camera on its side to shoot his 19th-century French chandelier being wound up and released. The bridge-deck chandelier will look like Graham’s – a replica about five metres high that will slowly rotate as it ascends. Then once a day, it will release and spin rapidly, descending back to its starting point. The project has been approved by the city’s Public Art Committee, and the hope is for a late-2015/early-2016 installation, with much still to be worked out. “There will be lots of people that need to weigh in on this in terms of safety, maintenance and unknown issues,” says Reid Shier, the public-art consultant for the developer that is proposing the project (and also director/curator of Presentation House Gallery). “Certainly no one’s ever hung a chandelier under a bridge.” 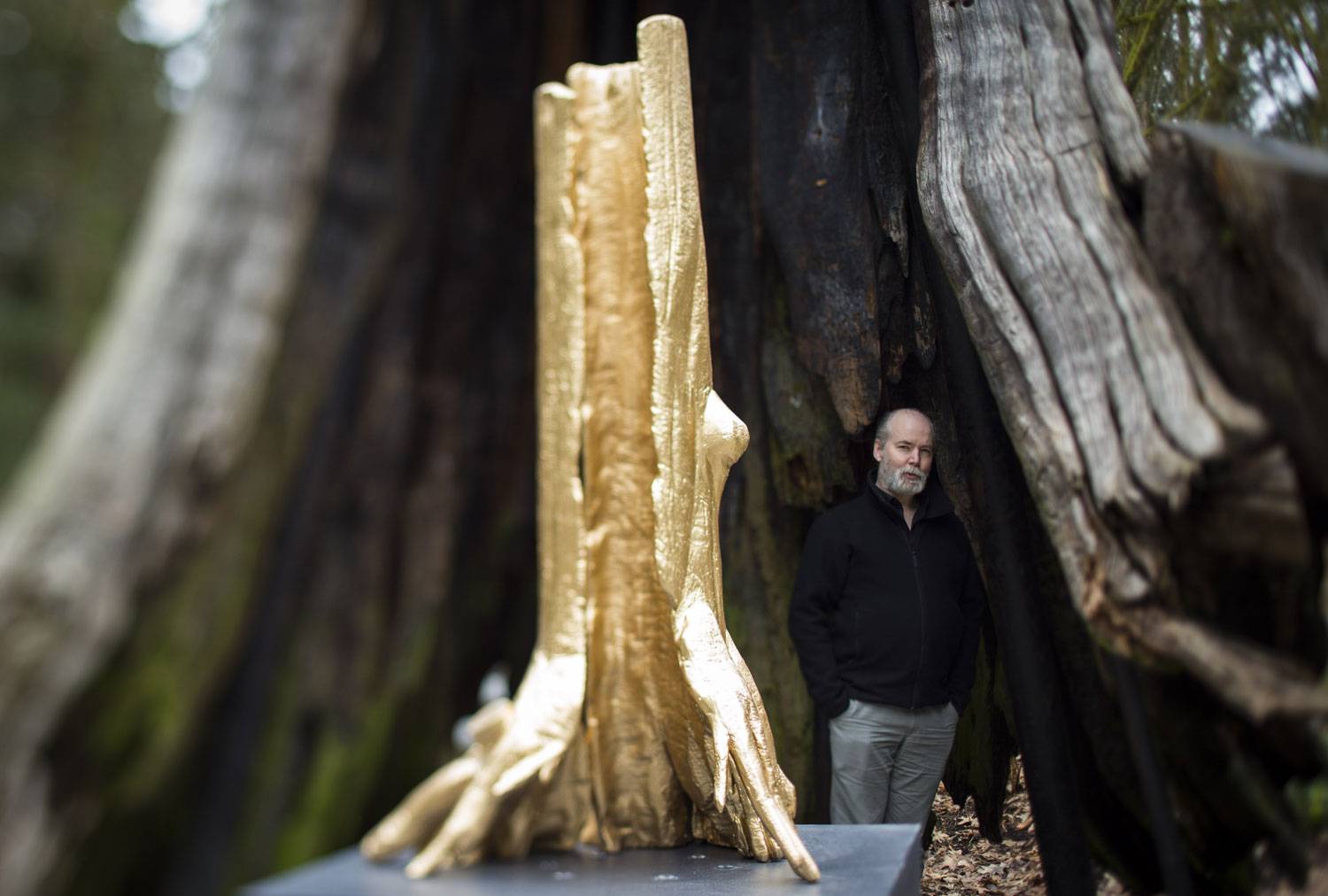 Douglas Coupland
Stanley Park’s Hollow Tree is a beloved icon which has lent itself to countless tourist photographs. Douglas Coupland, who has his own strange connection with the tree (in 1995 his stolen Volkswagen was found in it, the thieves still inside, drunk), is creating a mirror-image representation, exactly to scale at 43 feet – a golden tree set in front of a 25-by-40-foot image depicting Stanley Park. To be installed next year in South Vancouver in clear view of Canada Line transit passengers, the work will serve as a new southern gateway landmark, Coupland says. In his artist’s statement, he notes that the tree is falling apart, and Vancouver is changing, too – its population migrating to new neighbourhoods. So he dreamed up a new tree to help animate a neighbourhood he once found dull, “as though the real tree had been teleported across the city to compensate for the city’s new centre of gravity. In the process it became a mirror image of itself and it became gilded in gold.” 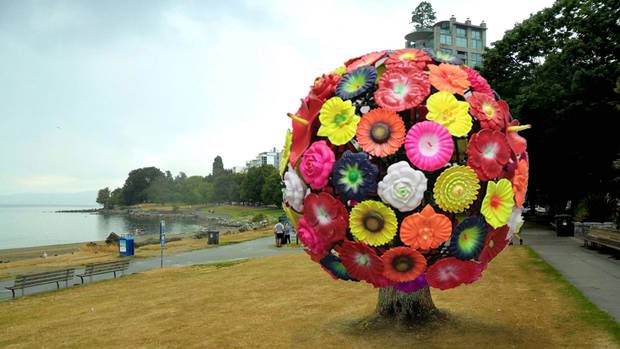 Choi Jeong Hwa
The Vancouver Biennale installs public art around the Lower Mainland for a two-year period, but some pieces remain permanently, such as the popular A-maze-ing Laughter (purchased for the city thanks to artist Yue Minjun, who dropped his price, and Lululemon billionaires Chip and Shannon Wilson, who paid for it). The third edition of the Biennale, just gearing up, will involve 16 curators and 92 artists – among them Ai Weiwei, with a yet to be revealed work. Choi Jeong Hwa’s Flower Tree, planned for English Bay not too far from A-maze-ing Laughter, could create some stiff competition in the neighbourhood in terms of wow factor and public engagement when it’s installed this summer. The South Korean artist, well-known for his oversized, colourful sculptures, will create an 18-foot, multicoloured metal and plastic tree to live on the waterfront near real trees. “He’s playing with materials and creating something we’re familiar with, but looking at it in a different way,” says Biennale founder and president Barrie Mowatt. “He’s pushing boundaries. Vancouver’s a safe place to do that.”
Follow Marsha Lederman on Twitter @marshalederman
Report an error Editorial code of conduct
Due to technical reasons, we have temporarily removed commenting from our articles. We hope to have this fixed soon. Thank you for your patience. If you are looking to give feedback on our new site, please send it along to feedback@globeandmail.com. If you want to write a letter to the editor, please forward to letters@globeandmail.com.
Comments