The eight illuminated brain scans glowing outside Vancouver's Contemporary Art Gallery speak to Jeremy Shaw's fascination with the organ and its altered states. One of his art brains is healthy, six display the cumulative effects of substance abuse – from alcohol to crystal meth – and the most disturbing one appears to be partly eaten away, stricken with dementia. Degenerative Imaging (In The Dark) (2015) was inspired by those light-activated, glow-in-the-dark vinyl star and planet stickers that have dotted many a childhood bedroom. Shaw, 37, was one of those kids who had those stickers, but he developed a particular affinity for them during acid trips in his teenage years in North Vancouver.

The work's source material comes from 3-D SPECT scan renderings of blood flow and metabolic activity in various brains. Shaw isn't convinced of their scientific validity ("it's a little dodgy," he says), but he loves the questions they pose, such as: if some sort of vision (of, say, God) is achieved during an altered state, but can be explained away with science, is the experience any less valid?

Beyond all the multilayers, the vinyl cut-outs – charged by fluorescent light – are also aesthetically interesting to encounter as you approach the gallery – or walk by on the sidewalk.

"I'm a pop artist at the end of the day," Shaw said in Vancouver last week. "I want it to resonate on impact."

The this-is-your-brain-on-whatever series in the outdoor vitrines makes for a good prologue to Shaw's show Medium-Based Time, which has just opened at the CAG in Vancouver, with two works – one video, one film – that take your brain to trippy places.

Shaw, whose work tends to examine altered states and transcendental experience, is a North Van boy and Emily Carr graduate now living in Berlin, and receiving international attention. He has had solo shows at institutions such as London's Serpentine Gallery, MoMA PS1 in New York and the Museum of Contemporary Canadian Art (MOCCA) in Toronto. Variation FQ (2011-2013), one of the works in this show, premiered at Berlin's prestigious Schinkel Pavilion and has been acquired by MoMA and the National Gallery of Canada.

Variation (referring to a solo performance) FQ (for femme queen) features legendary transgender voguer Leiomy Maldonado dancing in a white bodysuit against a black background – making it appear as if she were in a void; an elegant, poised jewellery-box dancer but with all kinds of athleticism and sass. The installation was inspired by Canadian filmmaker Norman McLaren's groundbreaking 1968 film Pas de Deux, which Shaw saw as a kid at elementary school. The step-and-repeat effect haunted Shaw for a long time – and when he started taking acid as a teenager, the psychedelic drug-induced tracers, as he calls them, reminded him of the film's optical effect.

The advent of YouTube meant Shaw could have access to the short and watch it again and again. YouTube was also where Shaw was introduced to Maldonado's vogueing, and he sought her out while he was living in New York on a Canada Council residency. (Before Madonna took it mainstream, vogueing – with its model-like posing and ballroom battles – was a New York subculture, and Shaw is fascinated with subcultures, as well as altered states.)

In Shaw's film, Maldonado's performance is captivating; the dramatic fluidity of her twirls and kicks set not to house music but – surprise – a classical score, written by Shaw (who is also a musician, known as Circlesquare). At times she could be swimming, skating. A few minutes into the piece, as she frees her hair, chopped-up vocals from Willow Smith's dance-pop hit Whip My Hair quietly join the piano and strings, and as she continues to twist and teeter, the electronic music becomes more pronounced. (Maldonado, not incidentally, appears in the video for Whip My Hair.) The work is presented in a black curtained space, heightening the feeling of the dancer in suspension.

At the other end of the CAG, Shaw's pseudo-documentary Quickeners is a trip into the past and future. He has reworked footage from the 1967 documentary Holy Ghost People about a West Virginian Pentecostal Christian community that, taking a passage in the Gospel of Mark literally, includes snake-handling in its worship practices to show devotion to God. The black-and-white 16 mm footage depicts the believers in various states of faith-induced trance – dancing, singing, convulsing.

From this, Shaw has created a new science-fiction tale, set 500 years in the future, about a small group of people afflicted with Human Atavism Syndrome, a disorder which makes these Quantum Humans desire and feel as their evolutionary predecessors – human beings – once did. Shaw has altered the dialogue in the source documentary footage so that the sound-edited words the faithful utter are unrecognizable – like a futuristic speaking in tongues – and he has added subtitles so we can understand the words. Stilted, old-time BBC-sounding EQ'd narration guides us through the story. At about 25 minutes in, the 36-minute long video transforms into a signature Shaw work with a hypnotic, trance-like climax. To a building techno soundtrack, the black-and-white footage is altered so the dancers are slowed down and at times individually awash in an almost-coloured kind of light – as if they are feeling the glow of God. It's mesmerizing, watching the mesmerized. Even as I recoiled from the snake shots (I have a problem with snakes) – especially one where a rattlesnake was tossed into the air – I had trouble taking my eyes off this aggressive, disconcerting work.

Finally, there is the denouement, where exhausted (or in one case, snake-bitten) believers slump over, wipe themselves down, and put the snakes away until next time.

After Quickeners (co-produced by CAG and having its North American premiere) fades to black, it seems inevitable that the Quantum Humans will be doomed outside this church-like basement; their future in the real world, circa 2516, murky. Meanwhile as the viewer, you leave the gallery feeling unsettled – in some sort of altered state. Just as Shaw would have it. 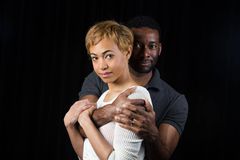 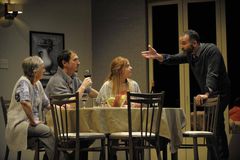