Have I stayed long enough? Have I paid enough attention? Was I moved? What am I feeling? Did I like it? And if I haven’t liked it, is it still good?

These are the sorts of questions that can occupy my mind after seeing an exhibition in an art gallery. I’m sure I’m not alone in asking them. But every now and then, such questions seem weightier than usual, more involved, the answers and discriminations they’re seeking a kind of test, in fact, of one’s conscience and principles. Paradoxically, there also are times when such questions seem too light, inadequate, wrong even, for the sussing out and shaping of what one has seen. 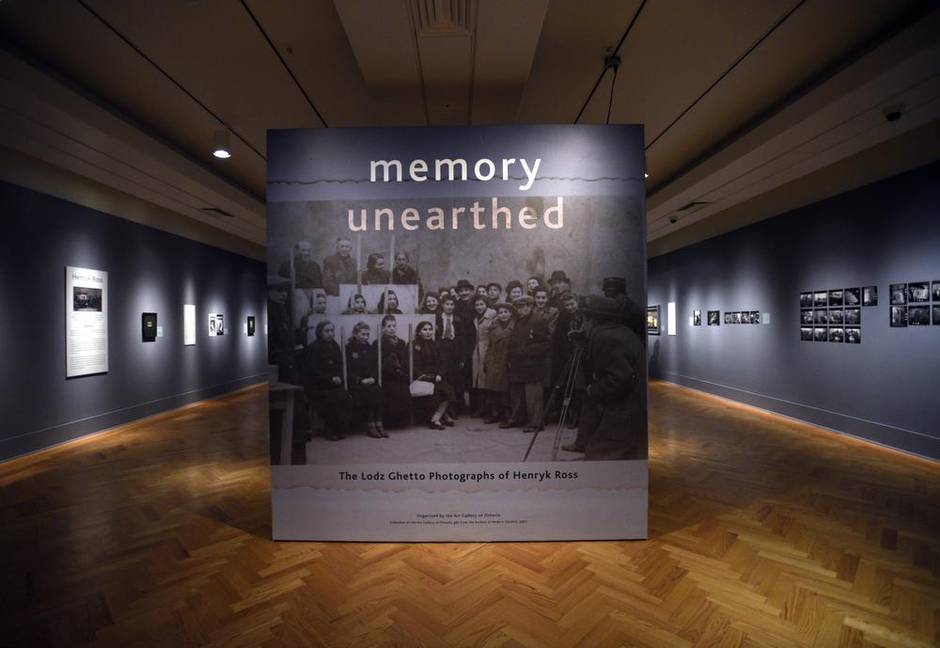 I had all these sensations the other day while taking in Memory Unearthed: The Lodz Ghetto Photographs of Henryk Ross, a recently opened show at the Art Gallery of Ontario in Toronto. It’s a sombre, sobering, complicated affair, all grey walls and subdued lighting and, really, how could it be otherwise? We’re talking, in the main, about 200 or so small-to-medium-sized black-and-white images shot, between spring, 1940, and summer, 1944, of Polish Jews (mostly), the overwhelming majority of whom you just know died – and died horrifically – four hours or four days or four months or four years after Henryk Rozencwajg-Ross clicked the shutter of his Leica.

Ross was one of the more than 160,000 Jews rounded up by the conquering Nazis in mid-1940 for incarceration behind barbed wire in a 2.4-square-kilometre area (some sources have put it at four square kilometres) in central Lodz (pronounced “Woodzh” in Polish). By this time, the city had been renamed Litzmannstadt, after a First World War German general, and incorporated into Nazi Germany as a municipality of the new province of Warthegau. Born in Warsaw in 1910, Ross was a highly regarded photographer (he was especially adept, apparently, at sports photography) and graphic artist.

Ross was tasked with producing passport-sized photos for inmate identity cards, documenting official meetings, chronicling the activities of the 100 ghetto factories that serviced the Nazi war machine and taking pictures of Judenrat police, firemen, nurses, teachers and administrators, including the controversial Judenrat chair Mordechai Chaim Rumkowski. Rumkowski’s motto was “Our way is work!” – in effect, a wager that if the Jews of the former Lodz laboured hard enough, productively enough, efficiently enough, cheaply enough, their German masters would come to value them as indispensable rather than so much fodder for the death camps of Chelmno and Auschwitz. The gamble didn’t pay off, of course. By the time the Red Army liberated Lodz in early 1945, fewer than 900 Jews were still alive; the rest had been starved, felled by typhus, beaten, hanged, shot or gassed. At its height, though, the Judenrat oversaw some 10,000 employees, Ross among them, whose semi-elite status in the ghetto afforded them roomier accommodations (comparatively speaking) as well as better food, more mobility and therefore greater purchase on the delusion that they might just survive. Ross, in fact, did survive, immigrating in 1956, with the wife he had married in Lodz in 1941, to Israel where he testified at the famous trial of Adolf Eichmann in 1961. Ross died in Tel Aviv in 1991.

Also surviving: an estimated 3,000 negatives from Ross’s Lodz “diary,” plus some photographic prints and ghetto ephemera. It’s this material, donated to the AGO almost eight years ago by the London-based Archive of Modern Conflict, from which the gallery’s special photographic projects curator Maia-Mari Sutnik has assembled Memory Unearthed, likely the most comprehensive solo showcase ever of Ross’s complex oeuvre. (France’s Museum of Resistance and Deportation hosted a Ross solo exhibition called The unburied Photos of Lodz in 2011; the Nazi Documentation Centre in Cologne, Germany, also hosted a similar show that year.) 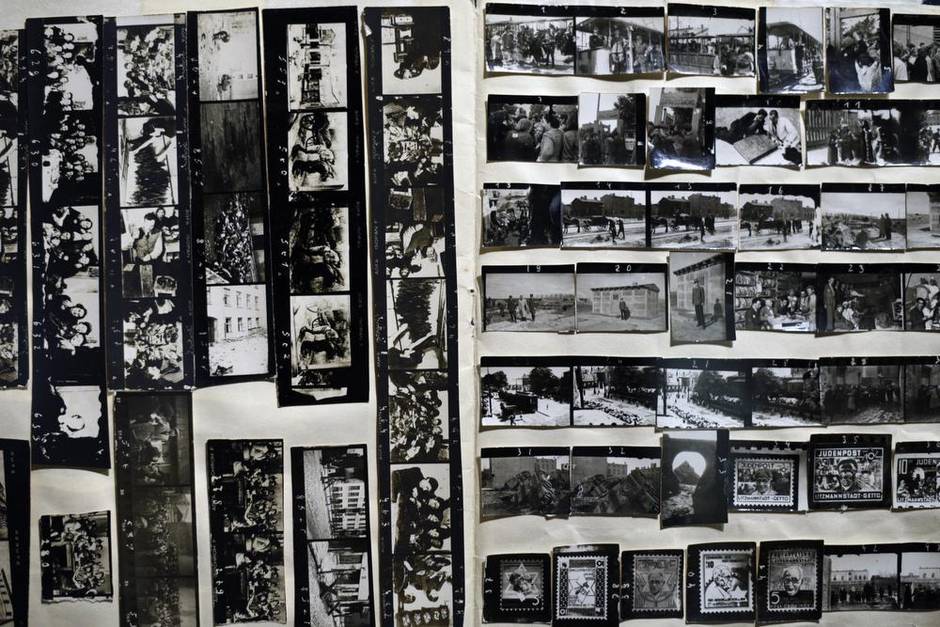 Its evocative title is no flight of poetic fancy: The works were literally taken from the earth. In August, 1944, as the Germans readied the mass deportation and liquidation of the remaining Jews of Lodz, Ross loaded his negatives into sealed iron canisters and, along with the ephemera and prints, stored them in a tar-lined wooden box. The box then was buried in the hope that at some future date someone somehow would exhume its contents and thus learn the fate of European Jewry in general and the Lodz community in particular.

Amazingly, it was Ross himself who got to excavate the box, in March, 1945. He’d avoided the last train to Auschwitz by being assigned to one of the clean-up squads the Nazis had organized to scour the ghetto for whatever valuables remained and to ready the buildings for occupation by German nationals fleeing the Red Army. Alas, the exhumation revealed that at least half of the 6,000 buried negatives, on unstable cellulose nitrate stock, had been entirely blackened by moisture, while many others were in various degrees of deterioration. Still, Ross kept what was intact, more or less, and three years after the Eichmann trial, he printed up some negatives for publication in a book, The Last Journey of the Jews of Lodz, co-authored with Alexander Klugman.

Almost 25 years later, Ross began to assemble a catalogue list while preparing a 17-page “folio” of several hundred numbered contact prints. This was onerous work for an ailing man of failing memory in his late 70s, made more onerous by the fact that, especially with respect to his Judenrat pictures, Ross rarely dated the work, identified his subjects or substantively captioned what he had shot.

Unsurprisingly, when he died at 81, the project was not yet finished. It wasn’t until 2004, with the publication, by the Archive of Modern Conflict, of Lodz Ghetto Album: Photographs by Henryk Ross, that the full range of his output began to gain public awareness. (The archive had purchased the Ross legacy from Ross’s son in 1997. Since acquiring the collection in 2007, the AGO has digitized the 3,000 negatives.)

It’s this full range that’s one of the “problematics” of Memory Unearthed or, more precisely, Ross’s pictures. If you’re looking for images of malnourished children, anxious faces and executions, of corpses in the morgue and men and women festooned with Stars of David being herded toward boxcars, they’re here. Ross was simply too much the professional photographer/recording witness to stick strictly to his official, propagandistic duties, even as this curiosity might have put him in death’s way. This reportorial, cover-all-the-angles instinct is perhaps best demonstrated in a series of pictures taken of mass deportations in mid-1944. What’s amazing is the variety of points of view. One minute Ross is at ground level, shooting people up close, as crowds and in smaller groups; the next, he’s snapping away from what seems to be the second-storey window of a deserted building; the next, walking in lockstep with the doomed deportees. 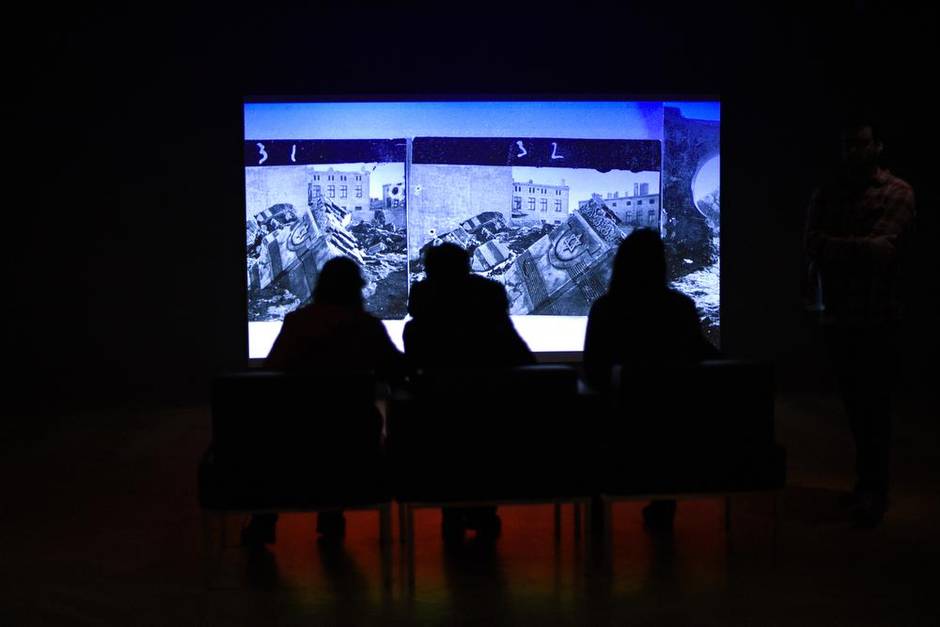 Yet as powerful as this stuff is, it fits very much within what could be called “conventional Holocaust photography” – a term that makes me cringe even as I write it since it suggests a hierarchy of values, a privileging of one kind of a photography over another, the reduction of the emblems of something as soul-searing and near-ineffable as the Holocaust to the level of chatter that fashion-magazine art directors might engage in when comparing a Richard Avedon depiction of haute couture to that of an Irving Penn.

This aestheticizing impulse is, of course, one of the hazards of the art-gallery experience. It’s hard not to pick favourites, to tuck even the toughest content into the bed of beauty. So, yes, I’m more partial to some images in Memory Unearthed than others. One, of two children seeing their mother off to her doom, hands clutching the wire fence that separates them, is superbly composed (a feat most noticeable in the full-negative, full-page print published in the exhibition’s excellent catalogue) and excruciatingly poignant. Death, you know, will be reuniting them soon enough. Its near-equal is a shot of several elderly and sick persons, including a wincing, beseeching woman, piled into the back of a horse-drawn cart. Both, in short, are what we’d call good photographs. Yet because each is dealing with a real death-in-life moment, likely captured at great risk (as opposed to being, say, a still from the set of Life Is Beautiful), it’s difficult not to feel bad “celebrating” this image or that over another just as real and harrowing but, finally, not as artful.

What really confounds in Memory Unearthed, however, are what might be called Ross’s “happy pictures.” Pictures of smiling, courting couples, mugging policemen and children’s parties, of family gatherings, well-stocked stores, flourishing gardens, healthy babies or a lively theatrical performance. Shot, it seems, mostly before 1942, when Ross was explicitly told to cease taking non-official photos (and when Rumkowski, on Sept. 9, called on ghetto parents to give up all children under the age of 10 for “resettlement,” as well as the ill and elderly), these images would be entirely at home in an album of “normal” family snaps. But here, being so much at odds with our expectations and notions of what constitute ghetto and Holocaust photography, they’re something of a shock.

Of course, as Sutnik notes in the catalogue, “photographs are ambiguous,” their contents open to myriad interpretations. For all their seeming happiness, the 1940-42 images depict, finally, “experiences that only Ross can claim” – and he’s dead. Thus, a suite of four photographs of a mother, baby and Judenrat father, a policeman, seems on one inspection to be all tenderness and affection. But on another, as Gillian McIntyre, interpretive planner for the AGO show, observes, it may be “a scene of fearful anticipation.” Maybe the baby is ill? Maybe a drastic parting is about to occur? Is the affection being shown “a moment of adoration – or consolation?” Near the show’s conclusion, there’s a wall of 90 or so portraits of individuals, couples and groups, many of them smiling and clearly posed. For McIntyre, this is “an example of how photography can be consoling experience amid horror and uncertainties,” the poses an attempt to “present a dignified image of self, summoning hope and self-worth,” the smiles almost the go-to reflex when faced with getting your picture taken. To these eyes, they’re a demonstration of Henryk Ross as the compleat photographer whose training, predilection and sense of craft all but compelled him to render as complete a depiction of life as he could, even the constrained ghetto life.

Being the all-seeing I, though, has its costs, it seems. At the exhibition’s start there’s a 13-minute excerpt from the 1979 documentary Memories of the Eichmann Trial featuring an interview with Ross and his wife, Stefania. In its final seconds, we’re told that Ross “never took another photo once he left the ghetto.” While not entirely true – the AGO has photos that Ross took in 1947 of the trial of Hans Biebow, the Nazi overseer of the Lodz ghetto – it’s true enough. Ross never got his mojo back as a photojournalist, nor, as mentioned, did he ever complete the cataloguing and ordering of the material he had shot. Writes Canadian photographer Michael Mitchell in the catalogue: “Photography and the horrors of life [in the ghetto] were inextricably linked in Ross’s mind.” What the camera’s eye had seen offended him and he had to pluck it out. 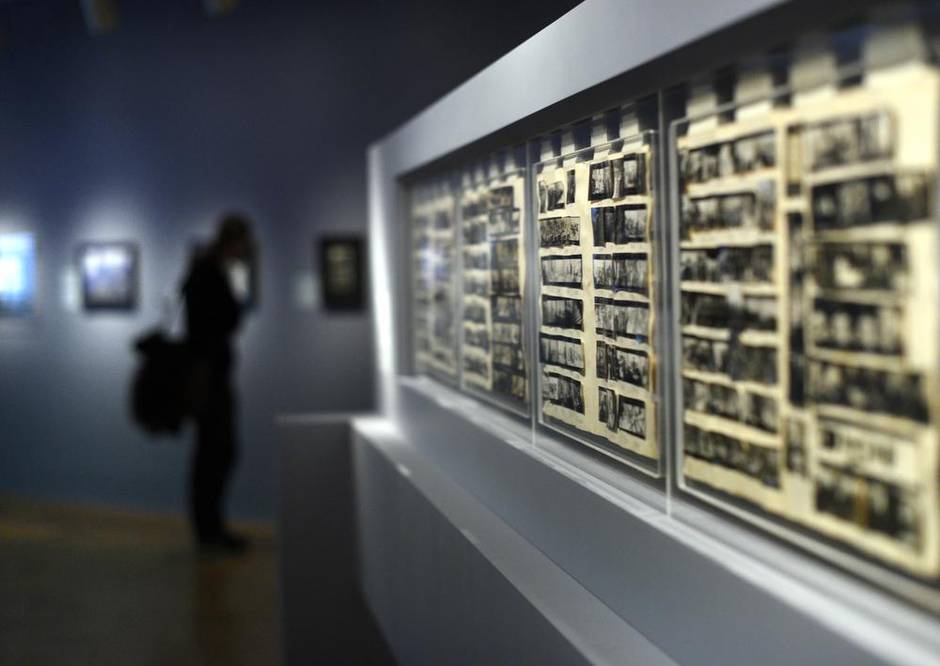