To see it, you have to move. The design showpiece of the new Goh Ballet Academy is a large installation printed on a textured wall in the entry corridor. At first it appears abstract strips of black and colour. But as your body and your eye travel through the corridor, it resolves into two images: one of a corps de ballet, and the other of Chan Hon Goh, performing the role of Juliet, her arms extending backward to take in the entirety of the room.

The gesture is rich with significance. After all, both dance and architecture are concerned with bodies moving through space. The graphic “creates a sense of dynamism,” says architect Andrew Batay-Csorba, “and prepare the students to begin their work.”

We are at the esteemed dance company’s new location in Toronto, which opened in late July in the suburban Bayview Village shopping mall. It seems an unlikely place to find either one of Canada’s most distinguished dancers — Goh herself — or one of its most interesting young architecture firms, Batay-Csorba Architects. But here they are.

Goh, the former National Ballet of Canada principal dancer who directs the company, describes a mix of poetic and pragmatic concerns for the new facility. “Dance has very specific technical requirements,” she says, “but we also wanted this to be a refuge, a place where you can get away from the world and focus on the work.”

The three studios are straightforward. From the entryway with the graphic installation, you ascend a long ramp that gets you up to the higher floor level where dance happens, on a specialized vinyl surface and a sprung floor nearly a metre thick.

The walls in the studios are largely mirrored, so that dancers — as young as five — can see their own form. The ceilings have been opened up, with clear heights of five metres. Each of the spaces feels “light and airy,” as Goh says, but the height also has a specific purpose: “When we have adult dancers here, we need that height in order that they can do proper lifts.” Every bit of the volume, from floor to ceiling, is ready for the human body to pass through it.

The architecture is stripped back, the space planning extremely efficient. A central anteroom connects the three studios, its carpeted floor and ceiling clad in a subtle shade of pink. Terrazzo tile and clear sans-serif typography complete the palette. It’s tasteful, and simple.

Which makes sense: Generally, ballet studios are not fancy places. “Ballet studios, outside those of the major companies, are incredibly raw,” Batay-Csorba says. (He cites Diller Scofidio + Renfro’s 2007 work for the School of American Ballet in New York, which is indeed very spare.)

Goh concurs: “Dance is not about luxury,” she says. “It is about the work, and what is done in the studio.” Indeed she points out that her parents Choo Chiat Goh and Lin Yee Goh founded the company in 1978 in a basement, where “they made do.” Goh began training with them at nine, and after winding up her career as a distinguished performer she took over as director in 2010. The company’s Vancouver home is a neoclassical former bank branch that, Goh says, connects with the intellectual roots of classical ballet.

And yet the company has done something different here, with Goh’s current business partner, real estate developer Ian Gillespie of Westbank. They’ve hired BCA, The young firm, run by Jodi Batay-Csorba and Andrew Batay-Csorba, is quickly making its name among Canada’s most ambitious young architects.

Here, they’ve delivered a set of spaces that are tightly detailed, and finely built by construction managers Boszko and Verity. But since the studio spaces are so utilitarian, where’s the art? “There are always different ways of tackling an architectural problem,” says Andrew Batay-Csorba, “depending on which questions you ask.”

Which brings us back to those graphics. “The intersection of graphic design with architecture is not well explored,” the architect says. “There are ways you can use graphics to create interesting spatial environments.” The double image is what’s known as a lenticular, a concept most often used in children’s toys and souvenirs. The two photographs are printed mostly on a flat wall in alternating stripes. But specific sections are three-dimensional, with a zigzagging panel that protrudes from the wall. In this way the different images reveal themselves to different degrees depending on where you stand. “It’s a space of circulation, a space of movement,” Batay-Csorba says.

It is, and it suggests how one design decision, like a single gesture, can engage both the body and the mind.

Editor’s note: An earlier version of this article included an incorrect spelling of Chan Hon Goh’s name. Also, she took over the Academy in 2010, not 2005 as originally published. 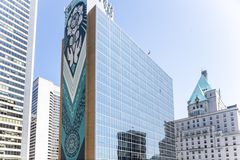 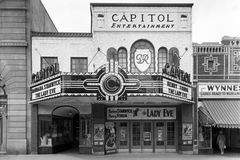 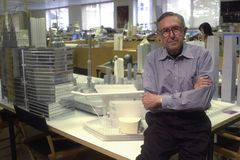