Standing in a gallery full of her astoundingly realistic pencil drawings featuring nothing but the rippling waters of the Pacific Ocean, the American artist Vija Celmins announces: “There is no ocean here.”

The New York artist, now 80, created her ocean series from photographs of the sea when she was living in Venice, Calif., in the 1960s. And her point is that these painstaking drawings, currently showing the Art Gallery of Ontario, were never intended to represent the water. Indeed, she quickly corrects a curator who unthinkingly uses the word “representation.” So, if they are not intended as seascapes, what are these drawings “about”? Celmins’s interest, whether in the ocean drawings or equally magnificent renditions of the moon’s face and the desert’s floor, lies in the surface of the art. Stripping her work of symbolism, she has spent decades interrogating two-dimensionality just as surely as the towering male abstractionists who she followed in her youth made theirs a quest for flatness.

This major retrospective, organized by the San Francisco Museum of Modern Art and New York’s Metropolitan Museum of Art, begins back in those days when she first stopped aping abstraction and started to look around her.

“I was floundering around, trying to do these big abstract paintings, like all of us were,” she said at a media preview of the exhibition, adding as an aside: “All my heroes were men."

“I got back to just looking at things and painting,” she continued. “I started dealing with an image and a two-dimensional plane.”

The result was a series of paintings that feature the objects in her studio – a hot plate, a letter, a lamp – at actual scale in muted colours on neutral backgrounds.

When Celmins painted a television set, she ushered in the next phases of her work with the image of an exploding airplane on its screen: Now she was painting photographs.

Indeed, if you stand in the gallery full of untitled ocean drawings, from a distance you might think you were just looking at black-and-white photographs of the water’s surface. It is only up close that you begin to see the artist’s remarkable handiwork rendering the ripples and refractions with her pencil.

In a few instances, annoyed that viewers still insisted these were to be admired as pictures of the sea, she very faintly etched an X through the middle of the image. This show also includes two images of clouds, but you can guess why Celmins did not stick with them as a subject: Those fluffy heavenly shapes are just too easily burdened with meaning.

She turned instead to photographs of the night sky, creating drawings in which layer after layer of graphite pencil was built up to render the darkness until it reached a point where the paper could hold no more: After almost two decades of only working in pencil, Celmins took up her paintbrush again in the 1980s, and developed even more technically demanding methods of layering and sanding paint to render images of the sky based on photographs in textbooks.

In none of this work does she invite the viewer through a frame into an illusionary three-dimensional space – in the late nineties, she picked spiderwebs as a subject for a series of charcoal drawings specifically because they provided a flat grid – and yet her technical mastery of the painted or drawn surface does create a remarkable illusion of reality.

That’s a paradox she explored in a central piece called To Fix the Image in Memory (1977-82), the work that gives this show its title. It features two sets of apparently identical stones – 11 stones that she found in New Mexico and 11 cast-bronze copies that she painted to ape the real ones. The work is initially destabilizing: It takes a moment to sort out what one is looking at and realize that nature couldn’t possibly produce two identical stones, let alone 22. With long and determined viewing you should eventually be able to pick out the odd brush stroke – or glint of actual mica – and so tell the real from the copy.

In more recent work, Celmins, with the help of a collaborator, has created apparently identical pairs of children’s blackboard tablets, reproducing the battered wooden frames and the scratched slate surfaces with such detail it becomes impossible to tell which is the copy.

Of course, a 19th-century tool for children’s learning is not without rich emotional content. Each pair of tablets evokes memory, history and loss: Think of all those layers of sums and letters now erased before you ponder the puzzling difference between the remnants of real erasures and the remnants that are only a copy. So, Celmins’s art is not merely formal, not without some potential for meanings as layered as her paint and her graphite.

When she first turned to painting photographs in the late sixties, her initial subjects were Second World War planes, as she began to obliquely recall the noise, dirt and fear of her youth as a refugee fleeing her native Latvia – just as her adopted country plunged into the morass of the Vietnam War. Similarly, her moonscapes today recall that moment in the sixties when images of the moon’s surface first entered the public consciousness.

And yet, if they evoke a historical memory, they also demand you stare long, hard and close at their detailed surfaces, questioning what you see and the remarkable craft that created it. Celmins’s art is the art of looking.

Vija Celmins: To Fix the Image in Memory continues to Aug. 5 at the Art Gallery of Ontario. 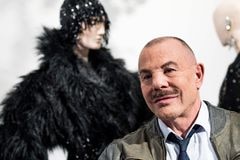