It is a dream job, at a nightmarish time. Anthony Kiendl officially began his new position as director of the Vancouver Art Gallery Friday morning.

“This is one of Canada’s and the world’s great art galleries, and I’ve been working towards this kind of role on this scale my entire career,” he said in a telephone interview earlier in the week, still surrounded by boxes in his new Gastown apartment.

Kiendl comes to Vancouver from the MacKenzie Art Gallery in Regina, where he was executive director and CEO.

He takes over in the midst of the pandemic – with its devastating impact on admissions, and thus revenue. Programming, too, has been affected; it’s impossible to bring in works for exhibitions from abroad.

He has also inherited the VAG’s years-long campaign to build a new gallery – which was already challenging, the pandemic notwithstanding.

The gallery is running a deficit. Morale is low. There have been layoffs and most remaining staff are on a four-day work week. Senior management are also working reduced hours. And there are high-level departures, including that of Ann Webb, associate director, engagement and strategic initiatives, who leaves in September. The chief curator position needs to be permanently filled. And the collective agreement expires next year – after staff went on strike just last year.

During that job action, concerns were raised about the gallery’s leadership – not just by striking staff, but by some donors and artists. That spring, the board did not renew longtime director Kathleen Bartels’ contract. Former chief curator and deputy director Daina Augaitis, who had previously retired from the gallery, agreed to step in on an interim basis. Then, the pandemic hit.

“He’s got a history and a proven track record of being inclusive,” says Calabrigo, on a conference call with Kiendl. “He brings people along with him. He doesn’t direct and push and pull ... He’s collaborative, he talks to his direct reports [and other] people in the gallery. He seeks input before he acts, and then he brings people along together towards a common objective.”

Kiendl, 51, was born on Long Island, N.Y. and moved to Canada when he was three. “I grew up in Winnipeg and I feel and act like a Canadian,” he says.

His first exposure to contemporary art was in Grade 12, visiting Winnipeg’s Plug In gallery, then housed over a luggage shop.

So it was a career highlight when – after four years as director, visual arts at the Banff Centre – he returned to Winnipeg in 2006 to run the Plug In Institute of Contemporary Art – no longer over that store, but still in search of a better venue. He was tasked with building a new facility – and raising the money to accomplish that.

“Everyone said it couldn’t be done; it would never happen,” says Kiendl, noting the 2008 recession and a long list of capital campaigns in the arts in Winnipeg at the time, including fundraising for the yet-to-open Canadian Museum for Human Rights. Four years after he started, the Plug In ICA’s new, purpose-built space, co-owned with the University of Winnipeg, opened next door to the Winnipeg Art Gallery.

“I’m no stranger to adversity and challenges,” he says. “I believe passionately in the Vancouver Art Gallery and this project as much or more than I did in that one. Vancouver is really the centre of the [visual] art scene in Canada and it needs and deserves an iconic location that reflects that.”

This is ambition on a much grander scale: the Plug In’s project budget was $4-million; the VAG’s is nearing $400-million. Still, Kiendl says, “I’m optimistic that we’re going to find a way to do this.”

The pandemic poses challenges on that front, but also an opportunity, Calabrigo says. Governments are looking for shovel-ready infrastructure projects to stimulate the economy – in the construction phase, and beyond. Calabrigo says the new gallery fits the bill.

“Governments have reached out to ask what they could do to support us, going forward, from a financial point of view,” says Calabrigo. “And that was our response: you can come to the table on funding this project.” With funding secured now, he says, construction could begin in fall 2021.

The gallery’s current deficit is “in the ballpark” of $3-million, Calabrigo says. The gallery’s finance and audit committee has been meeting every two weeks to review the budget.

“You can imagine what it’s like to forecast in this environment,” Calabrigo says. “Very, very difficult.” The wage subsidy program, currently due to wrap up late this year, has been a lifeline.

The pandemic has taken a toll beyond the balance sheet.

“The financial impact has impacted our staff and there are reduced hours of work and I feel that really making staff whole again and addressing those hours of work is a top priority,” says Kiendl, also board president of the Canadian Art Museum Directors Organization.

Other top priorities include strengthening relations with local First Nations, and responding to various calls to action relating to Truth and Reconciliation and Black Lives Matter. “I am committed to ensuring diversity and equity in our organization,” Kiendl says.

“I think it is important that I recognize my privilege; as a white person I’ve certainly had advantages that not everyone has,” he said, when asked about being a white man named to this job. “So I’m committed to doing my best.” Rather than offering a diversity of voices a seat at the table, he says he believes in building the table together.

Kiendl’s first official meeting as director Friday was not at the gallery, but at the Musqueam First Nation. “That was something very important,” he says. He is also organizing meetings with the Squamish and Tsleil-Waututh.

“I want to strengthen relationships with local First Nations, especially in consideration of building this building on unceded territory.”

Unlike some previous VAG directors, including Bartels, Kiendl has spent most of his life, career and education in Canada. He understands intrinsically the way government works, including funding agencies such as the Canada Council for the Arts.

While in the process of unpacking boxes in the gallery, he discovered something that reminded him of a very Canadian project he had worked on years ago. It was a publication he had worked on with VAG curator Bruce Grenville back in 1999, when Kiendl was curator at the Regina Public Library’s Dunlop Art Gallery.

Using scientific polling methods, the institutions worked with Russian expatriate artists Vitaly Komar and Alex Melamid on their years-long People’s Choice project, wherein residents of various countries submitted their visual art likes and dislikes. Using that data, the artists created two paintings: Canada’s Most Wanted and Canada’s Least Wanted. The works were revealed in a special supplement to The Globe and Mail on Canada Day weekend, 1999.

“To create these paintings, they have ostensibly surrendered their artistic license to the masses,” wrote Grenville at the time.

The survey found that Canadians liked traditional rather than modern art (Quebecers were the most accepting of modern art; they also had a predilection for nudes). Canada’s favourite colour: blue, followed by green, and then a surprise.

“Alone in all the world, Canucks rate beige high among their favourite colours,” wrote the Globe’s art critic, Blake Gopnik – a result Kiendl still chuckles about.

“It was one of my favourite projects,” says Kiendl. Now in Vancouver, he finds himself reunited with Canada’s Most Wanted and Canada’s Least Wanted paintings, still in the VAG collection.

There is a lot to be done here, but working with art – and people – brings pleasure, and Kiendl is looking forward to that, too. 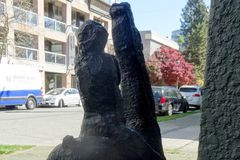 An immersion in the world of Cindy Sherman’s photography at the Vancouver Art Gallery
Subscriber content
October 29, 2019 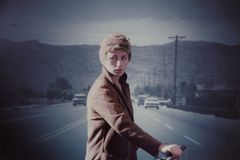 Coronavirus information
The Zero Canada Project provides resources to help you manage your health, your finances and your family life as Canada reopens.
Visit the hub
Follow Marsha Lederman on Twitter @marshalederman
Report an error Editorial code of conduct
Due to technical reasons, we have temporarily removed commenting from our articles. We hope to have this fixed soon. Thank you for your patience. If you are looking to give feedback on our new site, please send it along to feedback@globeandmail.com. If you want to write a letter to the editor, please forward to letters@globeandmail.com.
Comments