On his property in Kingsburg, N.S., Brian Mackay-Lyons keeps some Highland cattle and a flock of sheep, as well as a flock of old buildings. There’s an 1880 barn, a schoolhouse from the 1830s and an old chicken house, all moved from across the province to find a new purpose and place.

Then there are the buildings he’s designed himself, for Mackay-Lyons is an architect by trade. There are a row of wood-and-shingle cottages that suggest a village by the sea. “Cultivation has always been my metaphor for architecture,” Mackay-Lyons says. “That you can build a building in a landscape and not destroy it, but build it up.”

That deep connection to the Nova Scotia landscape has helped make his studio, Mackay-Lyons Sweetapple, one of Canada’s most decorated architecture firms. They hold a fistful of Governor-General’s medals and enjoy international praise.

So what is this proudly regional architect building on a golf course in Central Ontario? A set of cottages, it turns out, that he hopes will build community and embody a sense of place. “Our goal is to get to the universal through the particular,” he says as we drive through the cottage country of Muskoka.

This is a quest of deep significance for architecture. How can design build on, and enhance, the power of a place? And can Mackay-Lyons and his firm do that, even far from home?

When I met Mackay-Lyons, we were heading to the latest site of exploration: Bigwin Island, on Lake of Bays about three hours north of Toronto. A vacation getaway since 1920, the island is now home to a golf club. Its owner, retired U.S. investment banker Jack Wadsworth, launched a design competition for 50 cottages on the island that would reflect the old Muskoka aesthetic of modest, Arts and Crafts-influenced wood cottages. In 2015, Mackay-Lyons Sweetapple won, and this fall, Mackay-Lyons was overseeing the last details on three of these buildings.

As we crossed the lake, the first cottage appeared like a mirage. Its lower walls of black-stained cedar were barely visible, while its roof volume – a great monolithic triangular prism, clad in pale cedar shingles – glimmered hotly in the October sun.

Up close, the buildings revealed more detail, but a similarly elemental presence. Each consists of just a few materials and a set of elements: a “great room” wrapped in glass, a “bed box” in wood, and a big, tightly detailed roof volume overhanging the two. Inside and out, the buildings included few materials, and a minimum of details; the highlight was a tall ceiling that sloped up, lined by cedar planks, to a skylight. These were houses reduced to their poetic essence.

And that, as often with Mackay-Lyons’s work, is exactly the idea. “This draws on the idea of what Muskoka is, how people build here,” he says, “but it has this utopian, archetypal quality that has resonance in other places.”

For Mackay-Lyons, now a hale 64, this is an extension of a lifelong intellectual pursuit. Born in Nova Scotia of largely Acadian stock, Mackay-Lyons came of age in the 1980s, when architecture was struggling against the strengthening tides of global capital and globalized culture. Along with others of his generation, he began to elaborate a distinctly local language, drawing on the traditional building practices and emphasizing regional materials and techniques. This was architecture’s version of slow food: thoughtful, vaguely anti-capitalist and not for everyone.

Through the work and his teaching at Dalhousie University’s school of architecture, Mackay-Lyons fused modernist influences such as Louis Kahn with the material culture of Nova Scotia, particularly boat-building and the woodworking practices that came out of it. The many houses he’s built in his home province often perch themselves on ridges and shorelines like boats in dry dock.

Mackay-Lyons Sweetapple has built a number of larger institutional buildings in Nova Scotia, PEI and Ontario, including a string of infill developments in Halifax’s North End and now the Queen’s Marque mixed-use project on Halifax harbour. Yet it is the houses that express the firm’s essence most clearly.

Mackay-Lyons’s farm, Shobac, where he and his family have lived since 1983, has been home base and inspiration. From the early 1990s until 2013, Mackay-Lyons opened up the site for a yearly project known as “Ghost Lab.” It brought together architects and students each year to construct a wood-framed structure, with their own hands and largely without power tools. “We’ve been teaching architects how hard it is to build, and to respect builders,” he said, “because they know stuff that we need to learn.”

He emphasizes the importance of local knowledge. Architecture needs to have good manners, he says. “That means respecting the place you’re building and having the eyes to understand that climate, that landscape, that culture.”

That, for him, now means Muskoka, and also the American Rockies. Mackay-Lyons Sweetapple has opened a branch office in Denver and is building extensively at a Utah development called Summit Powder Mountain. This mountaintop resort community was founded by a group of young tech executives, and it’s a utopian attempt at community-building – even if its houses are second (or third or fourth) homes for their owners. It’s a long way from Shobac.

Both the Bigwin and Powder Mountain projects raise complicated questions about the relationship between architecture and place. They are “landscape stewardship projects,” he argues, “where you’re taking care of a landscape and you’re building a community.”

It’s not clear how much a golf club can really be a community, and – as Mackay-Lyons admits – this task doesn’t quite match up with the idealism of his youth. And yet he is determined to continue with the language of elemental forms, thoughtfully arranged and tightly built, that have taken him this far. “There is a utopian tradition I’ve always been attracted to,” he says, “of people who do something small that becomes an argument for a better world.”

That is what he’s doing at home at Shobac. As we spoke, Mackay-Lyons was looking forward to making the long trip home, back to the little village he has created, and tending to his flock. “Let me tell you, sheep are very therapeutic. You get off the airplane from somewhere, get home, go up on the hill and lay down with the sheep. It does a lot for you to be there on the ground.” 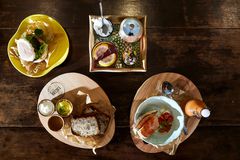 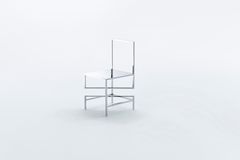 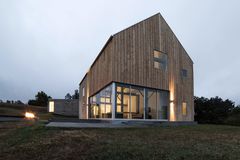