One-hundred-and-seventy-eight cement hands are reaching out of a white wall. Above them are photos of children and, written in black type, a series of questions. “Whose stories remain silent, and whose are forcibly told?” asks one. And another: “What stories hide themselves at the outer layer of the picture frame or under the innocence of these children’s precious faces?”

The installation, which features faces and stories belonging to children who were sent to St. Mary’s Indian Residential School in Mission, B.C., is a solemn introduction to the exhibition it accompanies – There Is Truth Here: Creativity and Resilience in Children’s Art from Indian Residential and Day Schools – which has just opened at the Museum of Vancouver.

The hands, part of Semiahmoo artist Roxanne Charles’s work The Strata of Many Truths, immediately engage the viewer. They seem to represent both cries for help – pull me out of this place – as well as invitations of friendship – come, hold my hand.

“I think there’s a lot of curiosity out there about residential schools,” says Sharon Fortney, MOV’s curator, Indigenous Collections and Engagement. “This is kind of a gentle introduction to the topic.”

There Is Truth Here was organized by the University of Victoria, following many years of research by anthropologist Andrea Walsh, who curated the show in collaboration with survivors and their families. It offers a different way into this dark chapter of Canadian history, where Indigenous children were taken from their families and sent to these schools with the objective of assimilation. Abuse was rampant.

But some children got a bit of distraction from their difficult lives, thanks to teachers who allowed them to express themselves artistically.

The exhibition first opened in Victoria in 2017, at UVic’s Legacy Gallery. “Some of the feedback that was given at the Legacy Gallery … was because There Is Truth Here focuses a lot on the children’s art work, a lot of people took that as the norm,” Fortney says. “They said ‘Oh, look, it wasn’t all bad. They were making art.’ So we felt we needed to address that up front.”

The Strata of Many Truths was commissioned by the Capture Photography Festival as a response to There is Truth Here.

Hence Charles’s striking installation at the entrance to the museum. Working with archival photos from St. Mary’s, the artist has isolated the images of a girl staring through a barbed-wire fence and a boy holding a plate of grapes, making them sort of welcome figures as you walk into the space. There you encounter her 178 cement hands, one of which belongs to Charles’s grandmother, Slhalokowut, a survivor of the residential school.

It’s a pity that Charles’s installation will only be up for the first month of the show, as it provides important context what follows.

There Is Truth Here unfolds in three parts. It begins with work by students of Anthony Walsh, a kind teacher who worked at the Inkameep Day School near Oliver, B.C., between 1931 and 1942. The works here include a fascinating series of paintings on cedar-roof shakes representing the Stations of the Cross. The images of Jesus are similar to common visual representations of Christ – although he is dressed in buckskin – but the people around him, including Pontius Pilate, are Indigenous.

Walsh recognized the artistic merit in his students’ work, and promoted it. One of his students, Francis Baptiste (Sis-hu-lk), went on to create the first work of Canadian art purchased for Buckingham Palace’s King Edward and Queen Alexandria Memorial Collection.

The second section features work made at the St. Michael’s Indian Residential and Day School in Alert Bay, created between 1940 and 1969. The works here are more regimented – based on traditional depictions of creatures such as the eagle, killer whale and raven.

The final section features work by students of another kind teacher, Robert Aller. Aller was inspired by his own teacher, Group of Seven co-founder Arthur Lismer, who advocated for children’s art education. Aller brought those beliefs to the Alberni Indian Residential School in Port Alberni, B.C., and the MacKay Indian Residential School in his hometown of Dauphin, Man., where he led extracurricular art classes. Unlike so many others who were put in charge of these children, Aller – working in the late 1950s and early 60s – appreciated the Indigenous cultural experiences the system was working to crush. As a result, many of the paintings his students made recreated memories from home: family members, fishing trips, an isolated beach.

Aller saw the value in his students’ work, and held on to it for many years before leaving the collection to the University of Victoria. Some 50 years later, the paintings were returned to the artists who made them (or their descendants).

“My painting is of my family,” recalled former MacKay student James Wastasecoot from Peguis First Nation, who didn’t remember the picture when it was presented to him decades later, the wall label explains. “But it makes sense that I would have painted that, being a child and missing your parents a thousand miles away.”

This section, and the exhibit, ends with three devastating works created by former student Gina Laing as part of her art therapy as an adult. One depicts a girl – Laing – alone in the dark basement of the school, trying to calm herself by imagining the colourful flowers outside. In another, the girl’s hair is being pulled as punishment. The final painting depicts the girl being force fed unfamiliar food – spaghetti. The feeding is so rough that the fork has punctured the girl’s mouth; blood mixes with the pasta.

There is a trigger warning ahead of these works and, afterward, a curtained-off respite area where people can sit and process what they’ve seen – the horrors, the innocence, the hope some children miraculously managed to hold onto, in spite of everything. 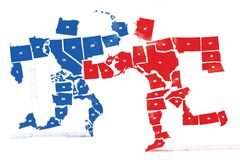 17 A.Y. Jackson works to be auctioned this spring as AGO aims to diversify collection
Subscriber content
March 28, 2019 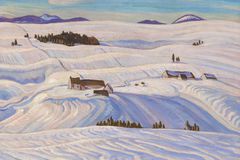 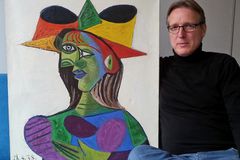