A decade ago, the Museum of Modern Art in New York commissioned a work from Brooklyn artist Mickalene Thomas. Her process began with a photo shoot in the MOMA sculpture garden where she restaged the poses from Edouard Manet’s infamous 1863 painting Le Déjeuner sur l’herbe. That work shocked 19th-century viewers by placing a female nude alongside clothed men in a contemporary rather than mythological setting, but Thomas booted the men and the naked woman right out of the picture, replacing the white figures with three black women sporting fashionable sundresses and 1970s afros.

Then the artist used her photograph as the source for a giant painting in which the flesh of her subjects is rendered in three different tones of matte brown enamel paint, while their colourful clothes and hair are produced with a riot of rhinestones.

That painting is the first thing you see if you visit Mickalene Thomas: Femmes Noires, a new exhibition of the artist’s work at the Art Gallery of Ontario, and its point is obvious: Thomas is literally making space for black women in art. What distinguishes Le Déjeuner sur l’herbe: Les Trois Femmes Noires and raises it well above a political one-liner, however, is its execution – both bold and complex.

First of all, it is massive: A mural-like presence that’s more than seven metres wide and three metres high, it reproduces the women at a scale larger than life-size. They appear as mighty and impassive goddesses, impressing themselves on the viewer with their importance. And yet, they are also distinguishable as real individuals: Thomas uses her friends and family members as models and her paintings very accurately reproduce their photographed faces.

As Thomas asserts the women’s presence so boldly, she also does it joyfully, the collage effect of painted and rhinestone cells flattens the surface, but also celebrates the women with sparkle. There is nothing denunciatory in Thomas’s art: Her critiques of both French Impressionism and high-fashion imagery are affectionate. The artist herself doesn’t speak French and, in an American context, her French titles seem playful, wittily elevating her own work with a soupçon of high culture. Trois Femmes Noires is a happy picture.

This show is stuffed with similarly powerful collaged portraits of African-American women in the guise of figures from art history or as themselves. Here, AGO curator Julie Crooks, who has organized the show which will also travel to the Contemporary Arts Center in New Orleans, includes a small reproduction of Romare Bearden’s Black Venus to give the viewer some context for Thomas’s use of collage. Seeking to free the black figure from stereotype, Bearden turned to collage in the 1960s, recognizing that as a hybrid form it was well suited to a hybridized African-American culture.

Thomas has proved particularly inventive as she applies that idea to her own work, moving from her early photographs of black women in colourfully decorated living rooms to the highly worked surfaces of these painted collages. The show includes two – Portrait of Kalena and Portrait of Aaliyah – that are inspired by Picasso in a reappropriation of his use of African masks that is so technically skilled, the paintings work both as portraits of individual women and as functional examples of analytic cubism.

As Thomas moves these ideas into video, things get more complicated. The AGO show includes two large video installations: Do I Look Like A Lady? is a video wall that creates provocative juxtapositions from footage that features black female performers including Josephine Baker, Naomi Sims, Moms Mabley and Whitney Houston. Los Angelitos Negros is a haunting work in which Thomas and two other performers don wigs and black turtlenecks to restage a video of a tearful Eartha Kitt singing the song of the same title: “Painter if you paint with love, paint me some black angels now.” At the foot of both installations, Thomas includes a seating area decorated in a colourful patchwork of fabrics, welcoming the visitor into spaces that recall the cheerful living rooms of her New Jersey youth, but also explore the gap between the intimate and the public. That’s a statement she makes more emphatically in Je t’aime deux, an erotic 20-minute video installation that features Thomas and her partner, Racquel Chevremont, filming each other’s bodies.

Not all of Thomas’s encounters with the black women who inspired her are as successful as these works. The exhibition also includes a series of stills culled from the 1985 film The Colour Purple and printed on mirrored panels, a set of borrowings too limited to seem evocative.

In contrast, it’s when Thomas gathers all her themes and techniques together that she creates the most intriguingly layered work here. A video entitled Me as Muse features a flickering grid of 12 TV screens showing Thomas herself, naked in the pose of an odalisque, as well as historical nudes dissolving into digital meltwater and dot patterns drawn from Thomas’s own collages. Technically, it’s a piece that brilliantly reproduces the effect of collage in video. Thematically, it courageously positions the artist’s own body on the threshold between the private and public with a gesture that, this time with great seriousness, transforms the black woman from object to subject. The soundtrack for the video is taken from the PBS archives: It’s an interview with Kitt in which the singer describes her orphaned and abusive childhood.

Meanwhile, the sounds from Los Angelitos Negros, the singer’s lament for a black art history, can be heard throughout the exhibition: Thomas has answered the call.

Mickalene Thomas: Femmes Noires continues at the Art Gallery of Ontario until March 24, 2019. 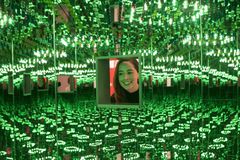 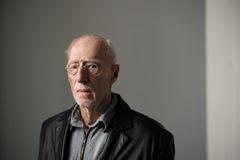 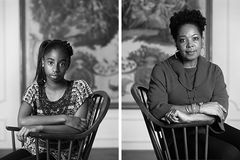