A building can have many lives if it is properly loved, and Paris’s great cathedral has proved this rule for 850 years. This week, the great structure and French society together face a new test.

Notre-Dame – one of the grandest works of European architecture and a beloved Paris landmark – smoulders. After surviving the Franco-Prussian War and the bullets of the Second World War, the cathedral is now badly damaged, its spire and its ancient wooden roof — called “the Forest” — in ash.

Dedicated to worship, it was the work of many human hands: thousands of workers over more than a century, who manipulated great masses of limestone into its walls and buttresses and more than 1,300 logs into its great, 60-metre-long ceiling. A great array of carvings – angels, apostles, saints, gargoyles, chimera – captured the artistry of the 12th, 13th and 19th centuries.

Built between 1160 and 1260, Notre-Dame was one of the first churches built in the Gothic style. The sheer size and grandeur of the space was a revelation to the medieval French eye. In the 13th century, the cathedral was strengthened by the invention of the flying buttress. This innovation took the weight of the roof and spread it out; rather than send these forces into thick stone walls, the buttresses took some of the lateral force outward into massive, separate columns of stone.

This structural innovation allowed for a space that was brightly sunlit, through new windows, and yet also great and broad. Its expansive rose windows were fine works of art in stained glass. As the 12th-century abbot Suger said of a sister church, it “would shine with the wonderful and uninterrupted light of sacred windows, pervading the interior beauty.”

And so it did, but it grew dirty and rundown with time. Gothic architecture, in the age of the Renaissance, was out of favour. After the French Revolution, its 20 bells were melted down to make cannons for the republican cause, prayers at the cathedral ended; only in Napoleon’s reign did it come back into religious use, and it was in rough condition during the early 19th century.

Which is when Victor Hugo, essentially, saved it, with his 1831 novel Notre-Dame de Paris – the novel we know better as The Hunchback of Notre-Dame. The story of Quasimodo and Esmeralda caught the attention of a growing population of readers, and the novel helped them fall in love with the real, aging cathedral. The architect Eugène Viollet-Le-Duc oversaw a renovation of the cathedral that went on for 20 years and reshaped some of its details.

The cathedral remained beloved even in an increasingly secular society, a central part of the scenery in the City of Light. Around 12 million people visited it each year. It was under renovation this week, wrapped in scaffolding, part of a €6-million ($9-million) restoration project. The diocese that governs the cathedral was raising funds from the public for what was billed as a major, 10-year restoration.

‘This is the soul of Paris,’: community shares in firelight of Notre-Dame

The combination of rebuilding and fire is not surprising. Any building is vulnerable to fire during those brief intervals when it is under construction or renovation; we saw this just last year when the Glasgow School of Art’s Mackintosh Building – a masterpiece by the Scottish architect Charles Rennie Mackintosh – burned for the second time. There is talk of reconstructing it.

In Paris, what’s clear right now is that the cathedral’s spire has fallen. But, incredibly, much of the interior appears to be intact. A devout Christian might call it a miracle. But this is certainly the work of human hands: those of the hundreds of firefighters who managed to tame the blaze. What comes next will be a tremendous project in itself: French President Emmanuel Macron is pledging to rebuild the cathedral. The story of this place, it appears, will continue for decades or centuries to come. 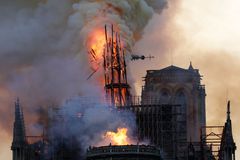