A Canadian artist is demanding a full apology and retraction from divisive U.S. Congressman Steve King, alleging copyright infringement over an image the Iowa Republican used in a Facebook post. The post – which has since been deleted – suggested Republicans would win a civil war over Democrats. The demand for an apology and full retraction is contained in a cease-and-desist letter sent on Friday to Mr. King, who has previously attracted criticism for comments he has made about white supremacy.

“I was outraged to see my image taken [and] used, but I was doubly horrified to see it hijacked by such a hateful and toxic message,” artist Yarek Waszul told The Globe and Mail.

The image appears to be identical to an illustration Mr. Waszul created for The New York Times to illustrate a review of a book about Barack Obama’s 2012 re-election. The image Mr. King posted to social media included “disturbing” alterations to the accompanying text, as described in the letter written by Mr. Waszul’s lawyer. Posted in mid-March, it went viral.

The illustration portrays two blocky figures engaged in a fistfight, reminiscent of the Rock ‘em Sock ‘em Robots game. Each figure is made up of American states – blue on the left (to indicate Democratic states) and red on the right (Republican states). The New York Times headline read “War of Umbrage.”

Mr. King’s post deleted that headline and added his own words. “Folks keep talking about another civil war,” the text on top of the image read. “One side has about 8 trillion bullets, while the other side doesn’t know which bathroom to use,” read the text on the bottom. Mr. King posted the image with the comment “Wonder who would win ...” followed by a puzzled-face emoji.

The image was used “countless” times, according to the legal letter, and became the subject of much media attention.

Mr. Waszul learned about the image when reading the Washington Post that week. “My first assumption was that the Post was somehow using the image without permission but when I clicked, the situation turned out to be much much worse,” Mr. Waszul wrote in an e-mail to The Globe. “After a quick Google search it became apparent one of my proudest illustrations was being dragged through the news cycle behind Steve King.”

Opinion: Alien as a high-school play? Thumbs down to dumbed-down theatre for teens

In the cease-and-desist letter, Mr. Waszul’s lawyer, Paul Bain, writes that “Mr. Waszul has not been credited in any way – which in [this] case, happens to [suit] him fine. The real gravamen of the offence here is the association with words and ideas that are repugnant to our client. There is the suggestion of endorsement of ideas where none exists. … To be very clear, while some ‘folks’ may be ‘talking about another civil war,’ our client certainly is not talking about that; any incitement to war is abhorrent to him.”

The letter, dated March 29, instructs the King campaign to remove, delete and destroy anything using the infringing post by April 5 – and to issue a full written apology and retraction on Mr. King’s social-media accounts.

Mr. King, who won re-election in November, was removed from committee work in January after he made comments in The New York Times that were widely condemned, even by members of his own party. “White nationalist, white supremacist, Western civilization – how did that language become offensive?” Mr. King asked. He later issued a statement saying that his comments had been misunderstood.

“Having my work associated with racism and bigotry in any guise is not acceptable,” Mr. Waszul said.

The Globe did not immediately receive a response to inquiries to Mr. King’s offices on the weekend. 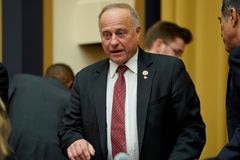 Iowa governor keeps Rep. Steve King on campaign after tweet
December 12, 2017
US Rep. Steve King toasts Border Patrol over deportation
April 19, 2017
Follow Marsha Lederman on Twitter @marshalederman
Report an error Editorial code of conduct
Due to technical reasons, we have temporarily removed commenting from our articles. We hope to have this fixed soon. Thank you for your patience. If you are looking to give feedback on our new site, please send it along to feedback@globeandmail.com. If you want to write a letter to the editor, please forward to letters@globeandmail.com.
Comments