Douglas Coupland’s new installation at the Vancouver Aquarium is as playful as one expects from the pop-culture polymath, but it may also be the most didactic work of his visual-art career. The show, Vortex, is an environmental message delivered in a sea of plastic bottles. The exhibition is the result of an environmental epiphany of Coupland’s own – but has also come with its own environmental cost, involving a few of the aquarium’s guppies.

Vortex is Coupland’s artistic response to the Pacific Trash Vortex, also known as the Great Pacific Garbage Patch. The exhibition’s central installation is an enormous, 50,000 litre tank representing a crowded disaster of an ocean. A Japanese fishing boat is surrounded by the man-made detritus of contemporary life – including buoys, empty oil canisters and countless plastic water bottles.

The debris was found on the shores of British Columbia’s Haida Gwaii; much of it came from Japan after the devastating 2011 tsunami.

Inside the boat are four large figures: A life-sized Andy Warhol is snapping photos of the trash-filled water with a Polaroid camera, and a Tunisian migrant in a life preserver sits atop a yellow Kirin beer crate clutching a bottle of water. Two larger-than-life kitschy bauble figures that Coupland calls Plastic Boy and Plastic Girl look out with their arms outstretched; Plastic Boy holds a smartphone. “We’re all in the same boat,” the exhibit’s literature explains.

The man-made mess at the centre of the exhibition is offset by large, panoramic photos of a pristine Pillar Bay on the west coast of Haida Gwaii, practically untouched by humans, Coupland explains.

The Warhol figure represents the first century of plastics and the African refugee represents the second century, this current one. The happy baubles are the future. With that smartphone, Plastic Boy is documenting the plastics crisis; perhaps through social-media advocacy, he will effect change.

Artistically, the work references Haida artist Bill Reid’s Spirit of Haida Gwaii and the early 19th-century oil painting by Théodore Géricault, The Raft of the Medusa. But the inspiration came from one of Coupland’s own works – Tokyo Harbour.

Coupland’s 2000 installation was made with more than 100 Japanese housecleaning-product bottles that Coupland bought at a Tokyo department store. He brought them back to his hotel room and emptied them down the toilet, where they would have made their way to the harbour (giving the work its name).

In 2013, while recovering tsunami debris on Haida Gwaii, Coupland was struck by something he found at Rose Spit. “The exact same kind of bottles I was buying washed up on the beach,” he says during an interview ahead of the show’s opening. “And it really screwed me up. There has to be some sort of cosmic message there. And suddenly something, which up until then had been interesting, became something else altogether.”

The seed for this show was planted. But finding a museum willing or able to house an enormous water installation proved challenging. Frustrated, Coupland pitched the project to the Vancouver Aquarium. They loved it. That was only 14 months ago.

There’s a second installation in the aquarium’s courtyard next to the café, which employs another recovered Japanese fishing boat – this one with a Yeti character made of multicoloured fishing ropes at the bow, pointing forward.

This boat was traced back to its owner, a man in his late 70s. Coupland visited him in Japan, with an interpreter. “It was a remarkable experience,” he says.

Coupland heard about the tsunami dumping fish inland. “The people far away from the waters suddenly had fish and seagulls shrieking,” he says. As a result, to this day, he says, the sound of a seagull can provoke a negative reaction.

In the exhibition’s enormous water installation, a large taxidermied gull is perched at the bow of the other battered boat (Coupland says it’s like a ghost ship as its origins were never discovered). The seagull – a nod to that tsunami eeriness – is the work of the artist’s brother, Jim Coupland. “We had to find an ethically culled seagull,” Doug Coupland explains.

There are smaller installations on the walls surrounding the giant tank, including three habitats designed to involve live fish.

In one, Lego towers from Coupland’s 2014 Vancouver Art Gallery retrospective are installed in a fish tank, creating a colourful plastic reef inhabited by young freshwater cichlids, which dart among the towers and toward visitors who approach the glass. “Plastics aren’t all bad,” the wall label says, citing Lego as “a beautiful example of plastics at their finest.”

Elsewhere, blue blubber jellyfish share a saltwater tank with transparent, single-use water bottles – plastic not at its finest. Next to it, a freshwater tank is filled with ocean-worn plastics such as laundry baskets. The plan was to pair these plastics with guppies, but the environment proved uninhabitable for the little tropical fish and seven of them died.

“I don’t know why; [there’s] something about [this] fish don’t like,” said Coupland, still making adjustments three days before the May 18 opening.

The aquarium says it closely monitors the behaviour of animals during the period of acclimatization that follows their introduction to a new habitat. After the seven fish died, the aquarium said it was conducting additional testing and monitoring of the habitat to ensure the exhibition is safe and healthy for aquatic life. “Until such time as this can be assured there will be no introductions of more fish,” the aquarium said in an e-mailed statement to The Globe and Mail the day before the show’s opening.

I ask Coupland – a high-volume collector of all kinds of stuff – if the experience of creating Vortex has changed his own life. He says there have been some changes in habit – he carries reusable bags to the grocery store – but also lessons learned.

“It’s made me realize the complexity of the situation. There’s no single button you can push, there’s no magic one thing you can do that it’s suddenly all fixed.”

But he’s not without hope. “I remember when people littered, and it magically ended … so if people can change that that quickly, maybe they can change other things too.”

Vortex is on now at the Vancouver Aquarium (vanaqua.org). 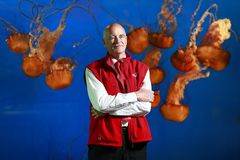