A federal panel of art experts privately warned the then-heritage minister that the government was wrong to let the National Gallery of Canada ship a multimillion-dollar Marc Chagall painting out of the country to be sold, newly disclosed documents show.

In a letter dated April 5, Sharilyn Ingram, the chair of the Canadian Cultural Property Export Review Board (CCPERB), wrote that she and her colleagues were concerned by the decision to grant the Chagall painting an export permit so it could cross the Canada-U.S. border.

The National Gallery was met with a strong public outcry when it was revealed in early April that the Ottawa institution planned to sell off the 1929 Chagall canvas The Eiffel Tower at a Christie’s auction in New York for more than $6-million, in order to raise money to buy a different painting from a Quebec church.

The CCPERB – a mix of academics, art dealers and museum professionals – hears appeals for denied export permits and makes decisions about a special tax break. Because the Chagall was approved for export on its initial application, the case never came up to the CCPERB for an official review. However, the board’s letter suggests it might have blocked the export if it could have.

Although the Chagall sale was later called off, the warning from the CCPERB to the heritage minister is important because it directly addresses an obscure part of government cultural policy that has continued to have major ramifications in the art world this year, affecting both what art can leave the country and how galleries can solicit donations.

“I believe the board's action, in sending a letter to the minister, was the responsible thing to do,” Ms. Ingram said in an interview. “I think the minister's reply to us very much understood the spirit of what we were trying to do. And to really flag that all of us have a commitment to ensuring that the legislative framework is implemented consistently and fairly.”

The letter was obtained through the access-to-information program. The heritage minister at the time was Mélanie Joly, but the portfolio has since passed to Pablo Rodriguez. Mr. Rodriguez’s office said Thursday the government is happy the artwork ultimately stayed in Canada.

Canada’s cultural export and import policy governs both what art can be blocked from leaving the country, and what art is eligible for a particularly lucrative tax break when donated to a museum.

At the heart of the policy is a test: Is the art or artifact of both outstanding significance – say, an important example of an artist’s style – and is it of national importance – for instance, did it play a role in Canadian history.

A Federal Court decision in June upended how the policy was applied. Justice Michael Manson said the government had been too broad in defining what works were important to Canada’s heritage. In effect, the ruling made it less likely for works by international artists to qualify as being nationally important.

“I think the recent decision by Judge Manson … has thrown an even greater spotlight on this,” Ms. Ingram said. “It’s interesting now, although it’s only been a few months, to look back at our concerns about the Chagall issue.”

The government is currently appealing the Federal Court decision. That case involved the blocked export of a French Impressionist painting – the 1892 Gustave Caillebotte canvas Iris bleus, jardin du Petit Gennevilliers – that had been sold by the Heffel auction house to a British buyer in 2016.

Robert Paterson, a University of British Columbia law professor who has studied the legislation, said the ruling brought some badly needed clarity to the 40-year-old rules.

"There’s no doubt about it, these [criteria] are incredibly vaguely written,” Prof. Paterson said. “Who knows what 'outstanding significance’ means. They’re applying, to some extent, aesthetic and quasi-political considerations that can almost mean anything anyone wants them to mean.”

On the export side, owners of valuable artwork or historical artifacts have to get a government permit to take the items out of the country. Canada Border Services Agency asks a curator at a museum with no involvement to decide, in their professional opinion, whether the object is of both outstanding significance and of national importance.

In the case of the National Gallery’s Chagall, the permit was cleared by Kenneth Brummel, an assistant curator at the Art Gallery of Ontario.

The AGO said Mr. Brummel was not permitted to publicly explain his decision.

"For expert examiners, there is a strict protocol outlined by the Ministry of Heritage and all processes were followed. The protocol prohibits an expert examiner from publicly commenting,” AGO spokesperson Naomi Carniol said.

Philanthropist Michael Audain said to be behind payment to cancel National Gallery’s Chagall sale
May 11, 2018 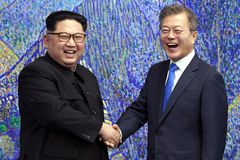