The aftermath of the 1848 French Revolution, followed by such events as two world wars, the Dreyfus affair, even the construction of the Eiffel Tower: The period between 1850 and 1950 saw exceptional political and social disruption in France. It was also a time of revolutionary change in Western art, with France at the centre of that transformation. From the centuries-old French Academy of Painting and Sculpture tradition sprang a resistance, leading to the avant-garde: Impressionism, Fauvism, Cubism, Surrealism and Abstraction. This trajectory is the subject of the exhibition French Moderns: Monet to Matisse, 1850-1950, which recently opened at the Vancouver Art Gallery. The show was organized by the Brooklyn Museum, one of the earliest institutional collectors of French Modernist works in the United States.

With 63 works, the show (which was at the Winnipeg Art Gallery last summer) moves quickly through the century in what VAG senior curator Bruce Grenville calls “a headlong rush.”

I felt that rush, too, but first I had to get past the show’s title. The dates didn’t make sense to me – Monet turned 10 in 1850 and Matisse was born on New Year’s Eve in 1869, so how could their work cover the span of this exhibition? I accept that this is roughly (and generously) the period of their productive lifetimes, as Monet was born in 1840 and Matisse died in 1954. But anyone expecting a pile of work from either artist may be disappointed; the show includes three works by Matisse and only one by Monet, despite the star billing.

Further, Monet, perhaps the most celebrated French Impressionist, is not the correct starting point for this show; nor is Matisse its proper end. The correct starting point would more accurately be Gustave Courbet, Jean-François Millet or Jules Breton, whose early groundbreaking resistance of the Academy’s control paved the way for everything else. (But those names won’t sell as many tickets.)

As for the end point of the show, while the latest piece is a 1946 painting by Yves Tanguy, the utterly captivating Les Plongeurs Polychromes (1941-42) by Fernand Léger felt like the natural end for me.

But first, to the beginning.

The French Academy, established in 1648, controlled the universe in which artists operated. A certain aesthetic was valued, exhibitions were juried, and there was a hierarchy of genres: history painting (depicting specific scenes from history, the Bible and mythology) at the top, followed by portraiture, genre pictures, landscapes and still life paintings.

French Moderns begins with a few textbook examples of the Academic tradition, including Jean-Léon Gérôme’s The Carpet Merchant of Cairo (1869), with its highly detailed, very smooth surface and no hint of brushwork. You can almost feel the rug, looking at it. Next to it is Jehan Georges Vibert’s An Embarrassment of Choices (A Difficult Choice), painted before 1873, where a cardinal in red robes bends over, hat behind his back, to sniff an ornate bouquet of flowers. The earliest piece in the show is also in this section, The Little Cook (1858) by Pierre-Édouard Frère, who found great success in the traditional Academy system.

But then, a break from the Academy. A resistance grew, with artists challenging the status quo by turning away from these traditions, with brushwork that created a mood rather than a polished, realistic picture. A fine example of this is Courbet’s The Wave (c. 1869), a raw, evocative seascape.

Postrevolution, workers were lionized as subject matter, as in Breton’s magnificent The End of the Working Day (1886-87) and Millet’s Shepherd Tending His Flock (early 1860s), described in the accompanying catalogue by co-editor Lisa Small as “simultaneously heroic and bleak.”

The best-known rebels of the French Academy were the Impressionists, whose landmark first major exhibition in 1874 included work by Monet, Renoir, Pissarro, Alfred Sisley, Eugène Boudin and Berthe Morisot, all of whom are represented in this exhibition.

The Impressionists depicted specific places, such as Monet’s Rising Tide at Pourville (1882); and events, as in Sisley’s Flood at Moret (1879). And they did it in radical ways, employing light and colour to portray their subjects, rather than meticulous realistic detail.

One of Degas’s many bathing female nudes, Nude Woman Drying Herself (c. 1884-86), is included in this show – monumental in size, but monochromatic and likely unfinished. The joy of this is the access the viewer has to study Degas’s techniques and forms.

Morisot’s Madame Boursier and Her Daughter (c. 1873) is one of the few works by women shown here. The portrait of the French woman and her rosy-cheeked daughter, it turns out, has a history in Vancouver. When VAG staff uncrated it, they were delighted to see a label on the back indicating it had been at the VAG in 1953, brought here by Doris Shadbolt for her French Impressionists show.

If you stand at a certain angle you can look at this painting and look back at William Bouguereau’s The Elder Sister (circa 1864). This reduction is also magnificent, but much more resonant of the Academy tradition, with its smooth lines and obvious allusion to the Madonna and child. They were painted about a decade apart, but it looks like they come from different worlds.

Many of the works in this show reflect the concerns of the day.

Another reduction, Rodin’s The Age of Bronze (first reduction, 1876; cast 1967), was so realistic in its original life-size form that the sculptor was accused of casting the figure from a live model. “He went to great pains to explain that no, he had actually observed this,” Grenville explains. Rodin’s model was a 22-year-old soldier who had been wounded in the Franco-Prussian Wars in the 1870s. The work, with the demoralized soldier holding his hand to his head, was a protest against war.

The Symbolist artist Odilon Redon’s Jacob Wrestling with the Angel (c 1905-10) is one of many works of the time that used the biblical story to reflect the idea of struggle, a dominant philosophical principle in that period.

The show is an absorbing walk through the evolution of form and technique. Cézanne’s The Village of Gardanne (1885-86) is an experiment created with a grid of interlocking flat geometric shapes, anticipating Cubism. In Lajos Tihanyi’s The Critic (1916) we see the influence of Cubism and Expressionism.

Marc Chagall’s The Musician (circa 1912-14) is a small vibrant delight, displaying influences of Cubism and Fauvism. But it is overwhelmed by its frame and as a result, poorly lit, with the top of the small painting – the musician’s eyes, forehead and hat – in shadow.

Another tremendous Fauvist work is Matisse’s Flowers (1906), with vibrant splashes of colour expressing the feeling these flowers evoke, rather than providing a faithful representation. This painting is alive, rather than lifelike.

Compare Matisse’s modernist flowers with Vibert’s Academic bouquet, being sniffed by the cardinal.

In the final gallery, Surrealism and Abstraction are highlighted. Alexander Archipenko’s elongated green Bronze The Ray (1920s) feels a world away from Rodin’s work earlier in the show, so lifelike it caused a scandal.

That work that felt like a natural ending to me, Léger’s Les Plongeurs Polychromes, is a Cubist-inspired tumble of limbs and faces and doves. Painted during the Second World War after Léger escaped France for the United States, the work was inspired by swimmers the artist saw at a pool in Marseille in 1940. “It was impossible to tell whose head, leg and arm belonged to whom,” he had said.

But the painting, like Rodin’s sculpture, also speaks to the horrors of war: limbs separated from bodies, humans looking forlorn, doves looking on, helplessly. Things are upside down, topsy-turvy, a mess.

What has the modern world wrought? Chaos. And beauty. 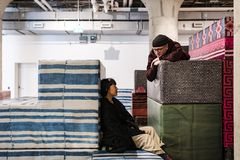 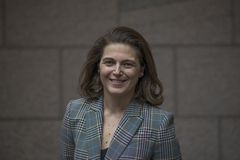 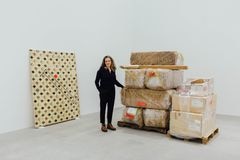