The justification for organizing a big exhibition of Canadian and international art on the shore of Lake Ontario every other year sounds like a Buddhist koan, or perhaps a surrealist joke: Nobody wants another biennial, so Toronto is organizing a biennial.

“The biennial landscape was getting crowded; there was fatigue,” said Patrizia Libralato, executive director of the inaugural Toronto Biennial of Art, which launches Saturday. “We knew we would have to do a very special model that would speak to Toronto and want to make people come to Toronto.”

The best-known biennials – in Venice, at the Whitney Museum of American Art in New York – are sprawling attempts to summarize the art of the moment and produce tense competitions among artists vying for attention and prizes, and visitors jostling to spot talent and identify trends. The lesser known – and, since the globalization of the art market in the nineties, there are hundreds of them, from Athens to Yinchuan, China – ape the biggies or follow any number of different formulas, and come and go with the financial tides. Montreal’s survey of contemporary Canadian and international art declared bankruptcy after its 2016 edition, while the city’s Mois de la Photo, centered on lens-based art, became Momenta Biennale de l’image in 2017 and is in the midst of its 2019 edition. Meanwhile, the continuing Vancouver Biennale creates an open-air museum, mounting public art installations around the city.

But in Toronto, which is hosting its inaugural biennial starting this month, Libralato and chief curator Candice Hopkins are looking to Liverpool for inspiration.

“One criticism of biennials is that they can be territorializing. They just take over a space without engaging with what was already there,” said Hopkins, a Canadian who co-curated the 2018 Santa Fe biennial. In Britain, Liverpool is a “perennial biennial,” she explains, pointing to it as a model of a big event that has made an effort to embed itself in its hometown and reach out to locals. So, Toronto will include lots of site-specific work and address the place and its history – especially its Indigenous history.

But wait a second. Why does Toronto need a biennial in the first place?

First of all, its artists, and Canadian artists more generally, seem to need it. Libralato believes Canadian artists are not getting the international attention they deserve and thinks back to 2007, when Toronto artist Luis Jacob participated in Documenta, the once-every-five-year exhibition in Germany that defines the cutting edge in contemporary art. A former commercial art dealer, Libralato noted how Jacob’s participation jump-started his career and increased international interest in other Canadian artists too. Three years later, the local visual-arts community organized a symposium on the idea of a Toronto biennial. In 2015, the City of Toronto paid for a feasibility study and both the Ontario Trillium Foundation and TD Bank pitched in seed money. After a decade of planning, here it is.

The biennial is also an event that could do things for the city itself, which would explain why both Mayor John Tory and city councillor Kristyn Wong-Tam have been supporters from the start. Prestige international art shows attract attention from global thinkers and tastemakers, and Libralato and Hopkins perceive intense interest in Toronto from abroad, citing a list of international colleagues looking for an excuse to check out the city.

“Everyone is curious to see what a biennial in Toronto looks like,” Libralato said. “[It’s one] of the most diverse cities in the world and it is leading the conversation on indigeneity.”

That will be a central theme of the event, an art exhibition that began with a document by Kahnawake Mohawk artist and performer Ange Loft outlining the Indigenous history of Toronto.

About half the artists who are participating are not Canadian and many were invited to read the Indigenous brief and visit Toronto beforehand so they could create work that spoke to the place. Half of the work in the biennial will have been commissioned specifically for the occasion from such international artists as Shezad Dawood of Britain, Arin Rungjang of Thailand and Maria Thereza Alves, a Brazilian living in Europe.

Canadian contributions include a site-specific piece about Toronto history by Jacob himself as well as work by AA Bronson, formerly of the Toronto collective General Idea and now living in Berlin; Vancouver Indigenous artist Dana Claxton; and Hamilton-born, Paris-based installation artist Kapwani Kiwanga.

For Torontonians themselves, the sprawling exhibition may give them a different sense of their city: Taking water as another theme, the free event intends to animate the waterfront and let citizens into buildings not usually open to the public.

The two major group shows are being mounted in the expansive premises of a former car dealership at Parliament Street and Queens Quay near the Port Lands, and in the Small Arms Inspection Building, a former munitions factory in the decommissioned Arsenal Lands in Mississauga. That east-west spread, quite coincidentally, has the same footprint as the Toronto Purchase, the much disputed 18th-century agreement between the Mississaugas of the Credit and the British Crown, further tying the exhibition to local history. With events at Harbourfront and Ontario Place, as well as a performance by Althea Thauberger and Suzanne Kite at the so-called stone frigate HMCS York, an onshore naval centre on the western waterfront, the biennial may awaken locals to their lakeside location.

“Biennials can offer people a different view of the place they thought they knew," Hopkins said. “Toronto, despite being a Great Lakes city, has its back to the water.”

Northward from the lake, institutions from the Art Gallery of Ontario on Dundas Street West all the way to the Art Gallery of York University in North York will also be contributing special exhibitions, as the whole visual-arts community gets in on the action.

“There was a consensus this was something Toronto needs, that can elevate Toronto both at home and abroad,” Libralato said.

If it succeeds, there will be another edition in 2021 – Hopkins and her co-curator, Tairone Bastien, are already in the planning stages – and both Canadians and foreigners will be marked by what they see. Most specifically, a Toronto biennial intelligently engaged not only with the city’s urban and natural environments but also with both historic and contemporary indigeneity could introduce the topic to U.S. visitors trapped in debates about race and immigration with no reference to First Nations.

In a recent review of the Whitney Biennial, a prominent New York critic described his first-ever encounter with the term settler to describe a non-Indigenous North American – and he clearly didn’t like it. Maybe he needs to visit Toronto.

The Toronto Biennial of Art runs at multiple locations from Sept. 21-Dec. 1, with two main group exhibitions at 259 Lakeshore Blvd. E. in Toronto and 1352 Lakeshore Rd. E. in Mississauga. Admission is free.

Three highlights of the Toronto Biennial of Art

The Drowned City: Inspired by the utopian architecture of Ontario Place and its geodesic dome, curator Charles Stankievech is creating “an atmosphere” inside the Cinesphere theatre that includes multiple soundscapes and videos – and one scent, created specially for the occasion. Inspired by J. G. Ballard’s early cli-fi novel The Drowned World (1962), the exhibition will address humanity’s relationship with the environment in deep time, from the prehistoric to the postapocalyptic. The exhibition incorporates much historic sound art and video work, including R. Murray Schafer’s pioneering 1973 soundscape Oceans Sounds. More recent pieces include The Opera of Prehistoric Creatures, in which contemporary French artist Marguerite Humeau resurrects the cries of the dinosaurs. The Drowned City runs from 11 a.m. to 5 p.m. every Saturday during the Toronto Biennial, and can be experienced on a drop-in basis.

Leviathan 5: London artist Shezad Dawood is engaged in a massive, multidisciplinary project about the environment and humanity that he launched at the Venice Biennale in 2017. It includes what is projected to be a 10-part film about the great creatures at the bottom of the sea and the migrants travelling across its surface. The futuristic narrative investigates marine ecology, migration and mental health, and the Toronto Biennial has joined forces with Fogo Island Arts in Newfoundland and the Museum of Contemporary Art Toronto to commission Leviathan 5: Ismael, an episode set on board a cargo ship whose captain has biblical delusions. Leviathan 5 will be screening through Dec. 1 at 259 Lakeshore Blvd. E, where it can be viewed through a handmade fish net, while both that episode and Leviathan 1 will be screening at MOCA until Nov. 3.

The View from Here: In the Oak Room at Union Station, Toronto artist Luis Jacob is pairing maps and documents from the city’s history with his own photographs of similar sites. An Italian map from 1677 shows the territory of the Huron and Petun peoples and “A new map of Upper and Lower Canada” from 1778 shows the area just after the Toronto purchase, while recent satellite images plot the Greater Toronto Area from 300 kilometres up. The photographs show fragments of current urban geography including the mouth of the Don River and the Leslie Street spit, a piece of land built entirely from the city’s demolished buildings. A smaller show at 259 Lakeshore Blvd. E., the Biennial’s main Toronto exhibition hall, includes another series of photographs and multiple books about the city. 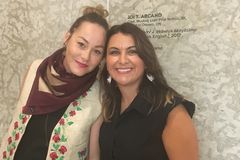 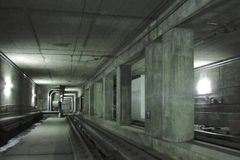