Few Canadians will have heard of the Siksika rebellion of 1895, but it’s the subject of dark family lore among the descendants of Anglican missionary John William Tims.

Angered by recessionary cuts to food allowances, forced enrolment in a residential school and attempts to stop the annual sun dance, the Siksika (or Blackfoot) were increasingly unhappy with the conditions on their Alberta reserve. Then diphtheria broke out. In April, the government rations man was killed by the father of a dying child who had been refused food because he had been withdrawn from the school, and in May, the death of another child led to protests and threats of violence against Tims, the unpopular school principal who enforced attendance. Sources disagree on what happened next, but the family story was that the clergyman fled for his life as his house, school and church were burned to the ground on the day the sun dance was banned.

The episode may not have made it into the history books, but today Tims’s great-grandson is confronting it directly, apologizing to the Siksika for his rigid ancestor’s genocidal rule. It’s no ordinary apology, either, because Michael Tims is better known as AA Bronson, member of the General Idea artists’ collective, founder of the artist-run publisher and shop Art Metropole and a leading Canadian conceptual artist, now living in Berlin. He has returned to Canada to publish his apology as an artist’s book and distribute the slim volume at the Toronto Biennial of Art. The gesture represents a very rare example of a personal, rather than official, apology for past wrongs against Indigenous people in Canada.

And the Siksika are responding in kind: Siksika artist Adrian Stimson, a descendant of Old Sun, who was chief at the time of the rebellion, has also created an installation about Tims’s legacy for the biennial. He is matching Bronson’s display of photos and documents about the rebellion with work about the Old Sun residential school, named for his ancestor and which his own father attended before it was finally closed in the 1970s.

“For Indigenous people, apologies are a dime a dozen. There is cynicism,” Stimson said. “But this was an opportunity to build trust. … The real apology happens between people, not between the government and people, but between individuals.”

Bronson, 73, has been thinking about his family history for decades, aware from a young age that there was something wrong. Tims’s son – Bronson’s grandfather – continued in the family business, running a residential school on another reserve, and Bronson’s father had run away from home at 14 because of the abuse and violence that surrounded him.

“There was a whole sea of stuff that was not talked about,” Bronson said. “The darkness was evident from the not talking, the stories that weren’t told.”

The one story that did circulate was that of his great-grandfather’s flight. Bronson researched it as a young artist back in the seventies and even considered writing some kind of biography, but he abandoned the project when his career with General Idea took off. When Canada 150 came around, he returned to the topic, thinking, “I am getting old. I should do it.” He had noted a few other examples of artists’ books apologizing to Indigenous peoples, one in Canada and one in Australia. But they lacked a personal connection.

He was introduced to Stimson by Candice Hopkins, curator for the biennial, and found a willing collaborator in an act of direct engagement. Five years ago, after the death of his father, Stimson returned to live on the reserve to help his mother. He dug into the history, consulted the chief and council and concluded he would be honoured to participate in some kind of reciprocal project.

“It is not so much about the apology, it’s about recognition that someone is listening,” he said.

The project takes the form of the book by Bronson and his research assistant, Ben Miller; their display of material about Tims and the rebellion; and the art installation by Stimson. The Siksika artist includes fifties school photos of his father and all the other boys in his class; his own painting of girls at the gender-segregated residential school; and enlarged pictograms, including one of a burning church, based on images in Siksika winter counts, the Indigenous records of a year’s events.

The provocative centrepiece, Iini Sookumapii: Guess who’s coming to dinner?, is a table set with English china and silverware ready to host a conversation between Bronson and the Siksika Nation. On each plate, there is a small bronze sculpture of a buffalo in the style of romantic 19th-century art of the American West. It was the collapse of the buffalo herds, from European overhunting, that forced the Siksika onto the reserve in the first place. A schoolhouse light, from the Old Sun school itself, hangs over the table.

So how will this unusual conversation unfold? Boxes of Bronson’s printed apology stand nearby and the artist read it for a performance at the exhibition’s opening. It is a free-flowing, poetic and expansive text that finally asks whether it is possible to apologize for genocide, while Miller’s documentary essay attempts to pin down what really happened in 1895.

Tims appears to have removed the relevant pages from diaries and letters covering that year, and the story of a dramatic escape on the day of the sun-dance ban is contradicted by newspaper, police and government agents’ accounts. They make no reference to a fire. And the RCMP tended to blame the incident on Tims for his aggressive enforcement of attendance at the school and his heartless dismissal of grieving parents.

However, in his essay, Miller warns that Tims’s unpleasant personality should not overshadow the colonial system of reserves and residential schools that was at the root of the rebellion.

Bronson’s text concludes: “I have no apology for genocide, my words make no difference.” But whatever his gesture represents, it feels more alive than many an official apology. And it has been accepted by the Siksika, who will welcome the installation to the reserve in the spring.

“How often is it that an individual comes to the nation in this way?” Stimson asked. “We have to pay attention.”

A Public Apology to Siksika Nation is on display at the Toronto Biennial of Art, 259 Lake Shore Blvd. E., to Dec. 1.

Toronto Biennial is bringing the world to Toronto and Toronto to the world
Subscriber content
September 22, 2019 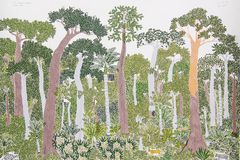 How the Toronto Biennial of Art will stand out in a crowded landscape
Subscriber content
September 22, 2019 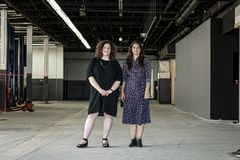 CBC series In The Making peeks behind the curtain for intimate portraits of Canadian artists
September 21, 2018 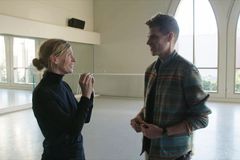