The architecture of the 20th century often engaged in a struggle with history: aiming to replace it with something shinier and more rational. I.M. Pei pursued a different path. His buildings were clearly products of their time, but they were shaped by a complex sensibility that ranged backward as well as forward.

Mr. Pei, who died on Thursday at his home in New York at the age of 102, significantly shaped the skylines of Toronto and Montreal in the 1960s and 1970s. But he was best known for his addition to the Louvre in Paris, where a glass pyramid brought light into an underground lobby while offering a dramatic contrast with the existing architecture.

Such a dialogue between eras was important to Mr. Pei, who, more than the other leading Modernists of his generation, resisted the idea of a new, universal language for architecture.

Born to an affluent family in Guangzhou in 1917, Mr. Pei came to Boston in 1935 to study architecture. Here he encountered some of the European architects who had defined Modernism: Harvard University dean Walter Gropius had founded the influential Bauhaus school, and his curriculum aimed toward a “New Architecture” for the 20th century while teaching zero architectural history.

Mr. Pei was skeptical. His upbringing in China, where his family had a home in the historic city of Suzhou, left him with a real understanding of one specific cultural tradition and an awareness of what the Western radicals were missing.

Out of school in 1955, Mr. Pei took a path that was unusual for an ambitious architect: He went to work for a developer, William Zeckendorf and his organization Webb & Knapp. Mr. Pei hired a former student, Henry Cobb, and others to join him. They worked often for Mr. Zeckendorf on apartment and office developments, in-house and then as an independent firm in New York.

The biggest and most important of these projects was Place Ville Marie in Montreal, to be built over sunken CN Rail tracks downtown. “We needed something with enough critical mass to force change on Montreal,” Mr. Zeckendorf recalled later. The project, overseen by Mr. Cobb, combined the abstract forms of Le Corbusier – seen from above, it takes the shape of a cross – with a collection of mid-sized elements that shape something like a medieval piazza. Yet, it also inaugurated the Underground City network, for better and for worse.

In 1968, it was announced that Mr. Pei’s firm would come to Toronto with a city-changing project: the headquarters for the newly created Canadian Imperial Bank of Commerce. The site at King and Bay streets held the buildings of both CIBC’s parents, and the Bank of Commerce’s 1930s Art Deco building was the tallest tower in the British Empire.

It survived, under Mr. Pei’s direction. While the Toronto-Dominion Bank had levelled a whole block across the street for its headquarters by Mies van der Rohe, the Canadian Imperial Bank of Commerce scheme gave the 1930s building some breathing space; Mr. Pei’s office even designed a new, ornate stone facade for part of the old tower that had formerly been hidden. They added to this two low buildings wrapped in a pale limestone, which spoke to the city’s old masonry, and a great new tower, wrapped in textured stainless steel and grey glass, that rose 240 metres into the sky.

They added a public square and also an underground concourse; Mr. Pei’s main lobby sent escalators down to a subterranean room. That opening has now been closed, but the underground labyrinth known as the PATH still contains thousands of Torontonians each workday.

Above ground, this combination was and remains wonderful. With CIBC about to move, Mr. Pei’s low buildings may now be demolished, in a significant trade off for the city. However, the main building will retain its pride of place, no longer the tallest thing around but still among the best-made.

Mr. Pei’s legacy includes numerous cultural buildings, often in concrete. These include the Kennedy Library in Boston and the East Building of the National Gallery of Art in Washington.

But the greatest and most controversial of these is his project to remake the Louvre, completed in 1989. Building on 700 years of tradition, he took the neoclassical grid of the palace complex and turned it inside out: covering one courtyard, and digging beneath another for a grand space covered by his famous pair of highly engineered glass pyramids. Here, “The first and greatest challenge,” he recalled in a 2008 interview, “was history.” A challenge, to be resolved respectfully. 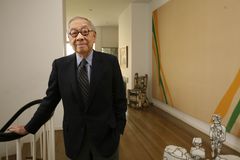