At the Vancouver Art Gallery, your immersion into Cindy Sherman begins immediately. Walk through the admission doors, and you are surrounded by eight different versions of her in a single, wraparound mural. In one portrait, she sports an anatomically correct baggy beige body suit and comfy grey socks, holding a Merlin-like sword. In another, she dorkily pairs a pink and white floral dress with running shoes; in her gardening-gloved hands she holds a bounty of scallions. These different personas – seven in colour, one black and white – share an aesthetic and, of course, a model. They are set huge against a pastoral black and white landscape: a calm body of water, large leafy trees, the backgrounds mirror-images of each other. The monumental 2010 mural – the first piece you encounter and also the last – is a larger-than-life welcome, beckoning. Step inside, folks. To the carnival that is Sherman’s imagination.

Sherman, who was born in New Jersey in 1954 and lives in New York, assumes different roles and characters for her portraits, using her body, her face and most compellingly, her brain.

Cindy Sherman, master of disguise, wants you to know her work is not selfies

This retrospective is her first major exhibition in Canada in 20 years. It includes some 170 works, including Untitled #603, 2019, a Sicilian balcony-set new work created for the Vancouver show, being exhibited for the first time. The other works in the show date as far back as 1975, when Sherman was an art student at State University College at Buffalo and experimenting with her own image.

It is a continuing experiment that has made her one of the world’s foremost conceptual photographers; one of the world’s most influential artists, period. Sherman famously plays with her own image and photographic technology to take on a role and create a fully realized scene. The works are almost always untitled, so you, the viewer, can come up with your own story.

She works rigorously and on her own. She is the conceiver, the prop-gatherer, the makeup artist, the prosthetic-placer, the model, the image manipulator, the Photoshopper, the everything. (One job she sometimes has to hand off to someone else out of necessity is the taking of the photograph itself.)

You walk through the show and are exposed to her image again and again. And yet if she walked into the gallery and brushed by you, you might not know it was her. I wouldn’t, anyway.

There is Sherman the young art student, naked and bound in electrical cords that also become bikinis and self-explosive devices in a series of photos, Air Shutter Release Fashions, 1975. There is Sherman as a forlorn teenager in Untitled #90, 1981, lying on a couch, her droopy eyes staring at the 1970s-era phone she had been hoping would ring. In Untitled #165, 1985, an androgynous figure in a baggy gingham dress is barefoot and bucktoothed, perched behind a tree in a dark forest – looking terrified, but also terrifying. Is Sherman playing the monster about to pop out from behind the tree, or the victim, hiding behind it? Is s/he predator or prey?

In Untitled #216, 1989, she is a crowned Madonna with child, a bulbous prosthetic breast poking out, in a photograph that honours and parodies Renaissance painting. In Untitled #474, 2008 she becomes a society woman, a patron posed against the background of portraits at the National Arts Club in New York, dressed in a sequined gown that screams affluence, her nails perfectly done, expertly placed streaks of grey in her coiffed hair and glossy lips, which appear to have been subject to some sort of cosmetic procedure.

Then in Untitled #545, 2010/12, she is dressed in snow white vintage Chanel, right down to matching gloves and delicate, impractical boots, posed against the rugged earthy landscape of Iceland.

Does this sound repetitive? Oh no. It’s fantastic.

A Sherman image on its own offers a bring-your-own-interpretation delight. But the depth of this retrospective allows for a rare immersion into her work and insight into her process.

The show is presented somewhat but not strictly chronologically and includes work from her major series, including Rear Screen Projections, Centerfolds, Masks, Clowns, Flappers, Fashion, Fairy Tales and Untitled Film Stills – the career-defining 1977-80 series created to look like publicity stills from movie sets.

There are three segments from her Cover Girl series, each featuring three magazine covers: the original (Cosmopolitan, Redbook and Vogue), a second version in which Sherman has made herself up to resemble the original cover model and a third in which, still in model mode, Sherman makes a funny face. The magazines promote articles such as “How to Calm Men’s Fears About Women’s Growing Strength,” and “Orgasm Is Yours If You Follow These Simple Instructions.”

One gallery holds several works from her Sex Pictures series, created with dolls, mannequins and other props. Explicit and creepy, these works earn their “may not be suitable for some viewers” warning.

In the four corners of the exhibition are floor-to-ceiling photo reproductions of Sherman’s New York studio. In one corner, her bookshelves are loaded with volumes about art, sex, makeup and more, as well as vinyl records, CDs, and various bric-a-brac, including two ABBA dolls (the men) and a small framed photo of Sherman and a childhood friend dressed up as old women, taken around 1966.

In the next corner, we see Sherman’s mood board, which includes photos of early Hollywood starlets, a Jennifer Aniston magazine cover and a painted image of Barack Obama.

In the third corner, we see her props – wigs, prosthetics, a stuffed animal, bins filled with who knows what? And in the final corner, another spot in her studio that is essential to her practice: her orange makeup trolley set against her green screen.

A Cindy Sherman show of this breadth would be momentous anywhere, for sure. But this retrospective, organized by the National Portrait Gallery in London in collaboration with the VAG, feels particularly important in Vancouver, like it has landed in the right place.

Vancouver is a ground zero for conceptual photography – home to the acclaimed photoconceptualist Jeff Wall, as well as Rodney Graham, Stan Douglas, Ian Wallace and others who have become associated with what has come to be loosely known as the Vancouver School. It is really exciting to look at Sherman’s work in that context. She, too, is a conceptualist, giving us tableaux that set our minds on fire.

Sherman’s work was developed separately and distinctly from what is happening in Vancouver, but there are parallels that exist, if only in the viewing. For instance, Untitled Film Still #37, 1979, where Sherman poses next to a white brick fireplace and landscape painting, a stack of newspapers on a chair next to her, brought to mind Graham’s The Gifted Amateur, Nov 10th, 1962. In this triptych, Graham portrays an artist creating an abstract painting, newspapers scattered all over the floor, a white stone fireplace in the corner.

This is work that has emerged out of different contexts and conditions, but it shares a zeitgeist. Still, Sherman brings us something that is vastly different; for one thing, eliminating entirely – other than to critique – the male gaze.

Cindy Sherman is at the Vancouver Art Gallery until March 8.

Cindy Sherman, master of disguise, wants you to know her work is not selfies Subscriber content
October 25, 2019 Age of You charts the development of the ‘extreme self’ at the Museum of Contemporary Art Toronto
October 6, 2019 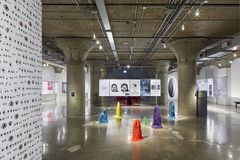 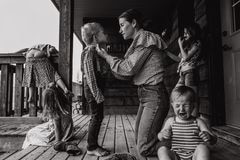