At Qaumajuq, the new centre for Inuit Art at the Winnipeg Art Gallery, two types of stone rub shoulders under the Winnipeg sun. Slabs of grey Tyndall limestone on the gallery’s 1971 building reach out along Memorial Boulevard and meet a new scalloping wall of white granite. Two moments in time, two stones, two textures.

But the crucial encounters will happen at the street below, where a two-storey glass wall allows light – and people – in from outside. Visitors can walk freely into this space, called Ilavut (“our relatives” in Inuktitut), and meet a glass-walled vault which cradles 4,500 stone sculptures from 30 communities across the North.

This new 36,000-square-foot wing, designed by Michael Maltzan Architecture with Cibinel Architects, opens officially this week, and the architecture has to accomplish some cultural diplomacy. It represents Inuit culture in the South, 2,000 kilometres from Iqaluit. It’s an addition to a beloved building that already seemed complete. And it’s been created largely by an architect from Los Angeles.

How does it fare? Looking across the internet from Toronto, it’s hard to say for sure. But it seems to be a major success, blend the architects’ spatial savvy with the museum’s ambitions to decolonize itself, reframe Inuit art and welcome the city in.

This has been a decade-long project for the WAG, which for historical reasons has a very strong collection of Inuit art. The gallery started to consult with Inuit and other Indigenous leaders a decade ago, and in 2012 selected Maltzan, who has a global reputation. His team was charged with adding on to the back end of the triangular 1971 gallery, a late-modernist masterpiece by Gustavo da Roza. The building includes new galleries, a theatre, education spaces and storage.

Maltzan’s main move was to produce a form that is abstract and somewhat enigmatic. “The building isn’t a set of four lines and straight corners,” he said from his California studio. “It isn’t a clear geometry. And for me, that seems a way of capturing that endlessness, the fluid forms that you start to experience in the North.”

In other words, there’s no mimicry here; Maltzan aims to interpret, rather than literally imitate, the qualities of space and light that he found on a tour of the Arctic.

Maltzan acknowledged that the building “has multiple responsibilities,” to Inuit art, to downtown Winnipeg and the 1971 building. Curatorially, it breaks some ground. Many Inuit art works are small in scale, and these have usually been presented through small vitrines. The strategy here is the opposite. The top gallery, named Qilaq, or “Sky” in Inuktitut, is both broad and tall. It soars up to a 30-foot ceiling dotted by 22 skylights, each a five-metre cylinder that channels a pure stream of sunlight and sky views. (It’s also dotted and striped with artfully placed vents, a bravura composition itself.)

Adding onto Da Roza’s building was a difficult task urbanistically and architecturally. Maltzan’s gambit was to use a contrasting form and similar materials. He considered employing more Tyndall stone, the fossil-flecked limestone characteristic of Winnipeg; instead he chose smaller, paler bricks of Bethel white granite from Vermont.

To some degree these choices reflect Maltzan’s distinctive sensibility. He usually works with large, pale masses that feel elemental – most famously on a series of cultural and housing projects around L.A.’s Skid Row. There’s a clear lineage to the Portuguese architect Alvaro Siza, whose influence he acknowledges. But if sculptural, pale masonry buildings make sense in Lisbon and perhaps Los Angeles, do they make sense here?

Why not? Inuit art seen in this place represents an ongoing exchange between Inuit and the rest of Canada, a set of ancient traditions being actively re-interpreted. An inventive design language seems apt.

Maltzan and Steven Borys, the WAG’s director, are very clear what all this is supposed to accomplish. Borys emphasizes the gallery’s ambitions for its already strong education programs (aided by seven rebuilt studio spaces on the top level), and to welcome everyone into the gallery – especially Indigenous people.

That attitude shapes the architecture. Borys says the WAG’s Indigenous advisory circle “was fundamental” to the design process – not only in prominent moves such as the use of Inuit names for the main spaces, but also in more subtle tools of welcome. The entire main floor of the gallery is now free to access. You might walk through the building without noticing the info desk on the back wall or the security guards.

You will certainly notice the stone carvings on display in that glass-walled “visible vault.” This is Qaumajuq’s most prominent feature. It connects the gallery floors with storage and conservation space in the basement; WAG curators will use it actively. However, visitors won’t see texts or any other curatorial intervention unless they ask. Instead, they’ll enter Ilavut and see the art up close, far from the North but unmediated and within reach.

Opinion
The Pritzker Prize has a lesson: Take care of our towers
Subscriber content
March 21, 2021 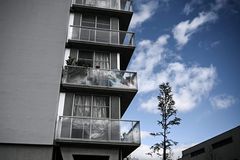 How Toronto is celebrating its Irish connection
Subscriber content
March 17, 2021 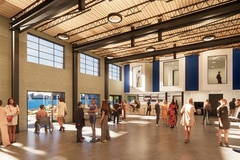 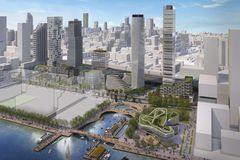