In a Toronto studio more than 2,000 kilometres from his home, Cape Dorset artist Quvianaqtuk Pudlat smiles with pleasure as a printer lifts the arm of a large press to reveal an image of two Arctic foxes on the paper beneath. One is grey, the other is red, and the confrontation of their twisting bodies creates a bold circle of action.

“They are playing, not fighting,” Pudlat explains. “No teeth.”

Pudlat, who spent two weeks in Toronto on an artist’s residency before the coronavirus crisis shut the city down, drew the foxes with markers, pens and coloured pencils; now he’s watching as printers turn his drawing into a silkscreen print.

It’s a technical process, a method originally designed for high-resolution commercial printing that was popularized for fine art by Andy Warhol in the 1960s. Using his original coloured drawing for inspiration, Pudlat has drawn the foxes on five different transparencies, one for each colour in the final print. Five mesh screens, with open areas that will let the ink through and a blocking medium for blank areas, are created from those transparencies, and the printers then squeeze ink through them onto paper sitting on a printing bench almost as big as a pool table.

Hand printing from artists’ drawings happens all the time at the Kinngait Studios in Cape Dorset, Nunavut, where Pudlat usually works, but most prints are made using the stonecut, lithograph and etching techniques, all of which draw or incise the imagery directly onto the printing plate. Part of the point of the Toronto residency at Open Studio was to give Pudlat access to a full-scale print studio and introduce him to the silkscreen process just as the 58-year-old artist’s new career is blooming.

“All my life I worked in construction, as a labourer,” he explains, adding he was forced to stop due to ill health. “I’m due for a hip replacement. I didn’t work for a year, so I did drawing instead. I do drawing 9 to 5, Monday to Friday. … It pays the bills.” Previously, he had produced carvings but stopped when the dust began to bother him.

His subjects are all around him in the West Baffin region. “I know the environment, the birds, the animals. My subjects are on the land,” he said. Come spring, he and his wife visit their cabin near Cape Dorset to fish and birdwatch. Still, he also finds the internet convenient, providing poses for animals, closeups or action shots. He created a pair of prints during the Toronto residency. One shows the foxes up close from a low perspective, as a photographer might possibly capture them; the other shows them from above, splaying them out in a bird’s-eye view that creates the distinctive flattening common to Inuit prints.

Open Studio, an artist-run printshop, has organized exchanges with Kinngait Studios since the 1970s, but in most cases, it has sent master printers north to provide training. This is only the second time an Inuit artist has come south; the last time was a residency by Tim Pitsiulak, eight months before his death from pneumonia in 2016.

“Having a studio that is so remote requires constant maintenance and materials to keep up the momentum,” said William Huffman of Dorset Fine Arts, the West Baffin Eskimo Co-operative’s southern marketing arm based in Toronto. “[The residency] is one artist working on a particular project, but the artists are very generous sharing their experience when they get back to Dorset.”

The exchanges are now virtual too. During Pudlat’s residency, organizers set up a video conference with Kinngait so the artist could tour his northern colleagues around the southern studio.

Back in Cape Dorset, he also plans to visit the local high school to discuss his Open Studio experience and encourage students to consider the arts as a profession.

He’ll be glad to be home; it’s his first visit to Toronto in 50 years, and he finds the place oppressive. One day, he took the ferry over to the Toronto Islands, just to escape the city. The first thing he noticed was the birds singing.

'The city gives you the time to find inspiration’: Why Canadian artists are flourishing in Berlin
Subscriber content
March 19, 2020 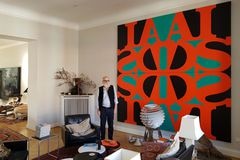