After only two seasons on the job, Josephine Ridge has resigned as artistic director of Luminato, a major Canadian arts festival of international standing.

The resignation is a troubling development for a Toronto-based event that has struggled to find its footing artistically and financially over the past few years. Luminato chief executive Anthony Sargent, who hired Ms. Ridge in 2016, described the parting as a “sad” development.

He said funding issues played a role in Ms. Ridge’s resignation. “She came with a very particular and very rich kind of artistic vision,” Mr. Sargent said in a phone interview with The Globe and Mail. “And I think she has experienced some difficult moments in relation to the business process and some of the budgetary situations. These were important issues for her.”

Under Ms. Ridge’s directorship, the multidisciplinary festival expanded from 10 days to 19, the planned length for the foreseeable future.

“Her work here fundamentally changed the cultural positioning of the festival in Canada,” Mr. Sargent said. “The changes in direction she initiated are profoundly part of the structure and thinking of the festival and they will define how we look for a successor.”

Previously artistic director of the Melbourne Festival and executive director of the Sydney Festival, Ms. Ridge took over artistic control of Luminato as it readied its extravagant 10th-anniversary residency at the mothballed, cavernous Hearn Generating Station. That edition of the festival was an expensive one, leaving Ms. Ridge to deal with budgetary constraints as she sought to establish what she called the downtown event’s “blueprint” for the years to come.

The blueprint was for the festival to be more engaged with its home country. As well, Ms. Ridge sought to strengthen Luminato’s relationship with its host city and to become friendlier with the arts community.

According to Mr. Sargent, the 2019 edition of Luminato is largely programmed already, leaving Ms. Ridge’s legacy essentially a three-season reign.

As for government funding in the future, Mr. Sargent is optimistic he can work with the new Ontario government led by Doug Ford. “I’ve yet to find a government that is simply and intrinsically opposed to the arts,” said Mr. Sargent, a veteran British arts-world leader who took over as Luminato’s CEO in 2015. “And I’m not expecting that to be true of this provincial government.”

Ms. Ridge had replaced Jorn Weisbrodt, the German arts administrator who served as Luminato’s artistic director from 2012 to 2016. As for Ms. Ridge’s successor, Mr. Sargent said he would not limit the search to Canadians. “It’s an international arts festival and I think that wouldn’t be the right approach. But we’ve very conscious of Canadian relationships and it will be an important part of our thinking that we recruit someone who really respects and understands our commitment to it.”

In 2017, Ms. Ridge’s was very much committed to the long-term future of Luminato. “We need to think about the next 10 years,” she told The Globe, “and continuing our story and our journey.”

And now, Luminato’s journey continues, with the navigator specifically hired to steer the ship no longer on board. 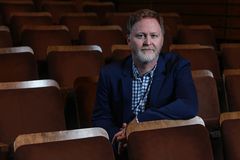