At first glance, the jacket looks just like a fabric round your grandmother might have hanging on the wall above the kitchen clock. It’s got the same delicately embroidered border, and the same vividly coloured threads. But instead of asking visitors to “bless this mess,” it’s a portrait. Threads are layered on top of each other, creating an eye-catching picture of a cartoon lion, with a spiky orange mane and a blue and white headband. The medium is the same, but this definitely isn’t your grandmother’s cross-stitching.

The artist of this piece, and dozens of other needle-work pieces, is Emma McKee, also known as The Stitch Gawd. Working out of Chicago, McKee is credited with bringing the world of cross-stitch to the hip-hop scene. The jacket with the lion emblazoned across the back, for example, was worn by Chance the Rapper during his Colouring Book tour, and it’s just one of the jackets McKee has stitched for Chance. She’s also made clothing for the likes of Kendrick Lamar, SZA and others, and is entering the world of oversized art pieces, like a recently commissioned window display made out of embroidered shoelaces for an Adidas store in Chicago.

As a craft, cross-stitch has been around for centuries. One of the most well-known tapestries, the Bayeux Embroidery, is a massive 70-meter cloth depicting the Norman conquest of England and the Battle of Hastings, and dates the craft to the 11th century. But today, artists such as McKee are popularizing and revamping the practice, creating subversive, feminist and often sexualized pieces that call out societal expectations for young women. There’s been a rise in cross-stitch and embroidery in McKee’s own home town, with several middle schools introducing cross-stitch into their art programs, and art collectives hosting pop-up craft circles.

Among the earliest examples of cross-stitch were Victorian-era samplers: strips of linen where crafters could practice their basic stitches, often containing the alphabet, floral patterns or simple Bible passages. The stitching was primarily done by women, and was often trivialized as a frivolous hobby. But the delicate embroidery also served a larger purpose.

“[The samplers] helped young women develop their literacy skills, their needlework skills. All of which were part and parcel of growing up and becoming a desirable mate,” explains Sarah Quinton, curatorial director of the Textile Museum of Canada in Toronto. She’s also seen a rise in the number of women taking up the craft recently, partly because of its simplicity. “It’s not intimidating. It’s not huge technique … so it is very accessible to a great number of people.”

Since those early samplers, the basics haven’t changed much. A pattern is created on a grid, and pierced onto fabric with overlapping stitches, creating a small X – the cross. The simplicity has allowed today’s artists to explore a wider range of subjects. Instead of Bible passages, crafters quote Beyoncé or display feminist hashtags. But with each new exploration of the art form, there is a direct thread to the past.

“I think that women today, young women in particular, are standing on the shoulders of women of previous generations,” Quinton said.

McKee agrees. She sees the new wave of cross-stitch as a way to rebel against the idea of craft as not “real” art, or work. “We like to denigrate women’s work, we like to put it in the craft space. It’s a cute little hobby, it’s not serious work or effort.”

Women across Canada are using cross-stitch and needle work to oppose those traditional ideas about gendered work. From small-scale crafters building a following on Etsy and Instagram to professional artists showing collections at galleries across the country, Canadian women are using the traditional handicrafts of their grandmothers to highlight the women’s issues of today.

Richardson first learned how to cross-stitch when she was about 8 from her grandmother. Now, as a professional artist and costume designer, Richardson still uses the techniques her grandmother taught her, but as a way to highlight the differences in their work – and particularly, the choice to sew, or knit, or stitch at all.

“[My grandmother] would do that stuff for free, and because it was just kind of expected of her,” Richardson said. “I’m choosing to do this activity that was placed on women in a way to keep them oppressed.”

It’s that idea of unseen and unappreciated female labour that Richardson explores in her art. Under the pseudonym of The Hobbyist, Richardson uses handicraft techniques such as stitching and weaving at an unconventionally large scale. Rather than knitting a scarf or a tea towel, Richardson knits poster-sized wall-hangings. In a recent installation in Halifax, Richardson created a series of life-sized garbage bins, woven together out of tinsel, polyester and discarded fabric scraps.

“It kind of becomes absurdly large and really in your face,” Richardson said. “My work is always hyperdecorative and really vibrant.”

For Richardson, the synthetic fabrics, along with the tinsel and glitter, are a direct rejection of the current Instagram trend of organic linens and wool, or what she refers to as “a fetishization of pure materials.” Instead, her work highlights the fake opulence of her materials, juxtaposing them with the often quaint technique of the craft.

Opening her Etsy store, Crxss Bxtch, in 2015 was a chance for Lawlor to turn her artistic hobby into a side business. Combining cross-stitch with embroidery, Lawlor has a delicate touch, often working on very small-scale pieces: a two-inch patch emblazoned with “Beat it, Creep!” exemplifies her style. Although the work is meticulous, it’s also meditative, part of what she describes as her self-care regimen.

From the beginning, Lawlor has imbued her work with feminist themes, such as body positivity. One bestseller on her page is a hoop pattern entitled Breast Friends, featuring a dozen intertwined breasts in all shapes and sizes. Many of her other works are even more explicit about the female body, using intentionally provocative language that might make some grandmothers do a double-take. A four-inch embroidered round typically costs $30 on Lawlor’s store, and she often gets positive messages from her customers.

“On the surface, I think that people appreciate the humour in the juxtaposition of lewd language with an art form that is traditionally very polite,” Lawlor said. “It is about evolving an art that is deeply associated with women throughout history, and using it as a form of social commentary. I pick words that I think will help champion my not-so-secret feminist agenda.”

For Lawlor, the evolution of cross-stitch has been a move from an ornamentation of objects to the expression of values. She uses her craft to explore themes of activism, feminism and sexuality.

As for censorship, Lawlor has censored herself just once in her work: when she named her Etsy store.

When Gabel began working with embroidery, sewing and stitching a decade ago, she created art meant to challenge and subvert traditional expectations of femininity. But since then, she has also found joy in the craft itself.

“What about just, like, being proud of craft for craft?” Gabel asked. “There are no rich white dudes telling you what you can and can’t do, and what doesn’t count. It’s for the people.”

Now, Gabel rejoices in using craft techniques in her art practice. Primarily a quilter, Gabel pays particular attention to the small details – such as creating her own fruit and vegetable dyes to colour her own fabric piece by piece.

In a 2016 installation, Gabel produced a set of six quilts, each showcasing the international Maritime symbols for MAYDAY, the distress call. Each quilt was meticulously cut and sewn to the size of a baby blanket; Gabel used the project to work through the changes and challenges of new parenthood.

“It was sort of a cry for help in all forms,” Gabel joked.

But the blankets are also decidedly humorous, and that’s part of what draws Gabel to this type of work. Using feminine traditions to comment on contemporary women’s issues – from body image to motherhood – is not just subversive. It’s a chance for artists and consumers alike to laugh and find common ground.

“It’s crass and it’s pissed off, but it’s funny,” Gabel explained. “We’ve got to be able to express how we feel, but also laugh at ourselves about what hurts and what sucks right now.” 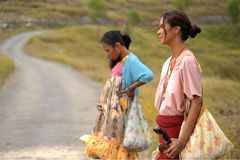 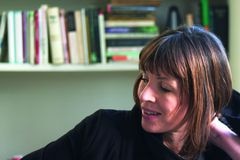