Ethiopian artist Elias Sime has said his work is not about recycling – a statement that might sound puzzling or deliberately provocative if you are looking at his art.

He creates large-scale canvases where abstracted landscapes emerge from meticulous accumulations of recycled electronics, including motherboards, electrical wire and computer keys. Part of the obvious delight for the viewer is in identifying bits of trashed computers or cellphones and marvelling at their creative reuse.

Now showing at the Royal Ontario Museum, these are works that are easy to describe yet must be seen in person to be believed.

But Sime’s statement is not a misdirection but rather some gentle prodding for the viewer to think further about the implications of his materials. In another revealing quote posted in the ROM gallery, he says that every time he picks up a cellphone motherboard the only thing he thinks about is the excitement of its first owner, their eagerness to use the device and their hope for the future.

In Canada, most of us can take a continual supply of disposable electronics for granted and count on never seeing the things again after we toss them. Sime lives in Addis Ababa and, in a short documentary included in this show, you’ll visit the teeming marketplace where he can sort through buckets of e-waste for artistic materials. This is a society where even a discarded phone or laptop has value.

So these fabulous canvases consider our relationship with technology, with each other and with the planet. (This is Sime’s first major Canadian exhibition; the show is being toured by the Ruth and Elmer Wellin Museum of Art at Hamilton College in Clinton, NY.)

In Tightrope: in Boxes, one work from the ROM’s own collection, the motherboards become a miniature city while a grid of thin coloured wire carefully coiled into squares suggest the fields beyond. In Tightrope: On the Edge, the motherboards could be read as a coastal city while green circuit boards would represent the ocean. And in the spectacular Tightrope 3, the space appears to be something out of science fiction: The brown masses of the motherboards are broken up by expanses of shiny black fibreglass, appearing as if from deep space.

The show is not chronological but perhaps it’s best to start at the back, where a few early works reveal how Sime developed his remarkable sense of scale and his proclivity for density. An early image of a cactus from 2003-2004 is made with thread and buttons; its moonlit sky is rendered with a dense buildup of long blue stitches (rather reminiscent of quillwork), while the plant itself is a mosaic of small green buttons.

The patience and detail work required of a craft that leaves no surface uncovered hearkens back to the anonymous artistry of medieval Ethiopian manuscripts or metal work. It’s an attitude that takes full flight in the Ant and Ceramicists series of 2009-2014, which includes one sewn canvas where a swarm of ants is created with thousands of black stitches. And in Splash of a Pebble in Muddy Water (2006), the accumulation of beige thread is so dense, it’s not even visible as sewing.

That image of the ants, in which the individual is lost in the teeming group, seems particularly pertinent to Sime – and the experience of living in a densely populated African city. And yet the materials also recognize a friendly personal touch. Computer keys are as pleasantly familiar to most of us as the everyday buttons Sime uses, and in two recent works, Silent 1 and Silent 2, the artist combines the direct human presence with the obvious environmental resonance of his materials. Prying hundreds of beige keys off old keyboards and applying them to the canvases in grids, Sime allows patterns of wear, fading and staining to emerge. These faint variations suggest the sweep of clouds or fog, yet they also remind you that different users’ fingers once hit these keys.

The ROM has provided heavily didactic texts suggesting you consider the relationships that are invoked here; they seem unnecessary. Similarly, in the few instances where Sime includes the human figure, the work becomes more simplistic. Tightrope: The Dominant, in which the outline of one human head sits atop another, feels less evocative than other works.

No need to include a person to suggest the human presence already hinted at by keys or buttons. All of us walk Sime’s tightrope, desperately attempting to balance technology, ecology and ourselves.

To Sept. 6 at the Royal Ontario Museum in Toronto.

After COVID-19 hiatus, the ROM reopens in Toronto with a new great whales exhibit
July 17, 2021 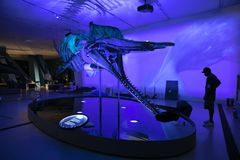 Andy Warhol retrospective at the AGO places biography before art, with mixed results
Subscriber content
July 22, 2021 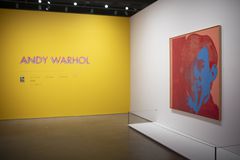 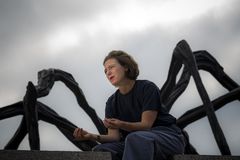