At the Ottawa Art Gallery, Cheryl Pagurek’s Connect has been installed in the furthest corner of an upper floor in a darkened room behind a curtain. Nonetheless, the interactive video installation is a good place to begin the discussion about technology, art and audience that the gallery’s summer exhibition schedule is initiating.

If you enter the room, you will notice that its darkened screen is punctuated by body-shaped sections where you can see video. It may take a bit of moving about, and the effect depends on how many people are there, but you will realize that the frame of imagery is a rough outline of your body and that by moving about, you can control what you see.

So what’s on this screen you are opening with your own movement? A compilation of images about security, community and the world. Historic black-and-white films of the New York “ghetto” fish market and Ottawa’s ByWard Market are juxtaposed with recent images from the Times Square webcam as well as Ottawa traffic-camera footage. Meanwhile, a string of headlines and news reports offer a familiar parade of rhetoric and disaster. So, there is a tension in the piece between the lively sense of community evoked by the bustling markets and your own participation on the one hand, and the threat of surveillance, media saturation and even violence suggested by the omnipresent cameras and news content on the other.

The Ottawa artist’s ideas and her media fit hand-in-glove: Connect may be technically complicated, but thematically it’s a straightforward examination of the joys and dangers of our evolving relationship with technology. You move, you get the message.

Creating interactive art this smoothly accessible is not easy, and the OAG is also offering a retrospective that reveals some of the form’s more ungainly manifestations. Ottawa artist Juan Geuer, who died in 2009, was a remarkable polymath, a visual artist and self-taught scientist who worked for decades as a draftsman at the National Research Council. From there, he launched a conceptual art practice that would help the viewer experience natural phenomena in works that are a cross between science-centre exhibits and art installations.

Sometimes these are simplistic: In one piece, mounted in the gallery’s lobby, you are supposed to observe geology simply by walking through a sculpture that presents a photograph of a seam of rock at face level. Other works are witty: Eye to Eye suggests you peer at another person through the eye holes of a mask – and uses mirrors to confound your expected perspective. And sometimes, the art represents a fiercely complicated technical feat: Built over six years in the late 1980s and early 90s, Loom Drum invites you to sit on a bench included in the piece and watch as a round screen registers 30 years of the earth’s seismic activity with flashing points of light.

And yet, Geuer’s work is often at its most compelling when its audience is an undirected afterthought. The Ottawa show includes several drawings in which the artist sketched faint grid patterns on white mylar sheets, as though mapping mysterious charts of unknown phenomena, creating a minimalist art that simply requires intense viewing.

Three Toronto art exhibitions to check out this summer

In that way, all art can be considered interactive: It asks that we look. The highlight of the gallery’s current programming is an opportunity to see Howie Tsui’s Retainers of Anarchy, an animated scroll that experiments with visual storytelling. The piece, which was first shown at the Vancouver Art Gallery in 2017, is inspired by several Chinese art forms. One was a digitally animated version of a traditional scroll that the Vancouver-based artist, born in Hong Kong, saw during a visit to China; another is Wuxia, the 20th-century martial-arts fiction based on chivalric tales from China’s imperial past.

Tsui’s work is a 25-metre-wide screen which was displayed as a single horizontal piece in Vancouver, but has been bent in the middle to fit in the Ottawa gallery: Now, it opens out to the viewer like a book. On the screen, there are two areas of animated activity. One takes place in a historic landscape, where quietly violent scenes feature roaming warriors, a flying condor and a lynching; the other is in a modern Hong Kong tenement, a depiction of Kowloon’s notoriously lawless Walled City, where dark moments of domesticity and criminality play in the various apartments.

You would have to watch Retainers of Anarchy for more than an hour to see all the possible action: It is created by five different video channels that generate the imagery randomly. The effect is engrossing because you quickly realize that as you watch one horrific little scene to your left, you are missing action unfolding on your right – or vice versa. Or action may be still happening in the landscape when the screen suddenly fills with a single scenario in the tenement.

Rather like those attempts to offer readers a choice of plot lines in digital fiction, Retainers of Anarchy allows you to take different paths, yet it also underlines the elliptical nature of that strategy. Visually, the piece echoes the comic book, in which you can see the whole page at once but have to respect the left-to-right, top-to-bottom route to follow the story, yet it also defies narrative hierarchies, forcing viewers into an acute consciousness of their viewing.

Not coincidentally, its stories are undercutting social hierarchies, too: Wuxia’s tales of roving bandits and lone heroes were often censored by the Communist regime and by juxtaposing that genre with equally violent (but modern) scenes of Kowloon, Tsui positions martial-arts storytelling as a subversive genre. Yet even before entering into this complex mix of traditional and pop-culture references, a visitor watching Retainers of Anarchy has already been enveloped in an altered mode of viewing. You can’t ask art to do more than make you see anew. 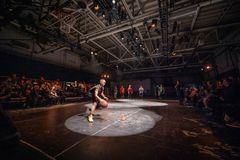 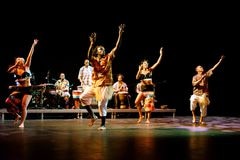 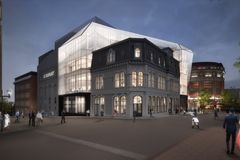 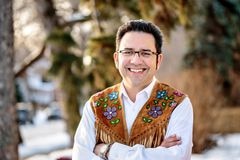