Multimedia artist Shawn Theodore had “the best summer ever” last year when he was tapped by activist football player – and Paper magazine guest editor – Colin Kaepernick to take 10 photographic portraits. The portrait subjects include activist and scholar Angela Davis, the Exonerated Five (formerly known as the Central Park Five), #MeToo founder Tarana Burke and actor Taraji P. Henson. “We travelled from New York to Montgomery to LA,” the Philadelphia-based artist said. During his assignment, among other notable moments, Theodore sat in on a private conversation between Davis and Kaepernick. “It was just an amazing trip, to be with people who cared about the project.”

“The project” was an issue of Paper magazine that centred on Kaepernick’s Know Your Rights youth camps, which he founded in 2016. In all, Kaepernick has held the free youth-empowerment camps in seven U.S. cities and one “pop-up” camp in Amsterdam. For the Paper issue, Kaepernick chose people to be photographed who embody the 10 fundamental human rights at the core of his camps, inspired by the Black Panthers’ Ten-Point Program.

This month, at Toronto’s Harbourfront Centre, the photos are having their world debut as a public art installation, part of the programming for Kuumba, Toronto’s 25-year-old celebration of Black History Month. Festival curator Ashley McKenzie-Barnes saw the Paper issue in August and arranged for the exhibit at Kuumba. “I was really impressed with what Colin did in terms of bringing advocacy to an artistic forum,” she said.

Theodore agreed that Kaepernick’s “gentle sense of leadership” was evident during his editorial duties, including in the art direction of the photographs. Unbeknownst to Theodore, the ex-NFLer had collected some of the artist’s early work and admired the techniques he was using at the time. Theodore used the same approach for this series, with the portraits taken as silhouettes, washed over in primary hues. “Anyone who identifies with being black, when you see a silhouette of a black person, there’s a shared knowledge and experience,” Theodore said. The silhouettes evoke the “deep, dark and expansive” quality of the colour black and black self-identity, he said.

As for his use of primaries, he noted that, in the public space, black people are often associated with flashing red-and-blue police lights or yellow crime-scene tape. “What [the colours] indicate is danger,” the artist said. “But in this case, you have black bodies commanding the spaces rather than being observed in a negative way.”

Last weekend, the Harbourfront Centre exhibit was already garnering interest, as some visitors took selfies with a scarlet-hued portrait of Kaepernick. While nine of the “rights” photos are displayed inside the centre, the ones of the Exonerated Five, who represent “the right to be free,” are exhibited outdoors in backlit cases. Formerly known as the Central Park Five, these men were convicted and served time in the infamous Central Park jogger case of the late 1980s, but were later exonerated. The Kuumba festival organizers made the deliberate choice to place these portraits outdoors, adjacent to the Queen’s Quay Terminal building, to evoke how black and brown people are (mis)perceived in public.

For his part, Theodore is pleased that his work has attracted additional interest. Indeed, after the publication of the Paper issue, “it’s been a roller coaster ever since,” he said, with three upcoming shows planned for this year, in New York, Orlando and Swarthmore, Pa. “I’m glad that [the ‘Rights’ series] is moving around and has legs and is being seen by the people of Toronto,” he said. 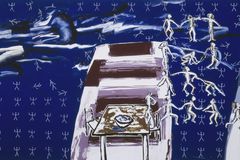 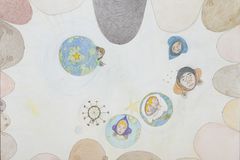 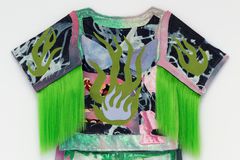