Dakshana Bascaramurty
Published May 19, 2020 Updated May 21, 2020
For Subscribers
Comments
Please log in to listen to this story. Also available in French and Mandarin. Log In Create Free Account

The Cree artist Kent Monkman, famous for his provocative paintings that depict violence against Indigenous people, has for the first time publicly apologized for his most recent work – which many interpreted as showing the sexual assault of Prime Minister Justin Trudeau in front of a laughing group of Indigenous women.

Monkman, whose work has hung in New York’s Metropolitan Museum of Art, the Art Gallery of Ontario and the Denver Art Museum, released the painting Hanky Panky last Thursday, initially as a series of cropped images on social media.

The painting depicts a council of women, inspired, Monkman said in his artist’s statement, “by the okihcitâwiskwêwak, the traditional council of female Cree law keepers who held authority over matters relating to the land.” The women are gawking and laughing at the sight of a panicked-looking man, who bears a striking resemblance to Trudeau, on all fours with his pants at his ankles being forcefully held down by a woman with a ferocious expression. Miss Chief Eagle Testickle – Monkman’s two-spirited alter-ego – towers over the man on the ground, holding up a sculpture of red hands. A Mountie is sprawled face-down in front with his pants lowered. Watching the scene is a group of anguished-looking men who resemble former prime ministers, among them Stephen Harper and Sir John A. Macdonald.

An image of the whole work and an artist’s statement, which described the scene as consensual, were posted to Monkman’s account on Saturday. Shock, disappointment and anger spread across social media on the May long weekend. Many critics said it was disrespectful to women and Indigenous people, especially those who are two-spirited, to depict the female council as watching and enjoying such a violent scene.

“I think the fact that there was a depiction of sexual violence and that I had to witness that was very intense and that it was done in such a disrespectful manner in front of our aunties and kookums [grandmothers], who are so powerful and should be respected," said Lindsay Nixon, a Cree-Métis-Saulteaux art historian and an editor of Canadian Art magazine.

Nixon added that a critique that Monkman’s art is intended for a non-Indigenous audience has circulated in the Indigenous art world for some time.

“There’s always this conversation that [it] is for Canadian audiences and a white spectatorship,” Nixon said.

This particular painting forced criticism of Monkman out in the open.

The themes of sex and retribution for colonialism weave their way through much of Monkman’s work, which is occasionally satirical, but jaye simpson, an Oji-Cree Saulteaux trans woman and writer in Vancouver, said the combination of the two in Hanky Panky crossed a line.

“When the intentions of a sexual activity is retribution, that is inherently violent,” simpson said.

By Monday evening, Monkman posted a lengthy apology for the painting online.

“As a cis-gendered Two-Spirit Cree man, I have always wished to prioritize the safety and well-being of non-binary, trans, Two-Spirit and women viewers,” he wrote. “I see that with this work, I have failed. I wish for my work to resist the colonial traumas inflicted upon my own family and so many others for generations, not to perpetuate harm.”

Monkman’s artistic process usually involves elaborate photo shoots with models, often recruited through social-media casting calls, whose likenesses are included in his paintings. He apologized directly to them, too.

“Their likenesses in this work in no way reflects who they are or what they stand for in their real lives. I regret that by including them I have put them in harm’s way,” he wrote.

Brad Tinmouth, the creative director of Monkman’s studio, requested images of the painting not be reproduced “in order to prevent further harm being caused to the community by it circulating wider than it already has.” Monkman declined an interview and did not respond to written questions from The Globe and Mail on Tuesday.

While the artist’s intent may have been to empower women, Courtney Skye, a Mohawk podcaster and research fellow at the Yellowhead Institute, said the piece elicited the opposite response from her.

Still, she was pleasantly surprised by Monkman’s apology and emphasized a hope “that Kent’s relationships within the Cree community are healed and I hope his aspirations for healing and transformation do happen for Cree people.” 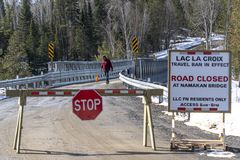 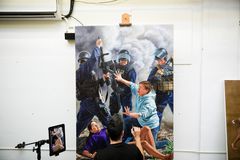 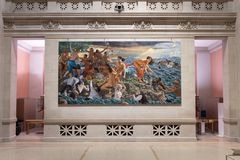