A multimillion-dollar Emily Carr painting that sold to an international collector in New York last month left Canada despite an error on its government-issued export permit.

Last June, the Canadian Heritage Department cleared the 1912 Emily Carr painting Skedans for export to the United States, where Sotheby’s planned to auction the work for more than US$3-million. Its promotional campaign was rare for a Canadian painting, but the scene of totem poles on Haida Gwaii failed to find a buyer, and the auction house later said it was sold privately to a collector who -- according to art dealers with knowledge of the sale -- does not live in Canada.

A painting such as Skedans would require an export permit because it is more than 50 years old and worth more than $15,000 – placing it on a “control list” of cultural property that might be subject to an export delay. If the Canada Border Services Agency considers such a permit might be required, it passes a form to an expert examiner. The expert then assesses if the item is indeed on the control list and whether it is of such outstanding significance and national importance that its loss would damage Canadian culture.

The painting had been easily cleared for export, on a form that the government now admits contains an error on one of its most important questions.

The export permit issued for Skedans, which was obtained by The Globe and Mail under access-to-information law, shows that the expert examiner from the Art Gallery of Ontario initially marked “Yes” to the question of whether the painting should belong on the control list. Correction fluid was then used to cover up that box, and the “No” box was checked instead.

An object that is not on the control list is clear to leave the country. The examiner also said the painting was either not of outstanding significance or not of national importance.

“I was quite surprised it got an export permit,” said Michael Warren, a Victoria art dealer who had worked with the previous owner to sell the canvas in Canada before it was consigned to Sotheby’s. He confirmed the new owner is not in Canada, which means the painting has left the country for the foreseeable future. “It’s a rare painting. It is one of the best Emily Carr paintings out there,” he said.

When asked by The Globe about the permit, the federal government said the painting was in fact always on the control list and that the form was subject to “administrative error.”

“The whiteout error does not affect this conclusion [to issue a permit],” said Daniel Savoie, a spokesperson for the Department of Canadian Heritage. “The appropriate process was followed to issue the permit.”

No explanations for the decision were provided either on the form or by Mr. Savoie. The Art Gallery of Ontario declined to comment.

While the export means no Canadian museum has the opportunity to acquire the work, it might further enhance Ms. Carr’s international reputation – and her prices. B.C. collector Michael Audain, who did not bid on Skedans in New York, said the painting was museum-quality and that he hoped it might now wind up in a U.S. institution.

“I consider the buyer to be a lucky person and I hope they donate it to a public museum," he said.

Classic Canadian art has drawn more international attention in recent years after exhibitions devoted to the Group of Seven and Emily Carr were mounted in the U.K. and the U.S. In its promotional material for Skedans, Sotheby’s cited the 2016 AGO show devoted to Group member Lawren Harris that was co-curated by comedian Steve Martin and toured in the U.S.

The painting was not bid on during the auction, and the price it finally sold for was “for an amount in the region of the work’s auction estimate,” Sotheby’s said.

Because the sale is private and unverifiable it does not represent a new record for Carr, but Mr. Warren, the art dealer, said the price was higher than the auction record set when Mr. Audain paid $3.39-million for The Crazy Stair in 2013. 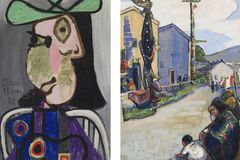 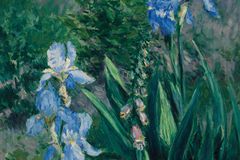