Do you remember the opening scene from Raiders of the Lost Ark? It’s when Indiana Jones tries to swipe the golden idol from atop its temple altar by trading it for a bag of sand. This story is its moral sequel.

In September, 2019, Winnipeg-based artist Divya Mehra was in Regina. She had been invited there for a site visit at the MacKenzie Art Gallery in preparation for an exhibition featuring some of her work that was to open in the springtime.

“I was interested in learning more about the space, its history and its collection,” the artists says. So she had dedicated some time for research. Her attention was caught by a printed item discussing the gallery’s namesake, Norman MacKenzie – a prominent lawyer, prolific traveller and buff of art and antiquities – and his collection, whose 1936 bequest served as the inception of the museum. It mentioned travel to India, where MacKenzie had acquired a statue of the Hindu god Vishnu. The gallery had set Mehra up on one of its collections database computers, so she performed a search for the sculpture.

“Vishnu is a male deity,” Mehra explains, “and there are certain signifiers in terms of the way Vishnu would be depicted, whether in painting or in sculptural form.” The image that appeared on the screen, however, did not resemble Vishnu. It displayed a female body. The artist asked for a closer look and was brought downstairs to the vault where the statue was kept. What arose from the drawer was a small stone figure, four inches by seven inches, weighing a couple pounds. There appeared to be some damage at its base and rear, she says. As she had discerned from its photo, the figure had breasts and was adorned, unlike Vishnu. She wasn’t sure which deity it represented, but she was certain it wasn’t him. The statue had been misidentified.

After the discovery, head curator Timothy Long led Mehra to a large leather-bound book titled Idols: Hindustan, Thibet, Buhrma, China, Congo. The volume is one in a series, collecting the notes and letters of MacKenzie regarding the objects of his collection. The artist found the pages corresponding to the sculpture. On a trip down the Ganges River in 1913, the transcript said, MacKenzie’s party stopped at a shrine in the city of Benares, where he noticed an idol of the sort he wanted for his collection. He engaged a local to take the idol for him and it was later delivered to his hotel. By MacKenzie’s own admission, the statue that was sitting downstairs in the museum vault had been stolen from an active shrine.

“It wasn’t surprising,” Mehra says. “Because the provenance of works often found in institutional ‘collections’ is insidious and violent.”

She went immediately to director of programs John Hampton, who was also the curator for her upcoming exhibition. They had to do something, Mehra said, and Hampton agreed. Mehra proposed returning the idol to India. Deaccessioning – the process whereby a museum permanently removes an object from its collection – is typically practised to eliminate redundancies, works of inferior quality or otherwise low-priority articles with the resulting sales used to fund new acquisitions. It is rarely done, and even less so for the repatriation of stolen art. In its 60-some years, the MacKenzie Art Gallery had never deaccessioned a work. But the pair resolved that the return of the idol would be their project.

Hampton set to work on the institutional procedures. There would be many checkpoints to pass. It required approval, he explains, from the museum director, its permanent collection advisory committee, the board of directors, the university librarian and the whole infrastructure at the University of Regina. “And then,” he says, “India would have to want it back.” (The MacKenzie Art Gallery became independent from the university in 1990, but manages and cares for the Norman MacKenzie Collection, though it belongs still to the U of R.) The MacKenzie issued a formal recommendation for the university to deaccession and repatriate the work, and the university quickly agreed, Hampton says. “They saw that it was an ethical imperative to them as well.”

Meanwhile, Mehra had solicited the help of Siddhartha V. Shah, curator of South Asian art at the Peabody Essex Museum, to identify the idol. The stone sculpture wasn’t particularly striking or refined, he says, but it had “a lovely feel to it. Simple but significant.” From its image, Shah agreed it was not Vishnu. She – not he – was holding a ladle and a bowl of kheer (rice pudding). These are the iconography of Annapurna, the goddess of nourishment, and he determined that this was whom the idol depicted.

Mehra’s MacKenzie exhibition, From India to Canada and Back to India (There is nothing I can possess which you cannot take away), which ran until last month, featured a selection of new and recent artwork. Her adventures inside the museum vault took the form of a new piece: At one edge of the gallery space sat a cylindrical plinth, overtaken by moss, much like the altar from which Indy had raided his golden idol. On this, Mehra, too, placed a small leather bag – hers filled with 2.4 pounds of sand. It was the precise weight of the Annapurna statue she was attempting to remove. (The artist’s connections to the fictional treasure hunter were, in fact, more real than metaphorical; Norman MacKenzie’s papers include dealings with Edgar James Banks, the antiquarian and archeologist said to have been an inspiration for the Jones character.)

Mehra felt she was acting as the antithesis of the film “hero” – rather than stealing it away, she was a Hindu woman trying to return the idol to its home.

Once the exhibition opened and her project received some press, Mehra was contacted by the High Commissioner of India in Britain. He wanted to know how his office could help. Soon after, the Indian High Commission in Ottawa became involved. India was interested in the return of the object. Then, this past November, not much longer than a year after Mehra first proposed its return, the statue of Annapurna was repatriated to India in a virtual ceremony.

“Divya lifted this sculpture,” Hampton says, “and removed it from our care, then swapped it with a bag of sand as if she would disarm all of the colonial booby traps that prevent this type of repatriation from happening. And it worked. Indiana Jones’s bag of sand didn’t work, but Divya’s did.”

News of the repatriation was covered widely in Indian media and Indian PM Narendra Modi mentioned it during his monthly radio address. The latter point is both surreal and disappointing to Mehra. “You have to ask,” she says, “is it a mere coincidence or highly problematic that news of the repatriation of a stolen statue of the Hindu Goddess of Nourishment is being foregrounded by the government, while that same government is vilifying farmers, who nourish the entire world, for peacefully protesting for their livelihoods?”

The idol is now in Ottawa and the High Commission says it will arrive in Delhi later this month, where the Archeological Survey of India will conduct a physical and historical assessment to determine where the object will ultimately live. It is Mehra’s hope that Annapurna is returned to the Benares temple she was stolen from.

Although it will be difficult to identify the exact shrine, she says, MacKenzie’s papers mention a photograph that pictures him and the individual who would steal the statue on his behalf arranging the deal while standing near a burning ghat (cremation ground). Neither the artist nor curator could find the snapshot, but it suggests the evidence could exist.

As for Mehra’s bag of sand, the MacKenzie Art Gallery has acquired the piece. Now, if you were to search the statue’s identification number in the museum’s collection database, you’d be directed to the bag of sand. In the vault, the pouch will live inside the same moulded cradle inside the same drawer where the idol once did.

“It will act as a placeholder,” Hampton says, “hopefully marking a turning point in the collection as the very first deaccession in its history and sparking what I hope is momentum into the future.”

Hampton, who has since become executive director and CEO at the MacKenzie, says his institution is in the midst of a review of all its collections. “We have made a public commitment that we will identify objects that we have no moral right to ownership over and we will work to return those objects or place them where they belong.”

The problem of artifacts acquired unethically isn’t particular to his museum, though.

“It is likely true of most museum collections,” Hampton says. It is fitting, then, that Mehra’s bag of sand is actually an editioned artwork. She has nine more, ready to be filled with as much sand as each needs. The artist is only waiting for more museums to invite her into their vaults. 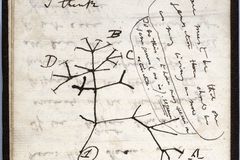 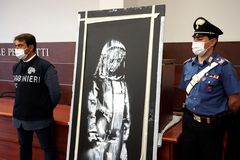 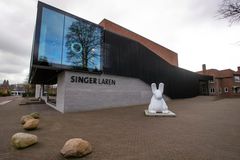