When you make a project of collecting scrap plastic, it’s not long before you’re drowning in the stuff; if you look for waste, artist Kelly Jazvac knows, you find it everywhere.

For the past nine years, the Montreal-based sculptor has piled her studio with vinyl offcuts and errors, deinstalled billboards and used-up banners. Preparing Lamina Stamina, a solo exhibition at Museum London, she wants to communicate the size of that stash, so she’s applied swatches of the salvaged vinyl around the baseboards of a large gallery space, arranged chromatically like a colour wheel. Plastic waste is so plentiful, the display suggests, it comes in all shades of the rainbow.

Heading off material destined for the landfill, Jazvac repositions it as objects that deserve not mindless consumption, but close consideration. Her artwork asks: What does disposability really entail? Nothing disappears just because it left us in a blue bin or a trash bag or a dumpster. In sculpture and film, she visualizes the ubiquity of plastic pollution, observable at every scale – from sheets of PVC broad enough to dress a skyscraper to particle-sized microplastics in Lake Ontario. She approaches the issue with the rigour and care of a scientist. She works with them regularly. When their fields are often divorced, she says that to solve this mess, it’s going to take collaboration between disciplines. She wants more voices engaged in the same conversation. It’s a leitmotif of the exhibition.

Jazvac embarked on her first art-science project in 2013. Working with an oceanographer and a geologist, they visited an intensely polluted beach on Hawaii’s Big Island. “In terms of ocean currents, it’s a highway from the North Pacific Gyre,” she explains. The beach isn’t made of sand; it’s made mostly of tiny bits of plastic. There, they observed what they named “plastiglomerate” – a type of stone made from molten plastic debris and natural sediment such as sand, wood, rock and shell. It is the product of beach bonfires. The trash melts, gains density, becomes buried, then enters the rock record. “A geologist in the future might take a core sample and see a plastic strata representing us now.”

She became interested in vinyl first for its desirable qualities: It’s malleable, shiny and inexpensive to produce. It makes an amenable printing substrate. That’s why it’s everywhere. “It’s also one of the most dangerous plastic products,” she says. Its composition includes chlorine and phthalates, carcinogenic chemicals known to be endocrine disruptors. These leach into the ground and water table as the vinyl sits in garbage dumps.

Hung from one wall, a series of sculptures – quasi-pornographic arrangements made from body parts clipped out of advertisements – emphasizes the seductive character of the material. Another group of vinyl hangings, inspired by various animal forms, remembers the consequences of our plastic habit. Pizzly, a massive, foreboding, vaguely bearskin rug-shaped piece, is named for the grizzly-polar bear hybrid expected to become more common as the latter is forced south. It’s cobbled entirely from sections of black ads. Jazvac remembers each one – that was a Seinfeld ad, there’s a lawyer’s office, that moiré bit was for the Vancouver Olympics.

Through a curtain cut from one of those Apple “Shot on iPhone 6” banners, Lamina Stamina spirits visitors from the scads of vinyl refuse to video and photo works that ask roughly, “So now what?” A grouping of photographs hung at a child’s eye level documents a 2017 artist-in-residence project that Jazvac conducted at the University of Toronto’s Dr. Eric Jackman Institute of Child Study. She invited students there to bring in a possession they once loved but no longer wanted. They were then tasked with transforming the item, using salvaged materials and deadstock art supplies, into something they would want again. It was a miniature exercise in creative reuse, an imperative in any larger solution to plastic waste. “It’s going to take some openness,” she says, “and some creative problem-solving.”

Jazvac points out a 2014 work called Anthropophotogenic. Laminated in plastic and suspended from a trade show banner stand, there’s the image of a model tripping on the excess material of her gown. It’s cropped tight around the dress to look like a mineral or some geologic form. It represents a moment the artist also caught herself mid-stumble. “That’s the last plastic work I ever printed,” she says. If her art is about the dangers of plastic pollution, it follows that her art-making practices ought to be sustainable. She is always trying to shrink her ecological footprint as an artist.

That ethic continues through the way she makes exhibitions, too. Works are affixed to the wall, for example, using velcro strips stapled in place so they can be reused. Instead of typical adhesive lettering, she points out, the wall text is hand-stencilled with pencil. “I don’t want to make any new vinyl,” Jazvac reasons. “I’m an artist – I can make anything I want. I should be making some new rules then.” 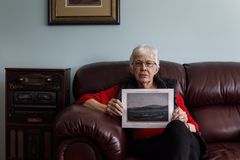 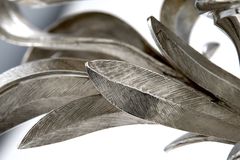 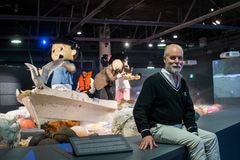