One problem is that all this comes with a big price tag. The company’s proposed deal asks governments to give up $500-million in real estate value to make it work.

I’ve come to that number after consulting real estate industry sources and unpacking some figures that Sidewalk has made public. This raises some serious questions. How much of a subsidy should governments be offering to the Sidewalk Toronto project? And how will that investment serve the public good?

The company’s proposal for Toronto is complicated and, so far, poorly defined. But in part, it’s a real estate development involving a big swath of land that is mostly in public ownership.

Back in 2017, the company answered an invitation from the public corporation Waterfront Toronto, which oversees the redevelopment of Toronto’s Port Lands, to develop a specific 12-acre site dubbed Quayside, and also to be an “innovation partner” for a larger area.

Sidewalk also proposes to develop a second site, a nearby 20-acre plot, which it dubs Villiers West. That’s gutsy, because this land is not currently for sale and it is perhaps the best real estate on the entire Toronto waterfront – with spectacular skyline views and a big park next door.

All this land, on the lake at the doorstep of downtown Toronto, is worth a lot of money. Sidewalk wants a large portion of that value to subsidize its project.

The Quayside and Villiers West sites contain roughly 5.8-million square feet of development potential. If that was sold for the highest possible price, approved for predominantly high-end housing developments, it could be worth $1.25-billion.

That scenario is only theoretical. Waterfront Toronto always sells land to developers at a discount in return for a promise to deliver on public goods – such as affordable housing – that will reduce the profitability of its project.

For all its developments, Waterfront requires that 20 per cent of residential units be affordable housing. And, in the case of Quayside, it wants the new development to reflect “urban innovation.” This will lower the price of the land.

By how much? In the current policy environment, the two sites should be worth approximately $1-billion combined. And it appears Sidewalk wants to pay just $500-million for both sites.

In January, real estate consulting firm MacKenzie Ray Heron & Edwardh conducted an appraisal of the Quayside site. (Its client was the developer Julie Di Lorenzo, a former Waterfront board member and vocal critic of Sidewalk.) Its report, which I have seen, assesses the value of the Quayside site alone at $570-million. That accounts for the affordable housing requirement.

But the buildings Sidewalk proposes at Quayside are smaller than would be allowed by the zoning now in place; their plan only uses 2.7 million square feet of the allowed density, leaving 400,000 square feet unused. This is leaving money on the table. It’s extraordinarily unusual.

Pino Di Mascio, Sidewalk’s director of planning, explained that the project’s architectural and urban-design aspects would be substantially better than those that would be provided by a more typical development. “We’re trying not to apply the conventional developer lens,” he said.

The Villiers West site is harder to assess because it does not yet have development approval from the city. Sidewalk proposes to build approximately 2.75-million square feet of structures here, predominantly office space.

In determining its value, I spoke to three real estate industry sources, all with experience in land valuation and large-scale development. None of them agreed to speak on the record, for fear of jeopardizing potential business relationships with Sidewalk. Their consensus was that value of this site would be approximately $400-million, placing the total land value for Sidewalk’s proposed development at nearly $1-billion.

Here, too, Sidewalk wants to change the planning approach that’s in place, building more office space and less housing. This also lowers the value of the land, and for what? It’s not clear to me that a highly secure tech-company office is a good thing in this particular neighbourhood. City planners and consultants have envisioned a different mix of uses.

Sidewalk will not publicly state its offer, and Waterfront Toronto won’t comment on specifics as its negotiations with Sidewalk continue. But there are hints in the 1500-page Master Innovation and Development Plan, released in June.

With respect to Quayside and Villiers West, the MIDP allots a combined $1.09-billion value for the land and “soft costs,” an industry term that includes taxes and consultant fees. Two of my development-industry sources estimated that such “soft costs,” for a project of this scale would be $570-million to $600-million. That implies that Sidewalk wants to pay approximately $500-million for the land.

Once you look at other details in the MIDP, you see Sidewalk seeking other pots of public money. Its proposal calls for “performance payments” if certain goals of the project are reached. And it suggests that instead of paying all of the city’s usual (and very high) development charges, it directs some of those funds toward the “digital infrastructure” and features of its neighbourhood’s public space. In other words, largely to its own benefit. But these requests at least are in the open. The land cost is a big black hole in the plan.

Not surprisingly, Sidewalk disputes my analysis, without citing specific numbers of its own. The MIDP makes a convoluted argument, which Sidewalk spokesperson Keerthana Rang summarizes as follows: ”We expect the deal would take into account the affordability, sustainability, job creation and other goals laid out by Waterfront Toronto,” she said. “This is similar to other affordable housing deals that the city enters into with developers.”

In other words, Sidewalk wants to get valuable land at a discount in exchange for delivering various public goods that it says Waterfront Toronto has asked for. This is fair – to a degree.

But what exactly are those goods? And what are they worth? These are the key questions here. Back in 2017, the then-chief executive officer of Waterfront Toronto, William Fleissig, articulated a vision for Quayside as a site for innovation. The idea was that Quayside would help reshape Toronto as a global hub for city-related tech. Now, Sidewalk is promising to do that, making big claims about the economic development that its efforts will bring.

But the Toronto waterfront is already being reshaped right now. What is currently underused land is going to be a riverside and lakeside neighbourhood, full of parks and ripe for development. With or without Sidewalk, things are happening. Its promises should be seen in this context.

Andrew Tumilty, a spokesperson for Waterfront Toronto, said that “land value is a key issue" in the agency’s discussions with Sidewalk. “While we are working to evaluate if the Quayside proposal has viable solutions for several of Toronto’s pressing challenges, any agreement will need to make financial sense,” he said in an e-mail. “The waterfront belongs to everyone, and Waterfront Toronto is committed to preserving its value for generations to come.”

Good. And that means crunching the numbers and asking hard questions about what’s being bought and sold. 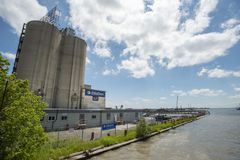