That’s it? The development plan for a Toronto neighbourhood that Sidewalk Labs has just released is 1,524 pages, and yet it is amazingly thin on substance. Twenty months since the Google sister company came to town, basic questions about what it aims to do, and how, remain unanswered. Still.

The new proposal is missing detail on two crucial issues. One: How would technology really make city life better and more affordable? And two: What exactly is Sidewalk hoping to acquire here, and what does Sidewalk hope to do with it?

What is not clear is how all this will radically increase the quality of life in cities, as Sidewalk claims. Their math still does not add up. Mass timber, a novel construction system, is cited as a factor that will contribute to affordability. But it’s expensive, not cheap. And it’s not even permitted yet for high-rise buildings. The “dynamic streets” and waste-management infrastructure that Sidewalk wants to create – again, likely expensive; again, rule-breaking.

But anyway: If this is a sales pitch, what is Sidewalk selling? The company wants to develop real estate, build a new Google Canada headquarters, become a bank for public infrastructure and then provide some services and infrastructure to a larger area of the waterfront.

Figuring out that much from the development plan takes work, because Sidewalk officials prefer to talk in platitudes. “We’re showing how cities can integrate physical, digital and policy innovation” to improve quality of life, chief executive Dan Doctoroff said on Monday.

It’s remarkable that, after 20 months of public presentations, lobbying and “consultations” by the company – a process that gave it access to public officials that other real estate companies never get – I still don’t know, really, what Mr. Doctoroff means.

Which goes to a deeper question: Who is Sidewalk Labs, and who does it think it is? The company’s officials often talk about what “they” have accomplished. Mr. Doctoroff, in particular – a former New York deputy mayor – cites his own experience making things happen in that city.

In presentation material this week, the company cited its “sensitivity to the complexity of urban issues.” Really.

Then why is the company going far beyond the terms of the request for proposals that brought it to town? Why is it trying to propose financing arrangements to fund transit that are not currently permitted? Why does it talk blithely about redesigning streets in a city where this has proven incredibly difficult?

And that’s not even opening the question of what forms of data would be collected in these new Sidewalk-partnered neighbourhoods, or how those data would be commercially deployed. The company has long identified “tech” as one of its three business streams, and that seems to be the heart of what it’s doing. Questions of data privacy and of the economic benefits of neighbourhood-scale data are exceptionally difficult to answer here.

But I had expected the other aspects of this development proposal to be clear. They are not, either economically or technically. It’s hard even to figure out what the company proposes to pay for the land.

One small illustration. The company’s consultants have come up with some dramatic architecture and landscape architecture ideas for the proposed neighbourhood. It’s easy to imagine that these – including flourishes of mass timber – will be part of the largesse that Sidewalk Labs brings to the area.

But if you look at the fine print, you find that developers in the new Sidewalk neighbourhood would pay for “infrastructure” rather than the usual city development charges on new buildings. That “infrastructure” includes things such as “digital infrastructure” and “signature features like structural canopies and floating elements.”

All those cool timber doodads in the architects’ drawings? Sidewalk wants you to pay for them. Perhaps this is not a metaphor for the larger initiative. Perhaps it is. The process of assessment by Waterfront Toronto will involve a thousand questions such as this and much bigger ones, and then, in the end, we will see what Sidewalk wants to build, and what gets built. 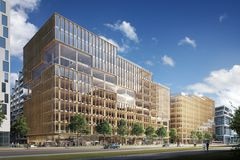 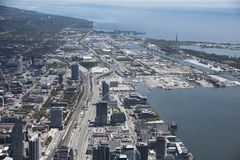