Last year, at the age of 58, Julian Dix fatefully put aside his 30-year career as a goldsmith to paint full time. He felt that if he didn’t commit to art, it might never happen.

So the jewellery maker, who began painting after receiving an easel one Christmas more than a dozen years ago, enrolled in a course this past September at the local university where he lives in Surrey, B.C. There, he produced fervently, including a series he calls his “best work yet.” But at the end of the semester, when Dix went to retrieve the artwork from the painting racks in his classroom at Kwantlen Polytechnic University, he discovered all 13 of his canvases had gone missing. And, curiously, only his work, none of his classmates’, was missing.

First, he went to his instructor, Robert Gelineau, to ask whether the paintings had been moved somewhere for safekeeping. Then, after the instructor confirmed they hadn’t been misplaced or garbaged mistakenly, Dix thought up other reasons the paintings might have vanished: A fellow student – innocently or not – took his artwork to reuse the canvases; someone liked the paintings and saw the opportunity to grab them; it’s also conceivable they were the target of a jealous or embittered classmate.

Or perhaps – and this is only conjecture, Dix recognizes – the paintings were stolen because of his famous surname. Although he says he never advertised to his class, Julian Dix is the grandson of Otto Dix, the renowned German Expressionist painter whose artwork lives in some of the world’s most hallowed museum collections. Otto’s paintings were included in Hitler’s infamous Entartete Kunst exhibition, which denounced so-called “degenerate art.” Otto’s son Ursus, Julian’s father, moved across the Atlantic, taking a job as a conservator at the National Gallery of Canada.

While an Otto Dix has sold for as much as $8-million, the heist of paintings by Dix the Younger won’t make its perpetrators rich. The most Julian Dix has sold a painting for is $2,000. Value in the art market might be determined peculiarly, but it is not conferred by bloodline. Not generally, at least.

For Dix, though, the works are worth an inestimable value – but of a different sort. His wife, Victoria, passed away from cancer in March, 2019. It was she who had encouraged him down this path, to enroll in classes and commit to his artwork. She’d told him: “Go and paint; it’s your turn now.” And the artist felt a powerful connection to her during the making of these lost paintings. The work, he says, represented her permission, it had been a lifeline to her, as well as his first steps into a new life after she’d gone. Discovering that the paintings were missing was “like losing Victoria all over again,” he says.

He’s most proud of a series of four large panels titled Love and Loss. It’s these he’s also most heartbroken to be missing. One shows the sunrise over a green valley – a pleasant if overplayed picture – but the idyll is disordered by a pedestal and vase, highly realistic, sat before the landscape, suggesting a separate dimension. Another depicts a gallery wall hung with a painting of what looks like the same room. Or is it a mirror? An empty plinth stands dead centre, like a viewer staring into the frame and puzzling out the scene. In each painting across the series, there’s a single object inserted into a space that appears idealized or otherwise askew.

“I really do believe in the gestalt in painting,” Dix says. “Things come out of you that you don’t intend.” The artist remembers a conversation with another student when he told him about his wife’s passing. The classmate said: “Aha! I understand now. I thought there was something lonely, but always hopeful in your paintings.” It occurred to Dix then that what he was composing were, in essence, allegories of loss. “There is a sense,” he says, “of being singular and alone and looking out into a future.”

Not only are these some of his most technically accomplished works, they also represent an intensely intimate narrative. That’s why it’s so important to Dix that they’re recovered. There is certainly a precedent of thefts from art schools. There are also a number of examples of relatives of famous artists – including Picasso, Renoir, Matisse, Miro and Gauguin – whose children, grandchildren or great-grandchildren also became visual artists. What’s not widely documented are any instances of those younger artist-relatives befallen by theft because of the connection.

Dix’s instructor, Gelineau, doesn’t believe that’s the motive for whoever removed the Dix paintings. “I have enough trouble getting students to know who any artist is,” he says. Van Gogh they might recognize, but Otto Dix is less likely. It is curious, however, that only Dix’s art was taken. All of it, too.

The RCMP has reviewed footage from the school’s security cameras, which shows two persons of interest – a male and a female, Dix says – loading a number of large canvases into a white station wagon over a 25-minute period between when the paintings were last seen in the classroom and when Dix discovered them missing. But police say the video is insufficient to identify the suspects or their vehicle.

Meanwhile, Dix and his friends have been circulating images of the stolen artwork, e-mailing galleries throughout the province to be on the lookout, and scouring online marketplaces in case they surface there. He says that if the paintings were mysteriously returned, there would be no repercussions. “I’m not looking for blood, I’m looking for oil.”

Were the paintings recovered, the artist thought he might throw a party – a four-painting exhibition. “They would not be for sale,” Dix says. “I have four boys. I have four paintings. Each of them would receive a painting as a memorial of a precious woman. A lovely ending.”

Until then, the search for the lost Dix paintings continues. 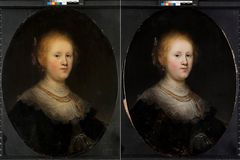 All 12 of Raphael’s tapestries return to Sistine Chapel for first time in centuries
Subscriber content
February 17, 2020 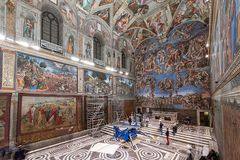 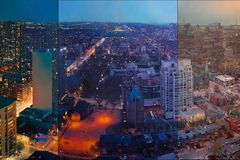