An exhibition of a major, living international artist’s work was announced in Toronto on Monday, at a press conference held by people other than the artist himself. Or herself, as the case may be.

The touring exhibit The Art of Banksy, which includes 80 original pieces created by the anonymous British street artist and satirical scamp known as Banksy, will make its North American premiere on June 13 at a warehouse on Toronto’s Sterling Road, a fledgling hotbed of contemporary art and other scene-making entrepreneurialism.

Running until July 11, the Art of Banksy will be stocked by privately owned pieces on loan from international collectors. Included are original paintings, sculptures, installations and screen prints, along with support material such as photographs of Banksy’s street-art shenanigans and shots of the obscured artist in early-career action. Those documentative archives were shot by Steve Lazarides, a British gallery owner who once worked as the artist’s agent and who is the curator of The Arts of Banksy globetrotting show.

“I want this to go to as many cities as possible, to get [Banksy’s] message out there,” Mr. Lazarides told The Globe and Mail during an exclusive tour of the exhibit venue. He described the artist’s philosophy as a “very simplistic, left-wing quasi-political” creed. “[Banksy is] trying to make the world a better place.“

Some 50,000 tickets will go on sale to the public on Saturday for an exhibition that in slightly altered forms has previously been mounted in Melbourne, Amsterdam, Tel Aviv and Auckland. The shows are not authorized by the artist. “This isn’t a Banksy show,” explained Mr. Lazarides, who hasn’t spoken with the artist for years after a falling out between the two. “It’s a show of Banksy’s artwork.”

Toronto audiences will see such works as the Balloon Girl (a 2002 mural by depicting a young girl letting go of a red heart-shaped balloon) and a seven-metre-high stained-glass-window depiction that hasn’t been seen in public for years.

Athens and Stockholm were in the running to host the show, but the writing was on the wall for those cities after a pitch from Toronto’s Starvox Entertainment wowed co-promoter Live Nation Entertainment. “It was a no-brainer,” Michel Boersma, vice-president of Live Nation’s family entertainment and theatre division, told The Globe. “I think the audiences here are very open and thirsty for this kind of thing.”

This “kind of thing” is a significant exhibit, to which organizers aim to attract city dwellers and tourists with the studio work of an artist known for politically subversive images and anti-establishment slogans created on urban surfaces from London to the Middle East to Toronto.

In May, 2010, just a month before Toronto hosted the Group of 20 Summit, seven pieces purportedly by Banksy unexpectedly appeared downtown. What was subversive art to some was seen as defacement of property by others. Most of the images were painted over, but a couple have been preserved.

The property on Sterling Road was originally built in 1925 as a munitions factory.

The postindustrial enclave in the city’s Junction Triangle neighbourhood is the new home of the Museum of Contemporary Art Toronto Canada.

Neighbours include Henderson Brewing, the House of Anansi Press and the Drake Commissary, a bakery and eatery owned and operated by the Drake Hotel in a former condiment factory.

“This is perfect,” said Mr. Lazarides, gazing at the raw, dusty space that will temporarily be transformed with a series of rooms, a bar, a performance space and, naturally, a gift shop. “It reminds me of the squats we used to use when we first started.”

But the neighbourhood is no longer home to squatters. The art museums and blockbuster exhibits are moving in, pushing rents and leasing costs high and the artists out. The irony would not be lost on Banksy.

Editor’s note: An earlier version of this story said the exhibition was announced on Tuesday. In fact, it was Monday. This version has been corrected. Book Review
Banksy: Still enigmatic after all these years (and this biography)
February 15, 2013 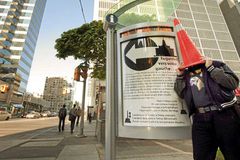 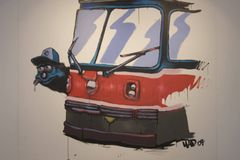