“Underneath, it’s very quiet and dour,” says John Patkau. “But when the light hits it a certain way, it shimmers.” Mr. Patkau and his wife and fellow architect, Patricia, are walking around their latest project, the Polygon Gallery in North Vancouver. And as they’re talking about the building, the sun comes out from behind the clouds; the rays coax from the gallery’s steel and aluminum facades a subtle ripple. “It acts with the light,” Ms. Patkau says of the building. “It changes dramatically, depending on when and where you’re looking at it.”

You could say the same about Patkau Architects. Long based in Vancouver, the couple have held a place among Canada’s most accomplished architects, recognized by international critics and awarded a series of major buildings including Montreal’s Grande Bibliothèque. And yet, even in their adopted hometown, they remain in the shadows. Nobody better represents the tensions in Canadian architecture between greatness and commerce, between public triumph and the quiet private life.

The Polygon Gallery represents a Vancouver star turn, following the 2016 completion of the Audain Art Museum in Whistler. The two buildings are their most significant in the province. The Audain, a private museum that houses the collection of developer Michael Audain, has deservedly won a string of international awards. The Polygon building, which opened to the public Nov. 18, is a subtle masterpiece in itself.

The Polygon Gallery contains what used to be Presentation House Gallery, a small-but-mighty institution at the centre of Vancouver’s photography and media-arts scene. The $18-million, 25,000-square-foot building is organized in a simple scheme: lobby, bar, gift shop and rented retail spaces downstairs, with galleries and a flexible event space upstairs. Director Reid Shier says the architects did “a superhuman job,” cramming the institution’s many requirements into the space while keeping the ground level transparent.

But while the building works on a prosaic level, it is also subtly poetic. As you approach the Lonsdale Quay site on the SeaBus from downtown Vancouver, the building reveals its jagged profile and shimmering surfaces: a sort of abstracted version of the sheds that surround it. Here, on what had been a working waterfront – it replaced a building used for tugboat maintenance – Shier had wanted “a tough building, a working gallery,” says John Patkau.

The architects delivered on that directive through a set of not-too-obvious references and moves. For one, the skylights in the upper galleries follow a sawtooth pattern, long standard in industrial buildings. Below that, a set of steel I-beams run across the spaces, implying a sort of ceiling, from which the power conduits and lights are hung. It’s not a white box, but it is unfussy and beautiful, managing to evoke a manufactory roughness while complementing a Stan Douglas photograph.

Then there are the façades, whose outer layer is made of fish-mouth aluminum grating, often used for marine stairs and gangplanks. “That has a literal reference to the shipbuilding industry in the area,” Shier says, “but it was a really creative way of taking something off the shelf and using it in a nuanced way.”

Context, nuance, subtlety: These are the very qualities that John and Patricia Patkau are known for.

When the Patkaus moved from Edmonton to Vancouver in 1983, they soon built themselves a house in West Vancouver. In this, they followed other B.C. modernists in building carefully considered private houses. They became closely identified with the idea of “critical regionalism,” an architecture that resisted the two prior fashions: The universal tendencies of corporate modernism and also the self-conscious historical quotations of postmodern architecture. Their buildings have responded to the local climate, to hilly sites and – with two important elementary schools – the post-and-beam construction traditional to B.C. First Nations.

“Each project is specifically tailored to its circumstances,” the critic Andrew Gruft wrote in the 1990s, and, “entangled with its particular conditions and idiosyncrasies, works to counter the universal banality of mass culture.” This is site-specific and bespoke building.

Perhaps not surprisingly, the Patkaus are little-known in the province – “I would say we’re not known at all,” John Patkau says. Partly, he suggests, this is because they’ve done much of their most important work outside of B.C. The Clay and Glass Gallery in Waterloo, Ont., helped make their career, and arguably their most important work is the competition-winning Grande Bibliothèque, which is spectacular. In Toronto, they built the fine visitors’ centre at Fort York, and co-designed the Goldring Centre for High-Performance Sport, an ambitious structure at the University of Toronto.

This trend continues. They are now working on a tall wood tower to add onto the Goldring building, with colleagues MacLennan Jaunkalns Miller Architects (MJMA). And they are among four teams competing to design the Arbour, a 12-storey-tall wood building at George Brown College in Toronto. They have been working for years on the new Thunder Bay Art Gallery.

Their continued pursuit of detailed, site-specific architecture makes it hard to work in B.C. “Vancouver is a very strange place,” John Patkau says, “where the [architecture] profession has become a single-building service profession. We build condos, and that’s what we do – not much more.”

Even the Patkaus, as Patricia points out, “have a developer as our client” – Michael Audain, who is also the founder of Polygon Homes, which donated $4-million to the North Vancouver gallery.

Personally, John and Patricia are, without doubt, private people. Both are lean and long-limbed; each of them moves with a bird-like economy and speaks slowly and softly. “We’ve never been good at promoting ourselves,” Patricia says. “I go to events and see other people working the crowd; I wish I could do that. We just like to go home.”

The couple and their office of 17 architects has long resisted the machinery of public relations. Despite winning a dozen Governor General’s Medals and being recognized by foreign critics and colleagues – the Audain won awards this year from both the American Institute of Architects and the Royal Institute of British Architects – they remain relatively obscure.

Why? The culture of Canadian architecture, which the Patkaus absorbed as students at the University of Manitoba, places art and business in opposition. It’s an odd and self-defeating quality. But Patricia, who taught for more than a decade at the University of British Columbia, sees this changing. “The younger architects have an ability that our generation didn’t have, and that is to sell themselves,” she says. “John and I have never known how to do that; we just sit and say, ‘I hope somebody comes in the door with some work.’ But the young architects – I think they need to operate that way today. At times I find it disgusting, but it doesn’t have to be.”

The Patkaus have decidedly chosen art over business. In recent years, they’ve pursued research, creating sculptural forms that allow them to explore the inherent qualities of steel or aluminum or wood. This work, documented in the 2017 book Material Operations, has even led to John Patkau exhibiting as a sculptor at the local Gallery Jones.

So how do you fit sculptural abstraction together with an architecture of place? At the Polygon, they began by trying to design façades made of crumpled sheet steel. This, Shier says, proved too complex and expensive. The final result of two layers, one fine and one rough, is a beautiful compromise.

“As you’re walking from the SeaBus or the market, the building turns toward you and addresses you,” John Patkau says. “The building sits quietly, but it does speak to you.”

University of Montreal’s hospital centre puts patients first, but it faces obstacles with its design
March 16, 2018 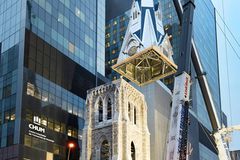 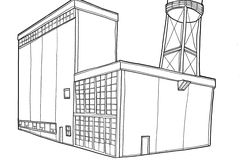 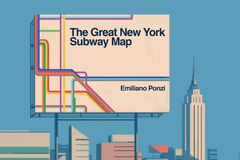