The landscape projects, officially opening Wednesday, open up the country’s most-visited museum to the city around it. And they’re part of an ongoing renovation of the museum that soon could touch the building itself.

The new spaces sit alongside the museum’s controversial Daniel Libeskind-designed wing. The restrained design, led by Siamak Hariri of Hariri Pontarini Architects, meets the metallic shards of the Michael Lee-Chin Crystal wing with a new, soothing vocabulary: low planters and benches in beige Algonquin limestone and a new set of trees surrounded by largely native plantings.

The Reed Family Plaza, as one area is called, faces busy Bloor Street West with “a sense of welcome,” said Josh Basseches, the museum’s director, during a tour on Monday. “It’s a symbol of engagement with the city.”

To the east, the Helga and Mike Schmidt Performance Terrace uses the same materials to define a new raised plaza, fully accessible, which can accommodate talks and performances. Behind it stands the museum’s original wing, a Venetian-themed concoction designed by Frank Darling in 1914. Its yellow brick and terra cotta have never looked better.

And the terrace has good proportions and good acoustics. “We hope this will become a really important and wonderful public space that can accommodate all sorts of activity,” Hariri said.

The terrace and plaza are the latest phase in what the museum calls the Welcome Project. This began with a reopening in 2017 of the museum’s former main entrance, and then the opening of the ROM’s Indigenous Gallery the next year.

On Monday, Basseches confirmed to me that the ROM is considering further changes to the building itself. These include a renovation of the museum’s theatre and a new entrance for it; a new restaurant at street level; “a new events and programming space along Philosopher’s Walk,” Basseches said, “and enhancing the Bloor Street entry experience.”

The director cautioned that these planned projects are not yet certain and will depend on philanthropic contributions. Hariri and his office are engaged in design work for the museum.

Meanwhile, the new plaza and terrace represent a welcome outward turn for the institution. Basseches, in talking about the project, describes qualities that are canonical in creating urban squares. A sense of enclosure, but not too much – in this case defined by the museum’s walls and a row of beeches. A mixture of sun and shade. Lots of places to sit.

The fact that these things were ever absent, from a plaza in front of one of the most visited buildings in the country, is somewhat shocking. After Libeskind’s high-profile addition a decade ago, the plaza around the museum “was somewhat barren,” Basseches admits.

Indeed it was. Just next to the new plaza, a group of polished black granite benches, designed by Libeskind, remain in place for now. They are crowded with people, but acutely uncomfortable. (The prominent urban designer Jan Gehl gave a talk about public space in Toronto a few years ago, and offered his take on the ROM plaza: “This is crap.”)

The new plaza and terrace benefit hugely from an infusion of green. Planting beds are filled with a largely local selection of shrubs, to “demonstrate what biodiversity looks like,” Basseches says, “and not just have a garden that looks good.” Selected by landscape architect Ron Holbrook and museum botanist Deborah Metsger, there are witch hazel, Christmas ferns, Canada anemones and bearberry.

The trees, selected by landscape architect Michael Ormston-Holloway of the Planning Partnership, include some rows of non-native beech trees in a formal arrangement – but also cutleaf staghorn sumac, a species whose red berries and spindly frames are part of the local landscape. They harmonize well with Libeskind’s metallic shards and Hariri’s buttery stone.

The message is one of welcome, serving ROM strategy to become more open, Basseches says. This relates to a broader turn at many cultural institutions: They see themselves not as temples of learning but places for all sorts of social and cultural events – gathering places.

The ROM plans to do just this with an expanded programming effort starting this fall. “We want to avoid any barriers to people’s participation,” Basseches said. “The ROM is committed to being a place for all.” And as of now, it’s a place you can sit down in the shade.

Opinion
If you want to admire the Mona Lisa this summer, a good reproduction is the way to go
August 17, 2019 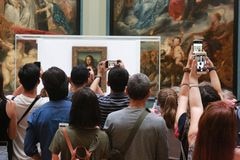 Opinion
Here’s a lesson: When it comes to public school design, Ontario will get what it pays for
Subscriber content
August 15, 2019 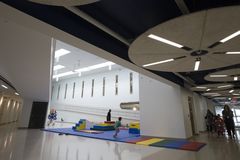