On a very rainy Wednesday in October, dozens of people – I was one of them – were called to Kumugwe, the K’omoks First Nation Bighouse. We were asked to witness a historic event taking place at the traditional community gathering place, located between Courtenay and Comox, B.C: an oral ceremony that was making Canadian legal history. For the first time, a federal Crown Corporation had ratified a legally binding contract through Indigenous traditions; written documents and an oral ceremony were given equal weight in the contract. It is, as the artist who made the work at the centre of the contract said, an agreement that lives in two worlds – in traditional Indigenous ways, but written in “Western contract legalese.”

The event concerned The Witness Blanket, a monumental installation by artist Carey Newman, who is Kwagiulth from the Kwakwaka’wakw Nation and Coast Salish from the Sto:lo Nation. The 12-metre cedar-framed multi-panelled work is a memorial and tribute to residential-school victims and survivors, made with more than 800 items collected from survivors, descendants and sites of former residential schools, churches and other relevant institutions.

The groundbreaking agreement vests legal rights with the artwork itself – not the artist who made it, not the museum where it will now live. The rights belong with The Witness Blanket and the stories it carries.

“I knew that I didn’t want to sell it like a normal transaction; I didn’t want to set a price and negotiate that and deal with copyright issues,” Newman told us, the crackle and pop of the warming fire in the centre of the Bighouse punctuating his words.

A row of chairs facing the fire was set aside for the official witnesses, including the artist’s father, Victor Newman, a residential-school survivor. The chair in the centre was draped in red awaiting its occupant. It would be a bentwood box carved by Newman, presented during a traditional mask dance and bestowed during the ceremony to Canadian Museum for Human Rights president John Young; the legal documents were placed inside the box.

The work does not belong to the museum but is now CMHR’s responsibility. And there is responsibility too for all of us who were there – both as legal witnesses and story-keepers.

“Now there’s a whole bunch more of us who carry that responsibility for making good decisions on behalf of the Blanket and the stories that it carries,” Newman told me after the ceremony.

I first met Newman in 2013. We spent most of the day in the basement studio of his Victoria home, where he showed me artifacts he had been planning to “weave” – he was still figuring out how to do that – onto a large-scale installation he was calling a blanket. There was a doorknob from St. Paul’s school on the Blood Reserve in Alberta, a rock from a sweat lodge at the Lejac Residential School in B.C., an Anglican prayer book written in Inuktitut. But the one that had us both in tears was a small, crumbling shoe he was keeping in a Ziploc bag. It had been found in the woods near where the burned-down Chooutla residential school once stood in Carcross, Yukon. A child’s shoe.

Not quite a year later, we met again in his basement. The blanket had taken shape, and it was a magnificent heartbreaker, with piano keys and hockey sticks, pieces of leather strap used to punish children, and, my gosh, that shoe. Seven of the planned 13 panels were revealed shortly thereafter at the University of Victoria, where Newman is now the Audain Professor of Contemporary Art Practice of the Pacific Northwest in the Department of Visual Arts.

The full blanket was unveiled a few months later at Victoria City Hall. “Carey, you’re a hero to do all this,” one residential-school survivor said that emotional morning.

The blanket has since toured the country – Prince William and Kate Middleton saw it in Victoria during their 2016 royal visit, after it had been installed in a temporary exhibition at the CMHR in Winnipeg.

For Newman, that museum felt like home. About a year-and-a-half ago, he began talks with the CMHR, proposing this unprecedented sort of legal agreement.

The museum had witnessed the power of the work. Despite the legal challenges, it was on board. “I knew this was a national treasure,” Young says. An agreement was struck for a collective stewardship.

On October 16, the agreement came to life in the hours-long ceremony at the Bighouse, close to Newman’s traditional territory.

With all of the journalistic history between us, Newman asked if I would be there to witness the event – not necessarily to write about it, but just to be there. Normally this kind of request would leave me conflicted. I am supposed to be an observer, a reporter of stories. But this story has been a special one for me. I wanted to witness this part of it.

“What brings us here is a story – or a collection of stories – and it’s all the stories that are attached to the pieces on The Witness Blanket,” Newman said that afternoon. “And that journey of gathering those pieces … it had a transformational effect, impact on me.”

We heard some of those stories on Wednesday. They were, at turns, devastating and inspiring. And yes, transformational.

Jennefer Nepinak is a lawyer by training, has been instrumental in bringing The Witness Blanket to CMHR, where she used to work and remains a senior adviser. (She is now associate vice-president, Indigenous engagement, at the University of Winnipeg.) But that day, she identified herself by her family’s stories of loss. A residential-school survivor, her mother died alone in a hotel when Nepinak was very young.

Nepinak’s uncles were out playing one summer day when they were scooped by Indian Agents. One of her uncles recently described to Nepinak how for two years he slept facing the same direction – facing where he believed his parents were.

The youngest in this row of witnesses, Claire Everson, 17, talked about picking up a textbook about residential schools in Grade 10.

“I flipped a page and I saw my uncle. My heart sank.” Another page held a photograph of her grandmother’s sister. “That was a really big moment in terms of knowing that this isn’t over. Even though it wasn’t in my generation, there is so much more we need to learn about and so much we need to heal from.”

Now in Grade 12, and taking an elective in genocide studies, Everson said she was “so excited” to go back to school and tell her classmates about The Witness Blanket.

Once the handover had been made, there was a traditional ceremonial celebration. All of the witnesses were invited to make their way down to the earthy floor and dance around the fire. I hesitated; I don’t generally partake in the events I write about. But on this day I was more than an observer – I was a witness. I danced. 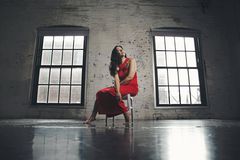 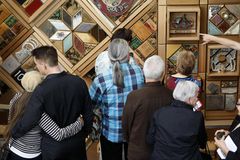