To gain a new perspective on the world, especially the one we live in, we can look to the art that surrounds us. In my case, I only had to look across the street.

My neighbour, Gillian Genser, has always welcomed me with open arms into her studio. The space feels like an arcane museum: the cupboards and tabletops are cluttered with specimens of driftwood, bones, shells and coral that she has collected over the years. It’s unnerving to be surrounded by so many things that once lived.

I first met the sculptor years ago when she knocked on our door in Etobicoke, Ont., to talk about protecting the ash trees on our street. Her garden of native plants stands out as the most charming on our block. Sometimes she scavenges in our neighbourhood - she might ask us not to use chemicals on wasp nests so she can use the abandoned shell in the winter. Other times, she finds new material through ethically-sourced vendors.

I didn’t know she was an artist when we met, I just knew she cared about trees. But, as I would come to learn, her artwork has found international renown, and has been featured in school curriculums in both the U.S. and Brazil.

Ms. Genser’s sculptures breathe spirit back into remains of life. Her creations depict our connection to the environment, and ultimately our connection to each other. They’re complex and made to be explored; under Ms. Genser’s guidance, I could appreciate their full depth as she deconstructed the pieces.

“When we’re trying to understand life, it means we’re trying to understand death,” she tells me, factually. She’s in her early sixties, keeps her dark hair tied up, and chooses her words with care. Today is a good day, she tells me, meaning she feels clear-headed. Her work is in part a comment on her own condition, a neurological struggle which was, in turn, brought about by her craft.

Being witness to her work has been something of a delicacy, especially now, when her art can’t be enjoyed by a large audience.

I remember her excitement a couple of years ago, when she first found wildebeest horns for sale, textured and twisted with a curvature that resembled kneeling legs. They would be perfect for her next sculpture, which she would name La Pieta.

The creation’s respiratory, reproductive and circulatory systems are made with natural materials such as bones and exoskeletons. The chest is covered with a shell, but look behind it and you will see an elaborate abdomen made with driftwood veins. The design of the sculpture allows the viewer to peer into the body and see La Pieta’s organs.

The sculpture’s disconnected head looks upon its own body. Her lungs are made from the nasal passages of a lamb, hinting at resurrection. Her uterus contains the remains of a bee, a representation of the fertility of the earth. Her hair is a wasps’ nest and the heart is a beehive: delicate last messages of bustle and vigour.

Ms. Genser had created a woman: a depiction of Mother Nature on her knees, holding her failing body.

“But perhaps she is also all of us, looking with pity and sorrow upon the injustice and cruelty perpetrated within the body of all humanity,” she explains, a nod to the past year. The sculpture represents us all trying to find compassion while we may be falling apart at the seams.

But Ms. Genser is no stranger to self-isolation and illness, two of the things that have changed our existence the most since the pandemic began.

Her work went viral in 2018 - specifically, a sculpture named Adam that is constructed from mussel shells. As a result of creating him, she now lives with heavy metal poisoning.

She started working on Adam in 1998, and spent 15 years sifting through thousands of shells for the perfect ones that would match the striation of the muscles in his body, then she ground and shaped them.

But shells are an example of an organism that bioaccumulates. Mussels in particular collect toxins and chemicals in their tissue. Years of working with them had allowed metals such as arsenic and lead to enter her pores and lungs. She now suffers from neurological damage, substantial hearing loss and permanently debilitating mental health consequences.

“I feel like with each piece I gain the inheritance of their life. They’re giving it to me. It’s a painful gift, but it’s a gift. And he was the first, so I got the first painful inheritance from him,” she says.

“I allow the remains to give me their voice,” she says, “and they have things to say.” 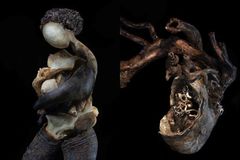