The unwary consumer who decided to spend $35 to enter the Banksy exhibition making its North American premiere in a Toronto warehouse will see lots of the prints that the anonymous British street artist has sold to underwrite his graffiti activism. One is Festival, a bitter image that shows music fans lining up to buy $30 T-shirts bearing the slogan Destroy Capitalism. The irony of this exploitative show unauthorized by the artist is enough to make a critic gag.

The Art of Banksy, which has grown in scale since first stops in Melbourne, Amsterdam, Tel Aviv and Auckland, is organized by art dealer Steve Lazarides, who was Banksy’s close collaborator and agent from 1997 until 2008, as well as concert promoters Live Nation and Starvox Exhibits. The organizers stress it contains no art ripped from the street; rather, it features about 80 works on loan from collectors who bought them online or at Banksy’s own commercial shows.

But Lazarides has no current relationship with Banksy and told The Globe and Mail the artist did not respond to a message when first informed of the show, which started touring in 2016. Apparently, neither Banksy nor his management have complained so far; the artist’s website says only that he is not represented by Lazarides. The dealer argues that Banksy belongs to the public and the public has a right to see the work, but when asked whether the artist would like the show, the dealer replied “Absolutely not.”

Under both Canadian and British copyright law, artists have moral rights in their work. When you buy a painting from a living artist you don’t buy the right to reproduce it on greeting cards. At this show, the gift shop stuffed with Banksy merch as well as promotional material featuring Banksy’s famed image of a girl with a balloon and the cartoonish face of a rat all seem to violate that principle. Furthermore, in Canada, an artist’s exhibition rights are also enshrined in law – work cannot be exhibited without the artist’s permission. The standard practice in Canadian museums, and in many international ones, is to pay artists fees for shows.

Of course, Banksy, who routinely lifts historic and pop-culture imagery himself, has never asked anyone’s permission to stencil his political cartoons on walls and buildings in Britain and around the world. You could argue he has forgone traditional artistic rights in his practice and when asked about the gift shop specifically, a Live Nation representative replied the work was in the public domain. There’s no question the internet is rife with unauthorized Banksy T-shirts and fridge magnets, but if the organizers want to create a legitimate retrospective of the artist’s work, they might consider setting a higher ethical standard than that of the online hawkers.

Certainly, you don’t inspire confidence in a curatorial project by playing fast and loose with international exhibition standards. Mounting a Banksy retrospective is bound to be a tricky proposition from an artistic perspective because the most important pieces, to the extent they survive defacement and demolition, are out in the street: Perhaps it’s not surprising, given its dubious credentials, that The Art of Banksy fails to rise to the challenge.

Street, site-specific and environmental artists will often create limited-edition multiples based on their larger works because they need something to sell to fund the projects. This show contains many such minor pieces, both prints and a few similar limited-edition canvases in which Banksy reprised images he had created for the street. The scene from Pulp Fiction, the children saluting a shopping bag and the Laugh Now monkey are all here. There is some documentary value in bringing these works together, but frankly, if you want to see lots of Banksy images, try Google and save yourself the price of admission.

There are also a handful of more significant pieces including a large cutout of the smiley-faced riot officer, a banner of the protester hurling a bouquet of flowers and a metal storefront shutter stencilled with the artist’s naughty image of Queen Victoria sitting on a naked woman. Removed from its urban context, the shutter looks lonely and bland; Lazarides’s own photographs of Banksy’s work in situ are more informative. The show also displays some of the work from an L.A. exhibition Banksy mounted in 2006, which includes Flag Wall, a large painting on wood that turns the iconic Iwo Jima flag-raising image into a picture of two youths raising the stars and stripes in a junkyard.

That’s about the closest you come here to street art, rather than mere reminders of it and, like most of Banksy’s images, it’s a visual joke. Lazarides says this himself in one of several chatty videos dotted around the show. “… His brand of politics is very simplistic. … He is taking very, very complicated situations and boils them down to a pithy one-liner which is what, I think, people want.”

That dismissive but accurate assessment of Banksy’s work explains why it isn’t an obvious subject for a museum-style show. Banksy is not the most sophisticated of street artists – for example, the French photographer JR, who Lazarides does represent, makes far subtler interventions into the public realm – but if Banksy’s simple work does have power, it is out in the city where its subversion works its quick magic in the double take of a passing pedestrian. It is work to be glimpsed rather than savoured.

So, having stripped Banksy’s art of its power while cashing in on its fame, The Art of Banksy finishes with its most impressive loan – a seven-metre-high version of Forgive Us Our Trespassing, a group graffiti project created in the shape of a stained-glass window – before moving visitors directly into the gift shop.

Yes, aping the title of Banksy’s 2010 documentary about street art, the show actually does ask us to literally Exit Through the Gift Shop. Lazarides said he liked the pun. The 50,000 people who bought tickets to The Art of Banksy before the show even opened can decide whether this last bit of chutzpah represents astounding cynicism or breathtaking naiveté. The rest of the world would be well advised to stay away.

The Art of Banksy continues at 213 Sterling Rd. in Toronto until July 11. 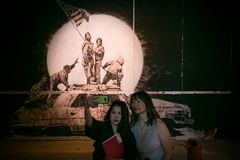 The Weeknd gets behind Hxouse, an incubator for emerging Toronto artists
May 24, 2018 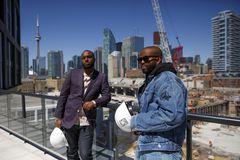 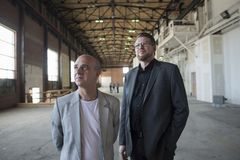 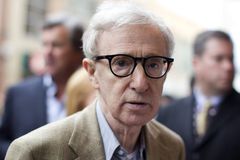