The pair of bulky glass buildings that make up the Université de Montréal’s new science centre look like lonely outposts of urbanity at the edge of a vast muddy field. The six-storey pavilion, which will open in September, occupies less than 10 per cent of a former railway yard, which the university plans to develop both as a second campus and as a social hub for the adjoining neighbourhoods.

But while the university and the city of Montreal promote the project as a means of social cohesion, many in Park Ex (as locals call it) say it will accelerate the gentrification that is already driving some of the city’s most vulnerable citizens from their homes.

Campus MIL, which stands for “Montréal + Innovation + Laboratoire,” is the largest university building project in Canada. A conceptual image shows the former rail lands, which are the size of 165 football fields, filled in with buildings, tree-lined streets and green spaces.

The U of M bought the land from CP Rail in 2006, with $120-million in aid from three levels of government. Breton says the university needs bigger and more modern spaces for its science and technology programs, and could not expand its main campus at the northwestern base of Mount Royal.

The $348-million science centre, which includes state-of-the-art research labs, will eventually be joined by a pavilion for math and informatics, another for innovation, and an administrative centre. The math pavilion will be developed in concert with two affiliated schools, Polytechnique Montréal and HEC Montréal, a business college.

Breton says he is aiming for greater integration of schools and science faculties, as well as closer association with Montreal’s growing artificial-intelligence and digital-technology sector. U of M faculty are already involved with the Montreal Institute of Learning Algorithms (MILA), an AI research centre, and the Institute for Data Valorization (IVADO), which aims to funnel research toward business applications. That will also be a goal of the planned centre for innovation on the new campus.

There will also be a new primary school, “dedicated to math, science and entrepreneurship,” Breton says. Students will be invited into MIL labs at the age of eight or nine. “I think that’s a way to build our future, to make science more normal and more visible to these kids, even before high school,” he says.

Anik Shooner, the U of M-trained architect who designed the science centre, says that even with $348-million to spend, “the budget was quite tight. It takes a lot of money to build those labs.” Her two glass buildings, which are connected by a library below the rising “landscape plaza” between them, follow the current trend in bringing in as much natural light as possible. Two lofty atria in the research wing will feel different at every daylight hour, she says, because the angle of light will always be changing.

The division of the buildings by the landscaped plaza was psychologically important, Shooner says, because the science centre will be the only building on the site for some years. “We wanted people to feel that they were in an urban area,” she says.

The interiors are designed for maximum utility, with few decorative touches and no expensive finishes. Shooner alludes to the land’s former purpose with four ground-level cafés built inside shipping containers. There are four, she said, because students in the four faculties – chemistry, physics, biology and geography – feared they would “lose their identity” in a single big café.

They will, however, share expensive equipment, which Breton says is both a cost-saving measure and an attempt to lower barriers between faculties. “It will mean better science, because the interface between disciplines will be much greater,” he says.

One surprising feature of the exterior is the windowless brick wall on the southwest side. Shooner says it’s only temporary, and will be removed when the university is ready to proceed with a major expansion of the centre from both ends.

It could take five years or more to build the math and informatics pavilion, Breton says. At that rate, the first students in the new science centre could be celebrating their tenth anniversary reunion before the campus is finished. The land, however, won’t stand empty. One half to two-thirds of it will be devoted to “temporary projects,” says Breton, including urban vegetable gardens, tree-planting programs for children and science-related events such as open-air lectures about the night sky.

Early on, the university formed an alliance with the city, which has pledged more than $150-million for new streets, parks and infrastructure. The city also developed a formal Social and Economic Development Plan (PDUES), published in 2013, for an adjoining area that straddles the upper end of Park Avenue and includes sections of four different boroughs.

“The main goal is to improve the quality of life in the adjoining areas, at every level,” says Jean-François Lusignan, an urban planner for the city. The goals include 8,000 square metres of new public spaces and 225 units of social housing. One project has already created 54 such units near Castelnau metro station, he says.

“There’s a natural transformation going on, and we’re trying to control it," says Louis-Henri Bourque, interim director of urbanism for Montreal. AI and technology companies have quartered themselves nearby, and gentrification is spreading from trendy areas such as Mile End and Mile Ex. “We’re very optimistic. We’re in negotiations with a couple of private owners [in Park Ex].”

The city’s ambitions for the PDUES area took a serious hit, however, when it became the losing bidder on a building that already served as an informal social hub and low-rent housing site. The five-storey Hutchison Plaza in Park Ex was sold in 2017 to a private developer, who cleared it out for luxury condos. The former tenants included religious spaces, a language school, a local radio station, and services for refugees and immigrants, who make up a large portion of the Park Ex population. Hutchison Plaza, the site of angry confrontations between builders and local residents last summer, is just inside the PDUES area.

“I would be very surprised to see the city buy anything at all, because prices are so inflated,” says Faiz Abhuani, director of Brick by Brick, an innovative community group that is seeing its own plans to build a small affordable housing complex hampered by a steep rise in Park Ex property values. “I don’t know why they didn’t do something earlier. They knew this was happening,” Abhuani says. Nearly 1,000 Park Ex households, he says, are already on a waiting list for subsidized housing.

Park Ex has been a haven for waves of new immigrants since the 1950s, and is now home to a large South Asian population. According to a Centraide study in 2016, 44 per cent of the residents spend 30 per cent or more of household income on housing. Statistics Canada considers 30 per cent the cut-off point for housing affordability.

Giuliana Fumagalli, mayor of the borough of Villeray-Saint-Michel-Parc-Extension, said recently that the advent of MIL is “putting pressure on available rentals and will force our most disadvantaged households to leave the area.” The science centre alone will bring in 2,000 students and 200 professors, according to the university.

Urban planner Lusignan acknowledges that for the city’s housing goals, “the main difficulty is that prices are skyrocketing.” However, he says that Montreal could use its power to expropriate, or to claim a new right of first refusal on designated properties. In the event of a private sale of such a property, the city could step in and buy it for the same price.

Bourque points out that the site being developed on private land right across the street from the science centre, in Outremont, will eventually contain 1,300 dwellings, including up to 195 units of affordable housing and an equal number of social-housing units. That will likely lessen the impact of the influx of students and faculty on Park Ex.

However things shake out, there’s little doubt that the diverse urban area around the campus is facing imminent and significant change. It remains to be seen whether the campus will help bring communities together, and not merely accelerate the eviction of its poorest neighbours. 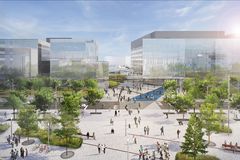