It lit up, it lowered, it twirled. Vancouver artist Rodney Graham’s 3,400-kilogram kinetic sculpture went for its first of many spins under the Granville Street Bridge Wednesday, to the delight of hundreds of people who had gathered on the uncommonly cold night. They whooped, applauded and posted selfies.

Vancouver Mayor Kennedy Stewart called it “the most important piece of public art in the history of our city” and referred to Mr. Graham more than once as “a legend.”

Spinning Chandelier – which as of next week is expected to activate twice daily (at noon and 9 p.m., although that may change) – was dreamed up by Mr. Graham and his collaborators, paid for by Westbank – the developer building architect Bjarke Ingels’ massive Vancouver House a few steps away – and brought to life by a skilled cross-border team that included U.S. foundry workers and City of Vancouver engineers.

“I don’t know how to do anything like that,” Mr. Graham told The Globe and Mail before the unveiling. “It’s literally kind of over my head.”

During the interview, the day before the inaugural spin, Mr. Graham admitted to some sleepless anxiety. “I hope it keeps functioning, because I have never really made a kinetic work like this before,” he said.

The installation is a much-enlarged model of the one he used in his 2005 film, Torqued Chandelier Release, an elegant thought experiment inspired by Sir Isaac Newton’s famous bucket argument, examining the effect of rotation on water in a pail.

While there was a palpable sense of excited anticipation about Spinning Chandelier, there was also some grumbling. About its cost – which ballooned from original expectations to $4.8-million; about what it means to put this monumental symbol of opulence under a bridge in a city where there is so much poverty and homelessness.

“I suppose five years after I’ve started it, the dialogue has changed kind of a bit and I’ve thought about these things more too and it’s probably not something … that I would initiate right now,” Mr. Graham told the Globe. “I kind of hope people take it in the spirit that I made it,” he added. On opening night, did they ever.

Before the big reveal, Mr. Graham thanked a long list of people, beginning with the 17th century revolutionary scientist who started it all. “Sorry, it’s not a very inspiring speech,” Mr. Graham said. That’s okay. The inspiration came from above, a dazzling whirl of faux crystal, lighting up the darkness on a freezing Vancouver night. Montreal coalition that snagged a huge property for arts and community development splits over division of the spoils
Subscriber content
August 6, 2019 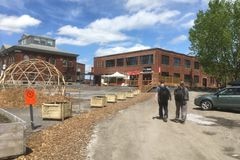 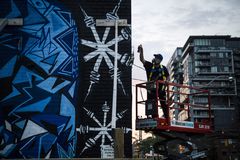