In Alanis Obomsawin’s 1977 film, Mother of Many Children, a woman is briefly shown pulling prints from an inked and engraved stone, with her baby strapped to her back. A quarter-century later, Obomsawin made a series of drypoint prints of Indigenous women carrying their infants on cradleboards or in slings, and called them Mother of Many Children.

These and other graphic works by Obomsawin are on display at the Montreal Museum of Fine Arts. The 40-odd plates and images intersect with her many National Film Board documentaries about the joys and sorrows of Indigenous peoples, while allowing her the freedom to explore visionary states and dreams.

The dozen prints in Mother of Many Children celebrate the close physical bond of Indigenous mothers and their infants. Some of Obomsawin’s images take shape from a few bold strokes. More often, the density and flow of the woman’s robe or blanket comes from many tiny circles or fine sweeping lines, which in at least one case seem to flow down from the woman’s hair.

The women’s features are simply rendered and dignified. They often look away from the viewer; they have more practical things to do than to see themselves being seen. Their hands, when visible, are large and strong. One woman works at a Singer sewing machine, with her baby’s cradleboard leaning against her body.

The fate of these infants and their mothers has too often been tragic, as we know from reports on Canada’s residential schools, and on murdered and missing Indigenous women and girls.

Obomsawin’s Indian Residential School 1934 looks like a class photo, but the children seem to be holding onto a rope or wire that pens them in.

What Happened to My Child? depicts a woman whose head floats at the top of an enormous blanket covering, while a seagull, traditional symbol of rapacity or endurance, flies close behind.

By printing some images from the same plate on red, blue or green papers, Obomsawin provokes subtle changes in how aspects of the image relate to each other. She also adds texture to many prints by using papers inlaid with strands or specks of grass, in that way also alluding to the figures’ connection to the land.

The show also includes numerous prints of horses, which Obomsawin says often appeared in her childhood dreams. Free Horse depicts the animal almost as an energy field, its eye and ears clearly drawn, but the body and its movement taking the form of whirling lines. In The Visit, rabbit, bear, frog and turtle sit in or hang from a canoe, which rises from the water at a 45-degree angle.

The Abenaki of Odanak, Obomsawin’s home community northeast of Montreal, are renowned for their basketry, which supported Obomsawin’s own family. The exhibition includes some exquisite samples of the craft. The lid of a sweetgrass and black-oak wedding basket by Emilia M’Sadoques is studded with tiny upturned baskets, which also hang from the rim of the lid and the mouth of the bird that serves as a handle – 412 miniature baskets in all. A poem attached to a drypoint portrait of an Abenaki basket-maker describes sweetgrass as “the hair of our Mother the Earth.”

Obomsawin’s 1985 recording Bush Lady (re-released last year) haunts the galleries in a looping excerpt from the title song, about an Indigenous woman who loses everything of value to her when she moves to the city.

The MMFA has unfortunately misidentified the media used for some of Obomsawin’s work – for example, calling one image a drypoint, while displaying the copper etching plate used to make it. This exhibition would also have gained valuable context by allowing visitors to see Mother of Many Children, Obomsawin’s beautiful first feature documentary, about the role of women in Indigenous cultures.

Alanis Obomsawin, Printmaker. An Artist and her Nation: The Waban-Aki Basketmakers of Odanak continues at the Montreal Museum of Fine Arts through Aug. 25. 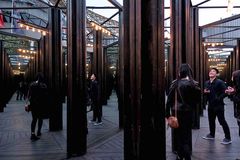 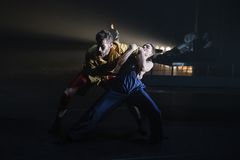 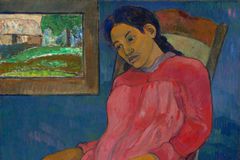