Dana Claxton’s maternal great-great-grandparents crossed the invisible border (“border”) into Canada around 1876 with Sitting Bull and thousands of other members of the Hunkpapa Lakota Nation. They were with their young daughter Ayuta Najin Ktewin (Kills the Enemy that Stood Standing Woman) and endured treacherous, starvation conditions. Their long march to what is now Saskatchewan followed the defeat of the U.S. Army’s General Custer at the Battle of the Little Bighorn. By 1882, an encampment of about 100 lodges stood in the Moose Jaw River Valley, which became known as The Sioux Camp.

This history has helped shape Claxton – both the person and her artistic practice. Her new exhibition at the Vancouver Art Gallery, Dana Claxton: Fringing the Cube, is the first career survey of the Hunkpapa Lakota (Sioux) artist’s work. It lands at a seminal, precarious time in Indigenous-settler history, and the exhibition reflects that in many ways.

With the Truth and Reconciliation process and the Idle No More movement, an overdue spotlight is being shone on the injustices of colonialism. But Claxton says that while some people are referring to this political era as post-Reconciliation, most Canadians don’t even know what Reconciliation is. She also points out that this is all so new; it was in her own lifetime that First Nations people finally received the right to vote.

Claxton, 59, was born in Yorkton, Sask., grew up in Moose Jaw and now lives in Vancouver. She is a multidisciplinary artist known for her film, photography and performance. (She is also a writer, makes children’s programs and documentaries, and teaches.) Her work, which has made it to prestigious international venues such as the Metropolitan Museum of Art and the Museum of Modern Art in New York, is provocative, beautiful and often autobiographical. And it cleverly and boldly reclaims narratives around Indigenous culture.

“It’s fascinating times for Indigenous people,” Claxton said when I asked her to what extent she was motivated by contemporary politics in putting the show together. Early in her career, she took great offence when a gallery referred to her as an activist. She is an artist, she explains, responding to what she sees.

Her work critiques and reclaims racist narratives, often by reminding visitors of the stereotypes we have been served, some of us from childhood. Her 2003 film 10 intercuts different adaptations of the Agatha Christie murder-mystery Ten Little Indians, based on the nursery rhyme. As Claxton described, I saw this work in relation to my own experience. Had I been taught that racist rhyme as a child? Had I recited lines about “little Injuns” dying off in various ways? Or giggled at them?

Claxton’s Indian Candy (2013) project was created mostly with images she found by googling “Wild West.” These images, high-gloss and colour-tinted or pixelated, include Canadian Mohawk actor Jay Silverheels as Tonto in The Lone Ranger. For many of us, these sorts of popular culture portrayals formed early impressions of Indigenous people.

The name of the exhibition, curated by Grant Arnold, the VAG’s Audain Curator of British Columbia Art, contains layers of meaning. Fringe holds a significant function for Indigenous peoples of the Great Plains. It has a capacity to disperse rain, and is very sensitive to its environment, moving in response to the slightest provocation – a bit of a breeze, or a step forward. The show’s title also references the place Indigenous art has traditionally occupied in the Eurocentric mainstream art world – on the fringes. Now, the fringe is occupying the exhibition space, “bringing both an Indigenous sensibility into spaces from which they’ve long been excluded, but also offering for an Indigenous audience a chance to see themselves reflected in these spaces,” Arnold explained during a tour.

Fringe is present in some of the photographic works, including Headdress – Jeneen (2018). In the powerful installation Buffalo Bone China (1997), a pile of smashed English bone china – made with the bones of buffalo – sits in front of a video of herds of buffalo, once so plentiful. The china remnants are roped off in a circle, fringe hanging from each stanchion.

The four-channel video installation Sitting Bull and the Moose Jaw Sioux (2004) examines the history that brought Claxton’s maternal ancestors to Canada. In the centre frame of the triptych, stories about Sitting Bull are recounted by elders who heard them from their own families. This is framed by images that include wildlife, archival pictures of Sioux people, and newspaper headlines such as “Sitting Bull Sat In Moose Jaw.”

On a separate wall, off to the right, is contemporary footage of what’s left of the encampment – lush, wild, grassy land, so different from the farmland that covers much of the province. It now belongs to the city of Moose Jaw. Arnold, on his tour, indicated that there is a possibility of that land being developed.

The oldest work in the show, the feminist triptych Untitled (c. 1990), has never been exhibited before. There is also brand new work, including the fireboxes – Claxton’s term for lightboxes – Lasso (2018) and NDN Ironworkers (2018).

Fringing the Cube also includes work by other artists, selected by Claxton from the VAG’s permanent collection.

This juxtaposition is particularly powerful in what they have dubbed the “Red Room,” a large gallery where Claxton’s photographs that form The Mustang Suite (2008) are installed. Claxton both honours the importance of the colour red in Indigenous culture and challenges and reclaims its use from the ugly stereotyping present in terms such as “the red man.”

To complement the five-photograph installation On the Red Road (2016) depicting an Indigenous woman in progressively diminishing red footwear – from over-the-knee stilettos to bare feet – Claxton selected Gathie Falk’s Bootcase with 1 Shoe with Roses (1973). Other artists’ work in the room includes Red X (1969) by Joan Balzar, Red Painting (1964-65) by Gordon Smith and Falling Leaves on Red Sky (1970) by B.C. Binning – all B.C. artists.

When I asked Claxton what she would like viewers to carry with them from this show, she said, “I hope that they see themselves. And in relationship to Indigenous people, whatever that might be. But it’s really about seeing. But seeing leads to thinking and being and doing. So then what do you do after you see?”

The final work in the show is the four-channel video installation Rattle (2003), which Claxton has described as an attempt to bring prayer into the gallery space. Rattles, made by Claxton, form the soundtrack along with peyote songs and soul-stirring electronic music by Claxton’s frequent collaborator, Lil’wat composer Russell Wallace. You can hear the music from the previous rooms, it becomes louder as you approach this final gallery, and it draws you in.

In the opening essay to the show’s catalogue, the Lakota artist and writer Layli Long Soldier writes about the importance of generosity in Claxton’s work and the Lakota culture. She explains the Lakota custom of “giving something to a visitor in one’s home before they leave; to always send a guest away with something to hold onto.”

Rattle felt like that parting gift. A moment to sit in the dark and reflect on historical wrongs and what is happening now. I sat and listened and felt lifted by the beauty and strength I had just witnessed in this exhibition, and felt the courage to walk out and do what needs to be done.

Dana Claxton: Fringing the Cube is at the Vancouver Art Gallery until Feb. 3. 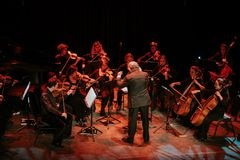 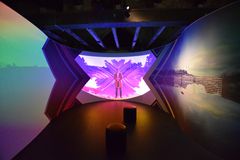