A digital native wandering into a current art exhibit at the Ryerson Image Centre might be dismissive of the small white-and-black plastic rectangles heaped by the thousands into a pyramid on the floor. What are these things, and why should I care? Members of the analog generation, on the other hand, will probably smile wryly: Aha, yes – the slide problem.

The big pile, created by artist Susan Dobson, is made up of discarded photographic slides she rescued from the University of Guelph, where she teaches photography. Digital technology has rendered obsolete all the slides the university once used to teach art history, but that hasn’t stopped Dobson from turning them into art itself.

Today, Google Slides has appropriated the term and most of us use it that way, simply taking “slide” to refer to one image or a page in a digital presentation. But many people still have stacks of physical slides mouldering in the basement – pictures of weddings, babies and holidays; photographs taken by their parents or their grandparents. In their heyday – from the fifties through the seventies – diapositive transparencies were a higher-quality and cheaper way of producing colour photography, rather than the two-step process of developing negatives and then making prints. But slides had fallen into disuse by the 1990s and Kodak discontinued its popular Kodachrome slide film in the 2000s.

Amateurs and professionals stopped creating new slides as digital cameras – and then our smartphones – took over the job, but that doesn’t mean we figured out what to do with all the existing ones. In my family, we occasionally promise ourselves we will finally sort through those old slides and speculate over whether we still have a functioning projector.

Some people feel nostalgic about their old slides; others feel burdened by them. For me, they also have a quietly terrifying aspect: I learned my art history through images projected from slides, and slide exams were a torturous feature of academic life. Students were required to recognize hundreds of famous artworks, and correctly name the artist, the date and the medium. At the University of Toronto’s slide library, we jostled for the few copies of each carousel and would often find the contents were outdated or missing key images. Tracking down the specific Botticelli or Matisse the professor had shown in class could sometimes prove impossible. Today, such a shortage seems quaint: Click on Google Images and there is almost every painting Matisse ever painted.

It’s these art history slides – and the canon of Western art that they represented – that Dobson takes as her subject. Relying on discarded collections from both Guelph and Ryerson University, she has created a series of large-scale inkjet prints from digital photographs of the slides themselves, mounted in round carousels or tucked away in pink and blue paper sleeves in big metal drawers, each one carefully labelled. These new photographs, rigorous yet gorgeous, are highly formal, reducing the apparatus of the slide library to an evocative geometry. Photographed from above, the carousels appear as sacred mandala; a stack of them seen from the side becomes an ancient tower.

The combination of pristine beauty and obsessive codification reminds me powerfully of the cataloguing projects of the late Arnaud Maggs, the Toronto photographer who would shoot the same person in the same position multiple times and mount the results in a grid, as if to pin down a single human face for once and for all. And in recording the demise of the analog, Dobson’s project follows directly on the work of Toronto photographer (and Ryerson professor) Robert Burley, who shot a series in the 2010s documenting the decay and demolition of chemical photography plants in North America and Europe.

But in recording the old slides, Dobson also has some sly points to make not merely about the demise of the analog, but also about what it was the analog represented. The slides in their envelopes stuffed into packed drawers represent the great artists that Guelph students were required to study: Rembrandt, Monet, Michelangelo, Van Gogh, Gauguin. Yet all the art of Africa fills one fraction of an otherwise empty drawer. One series of photographs from Ryerson’s collection represents the history of photography itself, as told through various lectures: They cover Walker Evans, Edward Weston and Ansel Adams, as well as “Women and other Visions.”

There is sheer aesthetic delight to be had in Dobson’s photographs, as well as an intriguing ambivalence – artist and viewer are caught between a desire to cherish the past and a need to question it. If you throw out all those slides, you may forget what it is you are trying to change.

It seems unlikely that analog slides will ever be subject to the trendy renaissance that vinyl has enjoyed – but in Dobson’s hands, they become a poignant yet pointed statement about how we value art. 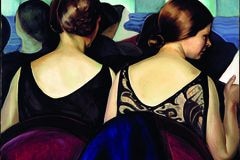 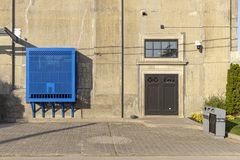 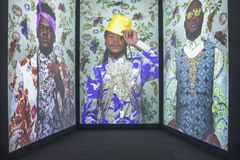